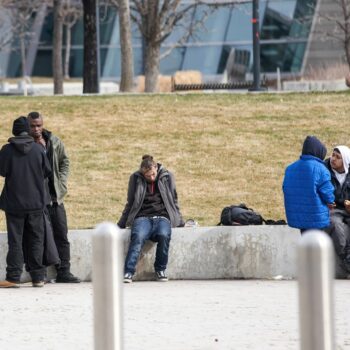 “We cannot arrest our way out of homelessness. Unsheltered communities are often further entrenched in day-to-day difficulties due to costly and needless citations or arrests.”

21-year-old Joey Fiala said he’d been to jail twice for public camping in Fort Collins, Colorado. The youth, who found camping and comradery in a tent city located on the side of a bustling railroad track, has a rough road ahead of him. While the title “homeless” isn’t officially documented as part of his identity, his criminal record will be marred with the etchings of this checkered past for years to come, making it difficult for him to obtain housing and employment both now and in the future.

In the face of anti-homeless legislation, encampment residents far and wide head for the hills come nightfall, eager to avoid the watchful eyes and ticket-happy fingers of law enforcement officials.

Masking the crisis in this manner is precisely why our government drafts laws making it illegal for people enduring homelessness to sleep, stand, sit, or otherwise engage in life-sustaining activities in public.

These pieces of legislation, which currently exist in 48 states nationwide, do nothing to solve homelessness. Like a smoke-in-mirror magic trick, they simply shift the public focus long enough to move the problem and make it look like it’s disappeared.

Multiple studies have revealed this fact, but that doesn’t seem to sway public opinion. As crushing as it is to admit this, we are swiftly becoming a society more concerned with the visibility of homelessness than the state of it.

In October 2022, the ACLU of Utah released a riveting report detailing the harms and horrors of homeless criminalization and solidifying the growing concerns of housing advocates.

The report, entitled “Displaced and Dispersed: The Aftermath of Operation Rio Grande,” is a follow-up to previous examinations of the ORG Project, a law-enforcement-led initiative launched in 2018.

Operation Rio Grande, more commonly referred to as ORG, was presented to the public as a way of helping unsheltered individuals out of homelessness. However, according to the Salt Lake Tribune, it was actually criminalizing homelessness and failing thousands of individuals in the process. Investigative reporters quickly uncovered that by 2020, 80% of the funding for Operation Rio Grande had been spent policing and, in many cases, imprisoning unhoused Salt Lake City residents.

At the time, ACLU Deputy Legal Director Jason Groth called the program “a misguided attempt to use the criminal legal system,” and rightly so…

Under the banner of public safety restoration, law enforcement officials inundated the houseless community with arrests resulting in 1,442 felonies and 3,323 misdemeanors in just the first two years of the program’s inception. In response, the ACLU of Utah released three separate reports critiquing the program and alerting the public of its negative results and overall ineffectiveness to solve the real homelessness crisis.

As of the summer of 2020, Operation Rio Grande was described as dwindling and is now considered obsolete. However, that doesn’t mean policing hasn’t left its mark on the lives and futures of thousands of people.

The latest effort published by the ACLU scrutinized the results of the now-defunct operation, drawing the following conclusions based on provided data:

In the end, the slew of citations and arrests cost taxpayers millions. They cost houseless community members even more.

Operation Rio Grande did not help people exit the burdensome state of homelessness. It added to the burden by forcing unhoused people to prioritize court dates over necessary medical appointments, miss days at work and lose wages or employment opportunities, incur hefty fines, spend what little savings they had on court fees and transportation, and endure many more hardships.

To quote the source material directly, “unsheltered individuals often find themselves in a worse place than they started before the camping citation, even when the case is dismissed.”

We Can No Longer Afford to be Silent on this Issue. Talk to Your Policymakers About Drafting Laws That Prioritize Housing Over Handcuffs

Studies continue to prove that criminalizing homelessness does not rectify the situation – not even temporarily. Salt Lake City spent $55.3 million in taxpayer money to prove yet again that policing homelessness is ineffective.

When housing advocates are silent, politicians pedal shifty tactics at the podium, appeasing the public by sweeping homelessness out of sight rather than presenting any actionable long-term solutions. Urge your legislators to replace anti-homeless legislation with laws that make housing a human right.

Trust is Hard Earned When Just About Everyone Despises You With violence against unhoused people rampant, sick pranks an unfortunate possibility, and police officers as unhelpful as always, it’s difficult to know who...

For the upcoming Innovations and Solutions to End Unsheltered Homelessness Conference, the Alliance staff tried something new: we asked you for presentation proposals to help shape the content of our conference. This...

The Justice40 Initiative Supports Clean, Sustainable Housing Construction and Climate Investments There are times when seeking justice can be exhausting. Newsfeeds and social media timelines are inundated with imagery...