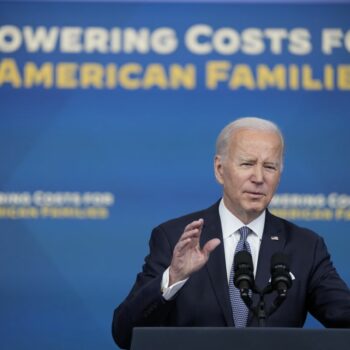 Rents Are Too High, Millions Are Struggling to Remain Stably Housed

The Biden Administration is considering executive actions to expand protections for cost-burdened renters as rent control measures expand across the country.

Some moves the administration is considering include a federal law to seal eviction records, standardizing leases, and creating a federal right to counsel for tenants who are taken to court by their landlord over unpaid rent. The administration is also considering creating a federal law to prohibit source of income discrimination, which is a common hurdle for renters with housing vouchers.

The moves could come as soon as the end of January. Meanwhile, rents appear to finally be cooling off in several parts of the country, although they are still up more than 5% year-over-year as of December. However, it costs renters about 20% more to lease an apartment today than it did two years ago, Redfin data shows.

More than 50 lawmakers, such as Rep. Jamaal Bowman, a Democrat from New York, and Sen. Elizabeth Warren, a Democrat from Massachusetts, have suggested that the administration move to direct the Federal Housing Finance Agency, which regulates the mortgage market, to establish renter protections for tenants in properties financed with federal mortgages. They also called for the administration to encourage the Consumer Financial Protection Bureau to coordinate with the Department of Housing and Urban Development to investigate corporate landlords accused of discrimination, as well as other protections.

“Simply put, the rent is too high, and millions of people across this country are struggling to stay stably housed as a result,” the coalition said in a letter dated January 9.

The rising cost of housing hit renters hard during the pandemic, and renters bore the brunt of the impact.

Renters make up about one-third of all households in the US. However, these households typically earn a median salary of about $30,000 less than the typical homeowner, according to Pew Research.

At the same time, Pew found that the median monthly cost of rent increased by about 12% between 2019 and 2021, which is about twice as much as inflation increased over the same period. The number of renters who paid more than $1,000 per month also increased from 44% in 2019 to 51% in 2022. Renters in large metro areas like Boston, Atlanta, and Miami saw double-digit rent increases.

The increasing cost of rent has served to “increase the likelihood of evictions, foreclosures, homelessness, and health issues for people across the country,” the letter said. In turn, the lawmakers said the federal government must “pursue all options on the table that will help renters stay housed in the short-term” while continuing long-term efforts to address the problem at the local level.

According to data from the National Multifamily Housing Council, 19 state legislatures took up rent control proposals last year, with nearly all moving to expand it. That is despite research from the Brookings Institution, which suggests that rent control may hinder the ability of local governments to expand the supply of affordable housing. The low housing supply is one of the main drivers of recent rent increases.

“It’s a shame because rent control attempts to address the symptoms of the problem while making the core issue worse,” Jim Lapides, the vice president of communications for NMHC, told NPR in November 2022.

Landlords across the country have argued that rent control policies are bad for their business.

For instance, one landlord in Boston told the state’s Rent Stabilization committee that rent control is tantamount to “slavery” because it would require them to work without getting paid. A landlord in Wyoming told local lawmakers that imposing rent control incentivizes “slum lords” to provide substandard housing to their tenants.

Still, states like California, Maine, and Florida have charged ahead with enacting or expanding rent control protections.

For example, voters in Orange County, Florida, approved an ordinance that prevents landlords from raising rents above the rate of inflation.

California voters approved a ballot measure that capped rent increases a 3% per year. Meanwhile, the LA City Council expanded its rent control provisions, including strengthening its “just cause” eviction protections, which lays out specific instances in which a landlord can evict someone from their home.

For many renters, the cost of waiting for relief is almost as high as their rent.

Mandy Gerth, a field manager for advocacy group Forward Montana, recently testified against a bill circulating the Montana legislature that would restrict the ability of local governments to implement rent control policies. Gerth told the committee that the state’s increasing cost of living has made it difficult for her family to find affordable housing after she made a career change.

About 27% of renters in Montana have seen their monthly rent increase by at least $250 over the past 12 months. The ranking showed that Montana has the third-highest share of renters facing rent increases across the country.

The pandemic proved that we need to rethink housing in the United States. It also showed that providing additional support and protections for renters is a clear-cut way to reduce future increases in homelessness.

What Can (and Can’t) Local Government Do to Address Homelessness?

More and more, local governments like cities, towns, and counties are finding themselves at the forefront of the homelessness crisis. Who do you call when you need a pothole fixed, or to report a downed tree branch...

Gov. Gavin Newsom promised to earmark $750 million to sweep homeless encampments during his 2023-2024 budget proposal on January 10. Overall, California will operate with a budget of $297 billion over the next fiscal...

The Series of West Coast Storms Sends People Experiencing Homelessness Scrambling for Shelter If you’re generally tuned in to what’s happening in the world, you’ve probably heard at least a little about the powerful...

What Can (and Can’t) Local Government Do to Address Homelessness?