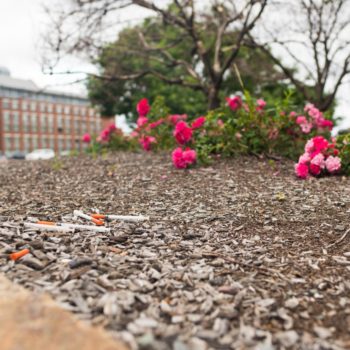 For years, Boston city leaders had used aggressive tactics to break up encampments at Massachusetts Avenue and Melnea Cass Boulevard, known colloquially as Mass and Cass. As of 2021, the intersection had become home to a tent city consisting of 300 people living in 100 tents, according to the Boston Public Health Commission.

Many who lived at the site were experiencing opioid addiction. Nearby addiction services attracted encampment residents to the area, including two methadone clinics and one of the city’s few syringe exchanges.

Over the past few years, there have been many attempts to break up the encampment. In 2019, there was a wave of arrests. Then in 2021, an opioid emergency declaration cleared the encampment for a few weeks. This past January, officials broke up the camp again under current mayor Michelle Wu.

Elected officials addressing Mass and Cass have often taken the position of public health. They send outreach workers with police officers to offer treatment services and temporary housing. However, despite attempts to clear the area and provide these homeless people with housing, the encampment repeatedly reforms. The result undermines the city’s claims that there is enough adequate housing to divert people from camps.

What’s worse is the failure of this approach has deadly consequences. Until recently, few knew how common drug overdose deaths were among this specific population and homeless Boston residents, in general.

A study published in January shed light on the depth of drug overdose deaths among people experiencing homelessness in Boston. It is the most extensive such study in the nation.

The report, published in the Journal of the American Medical Association, followed 60,000 individuals experiencing homelessness in Boston between 2003 and 2018. Drug overdoses, primarily opioids, accounted for 1,727 deaths of the 7,130 individuals who died during the course of the study. That is a staggering 1 in 4 fatalities caused by drug overdose. Even more concerning is the mortality rate of drug overdoses increased over the 15 years of study. That rate is now 12 times higher than the Massachusetts general population.

Over time, opioid overdoses were more likely to be from fentanyl and involve other drugs, matching trends in the general population. The study is the most comprehensive picture yet of the disproportionate toll that the opioid epidemic takes on unhoused Americans. They already suffer from instability that makes it challenging, if not impossible, to enter recovery.

“I think there is a lot of evidence to support things like harm reduction strategies, like supervised consumption sites,” said Danielle Fine, one of the report’s authors.

The report showed that drug deaths hit white people experiencing homelessness at much higher rates than other groups. But the overall share of homeless Black and Latinx people who died of an overdose was rising faster than whites. Fine says the disproportionate share of drug overdoses among whites relates to how they first experienced homelessness.

“The path toward homelessness differs according to race and ethnicity,” she said. “Among Black and Latinx individuals, it’s discriminatory housing policies and involvement in the criminal legal system. White individuals have higher rates of preceding substance use disorder and addiction.”

Many of those who participated in the study had passed through the Mass and Cass encampment. Last October, then-sitting mayor Kim Janey used the opioid emergency as justification to clear the encampment. In an executive order, Janey reminded voters that people in the neighborhood had moved from across the state for work, suggesting the encampment was a business deterrent.

“These encampments block sidewalks and access and egress to several streets, lack clean water and adequate hygiene facilities, and have been the site of numerous sexual assaults and other violence,” the executive order declared. “These encampments generate two dump trucks of trash and debris daily, create rodent control issues and infectious disease outbreaks, despite scheduled cleanings and daily street sweeping.”

Declaring that the city would be dismantling tents at the encampment, the order stated that officials would not discard people’s property. The order also stated residents would receive advance notice before tents were decamped and that no tent would be dismantled if that individual did not have a city shelter bed available for them.

Despite an ACLU lawsuit, officials broke up the encampment for several weeks before it once again reformed. The responsibility to handle Mass and Cass then fell to newly-elected mayor Michelle Wu, who took office in November.

Wu appointed Dr. Monica Bharel to lead the cleaning of the encampments.

Bharel conducted a series of listening sessions across the tent community and with neighborhood organizations. However, on January 12, the encampment was shuttered again. The city told The Boston Globe 154 of 300 encampment residents had transitioned to temporary housing. But it did not say how many people declined shelter or were turned away. According to the Globe, people have been re-congregating in the area in the weeks since the encampment was closed.

For years, advocates have called for more harm reduction services distributed across the city. In addition to saving lives, it would reduce commute times for people using opioids. IT would also allow people to access treatment close to their support networks.

Official actions, however, have taken a different approach.

In 2014, the city abruptly closed the only bridge to Long Island, home to a nearby addiction treatment center and the city’s largest homeless shelter. The closure displaced 225 people experiencing addiction who needed services. Could it be a coincidence that the Mass and Cass encampment then saw significant growth? After all, it was within proximity to two methadone clinics and a syringe exchange.

Dr. Bharrel and Mayor Wu have expressed support in decentralizing services and expanding harm reduction services, but doing so will not be easy. Like many cities, neighborhoods across Boston have pushed back on syringe exchange proposals. And the negative media attention surrounding Mass and Cass will likely exacerbate peoples’ fears.

Housing is Key to Addiction Recovery

Across the country, opioid overdoses are higher among homeless individuals than among the general population. According to the National Healthcare for the Homeless Council, one recurring issue is high-barrier addiction recovery, leading patients to get referred to services they don’t qualify for. While safe consumption sites can significantly reduce deaths, there are currently only two legal, safe consumption sites in the country – both in NYC, as documented by Invisible People.

But the most significant barrier to recovery is housing. According to an NHCHC report, “Addiction can cause and prolong homelessness, and the experience of homelessness complicates one’s ability to engage in treatment.”