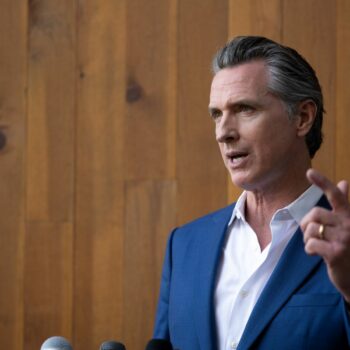 Overall, California will operate with a budget of $297 billion over the next fiscal year, which includes a general fund of more than $223.6 billion and more than $15.3 billion to address homelessness, Newsom said.

While he pledged there would be “no cuts” in funds for homeless services, Newsom also vowed to hold local governments accountable for not adequately addressing the number of unsheltered homeless in their jurisdiction.

“People have had it. They want to see these encampments cleaned up,” Newsom said.

Unsheltered homelessness has become a flashpoint for many California residents, as illustrated by the reactions to a viral video of a San Francisco art gallery owner spraying a homeless woman outside his store with water to get her to leave.

The gallery owner, Collier Gwin, issued a semi-apology in an interview with local news station ABC7, saying it is an “awful thing to leave her on the streets.” He added that he’s called the police multiple times because the woman was disruptive.

Local editorial boards have also called on Newsom to do more to address homelessness in the state.

The Los Angeles Times editorial board called on Newsom to hold himself accountable for the increasing rates of homelessness across California. The state is home to approximately 30% of the nation’s homeless.

“When Newsom took office in 2019, the budget for homelessness was a mere $500 million,” one editorial reads. “And for years, the state let it slide when some cities and counties didn’t build enough housing for their populations.”

“As a result, there is not enough affordable housing for low-income people, who can fall into homelessness, particularly if they have other problems such as mental illness or substance abuse. There is not enough permanent housing for homeless individuals. And there are not enough mental health, drug treatment or other services that can help keep vulnerable people stably housed,” it continued.

The Sacramento Bee’s editorial board said Newsom’s budget reveals “an unseriousness about the issue that helps explain California’s extraordinary failure to deal with it” and said Newsom can’t “dodge his responsibility as governor” by trying to pin the blame on local governments.

California’s budget often oscillates throughout the year as state financial experts get a better picture of the state’s tax receipts. However, Newsom promised he “won’t cut a penny” of the $750 million that is earmarked for encampment cleanups even if the state’s financial outlook changes by the time the budget is revised in May.

“People want to see this money put to good use,” Newsom said. “They demand results, and I expect results.”

The League of California Cities, which includes the mayors of the state’s ten largest cities, issued a statement shortly after Newsom’s budget proposal, saying that “one-time investments won’t end homelessness.”

“We need ongoing state funding and a coordinated approach with clearly defined roles and responsibilities for all levels of government that supports long-term solutions,” it continued.

Meanwhile, local mayors are taking the issue into their own hands.

L.A. Mayor Karen Bass declared a state of emergency shortly after assuming office in December 2022, aiming to help move people off the streets and into shelters or services. The LA County Board of Directors echoed Bass’ call in January 2023 by unanimously voting to declare homelessness an emergency.

“By focusing on efficiencies and streamlining in hiring, contracting, and procurement, we’ll be able to get many more services out there and do it much more quickly,” Cheri Todoroff, Executive Director of the L.A. County Homeless Initiative, told ABC7.

Other cities, such as Long Beach and its newly elected mayor, Rex Richardson, have also declared a state of emergency over the homeless crisis.

Declaring a state of emergency allows local jurisdictions to access greater state and federal funding to address a specific issue. The declarations come at a time when storms and flooding continue to threaten the lives of California’s unhoused.

The recent storm system, which the National Weather Service described as a “parade of cyclones,” has caused massive flooding across the state. In all, about 14 people experiencing homelessness have lost their lives because of the storms, although that number could be much higher once the storm water recedes.

The Governor’s Office of Emergency Services met with more than 400 community organizations to organize an effort to help move unhoused communities inside or to safer areas. However, many of these residents still live in dangerous areas as the state’s shelter system struggles to keep up with demand.

The pandemic proved that we need to rethink housing in the U.S. It also showed that providing additional support and protections for renters is a clear-cut way to reduce future increases in homelessness.

The Series of West Coast Storms Sends People Experiencing Homelessness Scrambling for Shelter If you’re generally tuned in to what’s happening in the world, you’ve probably heard at least a little about the powerful...

Supporting homeless artists and crafters can make a huge, positive impact on our lives. Every sale helps, for sure. It may not be possible to earn enough to secure housing, but it can help with vehicle maintenance and...

Whenever homelessness is mentioned, the phrase “mental health” is not that far behind. From media to literature, internet searches to intimate conversations, we are constantly reminded of the link between homelessness...