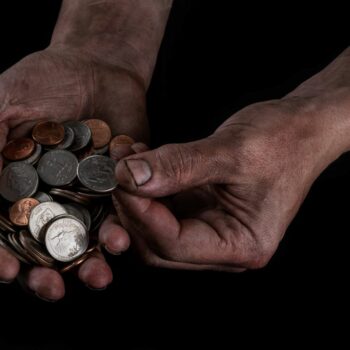 If You’re Surprised, You Haven’t Been Paying Attention

When many Americans think about unfortunate people dying in poverty, they usually picture children in a far-off land staring forlornly into the camera like in some heart-string tugging charity commercial. But in reality, the problem is a lot closer to home.

Dwindling safety nets, stagnant wages, and a lack of community resources are driving more and more Americans into a level of poverty that will claim nearly 1 million lives each year. That’s more deaths caused by capitalism than heart disease or cancer. Significantly more.

This is happening in our own backyards, or on the sidewalks in front of our houses and businesses.

Wow, That’s a Lot of People Dying in Poverty

It is a lot. It’s certainly too many. And it’s even more shocking when you consider that the total number of Americans who die each year is just over 3 million. So shocking that you might be wondering where this number comes from, and that’s totally fair.

The exact number, 874,000, comes from a Columbia University study conducted in 2011, which studied deaths between 1980 and 2007. Because of the age of the study and the worsening economic conditions we’ve been facing in the past several years, we may well have broken the 1 million mark by now.

The study found the following data for the year 2000:

The researchers refer to all these things as “social ills,” AKA byproducts of capitalism.

How Does Capitalism Kill?

Capitalism can become a factor in an individual’s death in various ways. It can be as straightforward as not being able to afford sufficient food or shelter and dying from malnutrition or exposure. Or it can be a bit more insidious.

Capitalism, or sometimes a fear of any other system but capitalism, is the cultural force that keeps Americans paying astronomical amounts for mediocre healthcare. Capitalism keeps higher education both exclusive and expensive. It also keeps people overworked, underpaid and too beaten down to organize and engage with their communities.

Capitalism is what keeps people living – and dying – in poverty. Income inequality isn’t only about income. People with the lowest incomes have an average life expectancy of six and a half years lower than those with the highest incomes. That’s before we even start discussing quality of life.

What’s Capitalism Got to Do with This?!?!

If you’re particularly fond of our current economic system, you may feel a bit defensive now. But capitalism is the engine powering the rest of the broken-down old car that got us here.

Capitalism is the context by which we decide that certain people’s lives are worth more than others. Capitalism says it’s ok for some people to live longer, more comfortable lives than others simply because their families hoarded more of our resources for themselves. Because they have more …capital.

Capitalism incentivizes growth and accumulation of wealth. That’s what a lot of people like about it. But how we see that playing out in practice is that a handful of extremely wealthy people are “incentivized” to hoard as many resources as possible – no matter the human cost. And I’m sure you’re well aware that once you have a nice little hoard beneath you, it’s much easier to keep accumulating more and more ad infinitum, leaving less and less to split between the rest of us.

Capitalism always demands more profit, which leads to cutting expenses, which leads to lowered wages and non-existent benefits. Capitalism takes workers for granted, operating off the value they produce but never valuing them enough to allow them to keep producing efficiently.

A lot of this goes unchecked for one of two reasons:

We understand it conceptually but not contextually. Just watch someone’s mind be blown when you tell them that one million seconds amounts to just under 12 days, while 1 billion seconds adds up to 31 years.

And that shouldn’t be a radical statement to make. Really it just seems like common sense. In a country where we have all the necessary resources to prevent the suffering and death caused by homelessness, but choose not to in favor of one super-rich guy taking a little joy ride to space, something needs to change drastically.

It would be great if every billionaire could reconnect with their humanity and empathize enough with their fellow humans to redistribute their wealth more equitably voluntarily. But that hasn’t happened yet, and studies suggest that it’s unlikely ever to happen. So we’ll have to help them out.

Talk to your representatives and tell them you don’t support a handful of people holding onto more wealth than they could spend even in their inflated lifetimes while your unhoused neighbors shiver on the street.

Engage with your local community to see who has a need you can fill and who might be able to fill one of yours. Talk to your coworkers about how much you make. It may be uncomfortable initially, but keeping this secret only helps your employer pay you all less than they should. Support your local politicians’ efforts toward making the essentials of daily living more affordable for all.

Capitalism has slowly but surely robbed us of our local community, living wages, affordable housing, health care, and education. Let’s do what we can to get them back.

Raymond Weatherspoon, 66, spent more than 20 years traveling across the U.S. building skyscrapers and power plants before he retired in 2016. But soon after that, his path toward stable housing took a few twists and...

The U.S. Department of Housing and Urban Development (HUD) released the Annual Homelessness Assessment Report (AHAR) Part 1 for 2022 on December 19. This report documents the number and characteristics of those...