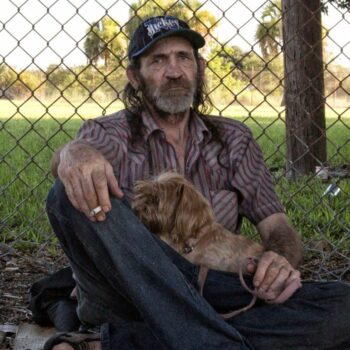 Prejudice against homeless people is at the root of so much cruelty. It’s just like any other kind of prejudice: a generalization of a bad experience into a perception or belief that applies to an entire group of people. Sometimes it’s obvious who we can blame, like certain news outlets or prominent NIMBYs. It’s easy to condemn these sources. But how do we respond to someone who personally had a bad experience, maybe even a traumatic one, with someone who was homeless?

It’s important to note, first, that homeless people don’t commit crimes as often as the media would have you believe. There’s abundant evidence that they’re in more danger from housed people than the other way around. Even so, cherry-picked examples of muggings, verbal assaults, or physical attacks are often the only times that homeless people are in the news at all.

It’s also important to note that people can be inaccurate sources. Violations of social norms are not trauma; being approached and asked for money is not harassment. It’s not a threat if they take a small step toward you while you walk past them on the sidewalk.

These examples of hypervigilance and heightened suspicion are often caused by media sensationalism. That feeling of danger may be better described as anxiety, surprise, or discomfort. When it is labeled as fear or feeling threatened, exaggerations quickly form.

Then there are people who have actually been harmed by homeless people. They might be nervous around places like encampments or shelters, and at first glance, this seems understandable.

Harm can mean anything from being catcalled to being assaulted, and it does happen. No matter our perceptions of homeless people, advocate or not, we can’t invalidate anyone’s trauma without hurting them. Hearing the sentence, “But not all homeless people are like that,” is minimizing and feels to a victim like being asked to get over it and move on.

How, then, do we validate without contributing to prejudice? We offer empathy, assistance, and support. And then we blame the attacker for their actions as a person, not as a homeless person.

Crime Has Made It Okay to Dehumanize

Whether it happens to you, someone you love, or someone you saw on the news, harm committed by a homeless person causes prejudice. It’s a knee-jerk reaction. This is because we directly attribute their behavior to their unhoused status. This is how it becomes okay to dehumanize them. Then, when we see a new story about a person being attacked by a homeless person, our confirmation bias is activated. We say, “See, it happened again,” and our resolve deepens.

For the most part, this prejudice is accepted by society. It’s socially acceptable to decide homeless people are worthy of exclusion and to treat them accordingly.

It’s an easy, almost comforting thing to falsely attribute blame — “This just goes to show we need to stay away from them.” If we leave it at that, we feel better able to protect ourselves. We cross the street, we report panhandlers and tents in city parks to the police, and we vote for policies that harm them.

Yes, there are some things that homeless people tend to have in common. Many have PTSD, which makes them anxious, reactive, and more likely to perceive your actions as threats to them. Others have mental illnesses that make you an object of fear to them—irrationally, of course, but very real to them. Still, others are desperate and hopeless, perhaps even enough to commit crimes. The same, however, could be said of anybody.

Crimes are committed every day by housed people. But their status as housed individuals doesn’t appear in the headlines.

Perhaps the reason we view all homeless people with distrust and hatred because of the actions of a few is because we’ve already decided they’re sub-human. It’s easy to connect someone’s substance abuse to homelessness instead of, for example, their childhood trauma. We could learn to view the homelessness and the substance abuse as outcomes of PTSD instead.

Likewise, we could connect someone’s criminal behavior to a lack of empathy, upbringing, or any number of other reasons people commit crimes, instead of to their homelessness. And sometimes those factors do get addressed—when they go to prison. It’s telling that in our society, prisoners—most of whom did not come from the streets but houses — have more access to therapy and recovery than homeless people.

How Do We Fight This Prejudice of Homeless People?

We need to learn to see people separate from their homelessness. We need to see them as autonomous human beings capable of making their own decisions, including about whether they are good or evil.

If we truly believe that any of us could become homeless, whether due to financial crisis, natural disaster, or any number of other reasons, then we have to acknowledge that homeless people share nothing more in common than two strangers walking past each other in a subway station.

To correct this false blame, there are a few things we can do as individuals and as a society. They include:

Good experiences and interactions will always outnumber the bad. We need to work on getting the word out that homeless people are just people. Any time you walk past an encampment and don’t get attacked is an opportunity to start to shift others’ opinions. If you can look them in the eye, have a conversation, and walk away, having helped them feel a little more human, that’s even better.

Toronto has come under fire lately, both for its homeless problem and its proposed “solution.” Currently, Canada’s most populous city serves as both a centralized hub of homelessness and a petrifying graveyard for...