Could Shopping Malls Turn the Housing Crisis Around? 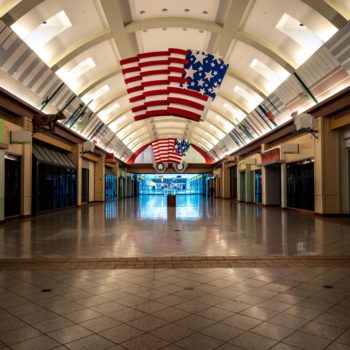 Vacant Properties Could Be Used to Reduce Homelessness

Say what you will of consumerism, few concepts have touched the modern world in quite the way of the American shopping mall. Hailed as a beacon for at least the better half of the last century, this megastore metropolis has been shaped and changed countless times over the years.

Arguably, the existence of the modern mall has also shaped and changed its patrons. Those of us old enough to remember know that Mall Madness was more than just a board game for ‘80s preteenagers. It was a way of life.

Until one day, seemingly out of the blue, it wasn’t.

This staple of American culture had been ripped away. In its place was just this digital world as limitless as a blank page and just as empty.

Overnight, shopping went from an extroverted social activity for people dressed to the nines to participate in to a solo experience that happens in the dark in your pajamas. It was almost too simple, too convenient, too lonely.

It took away the aggravation of searching exhaustively through discount racks and never finding your favorite thing but instead randomly bumping into an old acquaintance. In its place was a world with everything at your fingertips. Everyone you know is at home cybersurfing as opposed to window shopping.

There are mall enthusiasts who can’t quite let go of the past. They shake their heads at the social shift technology has thrust upon us. Then there are the tech lovers who have fervently embraced the new wave, claiming the American Mall is dead and gone. Then, of course, there is the rest of us who watch and wait as our favorite stores are shuttered, and the brick-and-mortars are boarded up.

What will become of the American shopping mall this time? Has it undergone its final renovation? Or will it morph once more, surprising shoppers and socialites with a new and unexpected spectacle?

Is the Abandoned American Shopping Mall the Key to Solving the Housing Crisis?

As more and more malls across America are left to rot, the idea that the American shopping malls’ place today is likely in a history book has taken hold. But just before the final nail was driven into brick-and-mortar retail, urban developers moved forward with an innovative proposition – using the space for housing.

In the past, it was always the allure of retail that initially drove the masses toward the mall. World Finance points out that suburbanites enjoyed the convenience of all the brand names they loved being in one place without having to venture into the city. The fact that the mall was a friendly environment, ornate in presentation, and easy on the eyes certainly didn’t hurt.

Through this lens, major department stores served as anchors, holding the communal interest with flashy billboards and overly-advertised sales.

This was the mall of the ‘80s, the image that, through pop culture, continues to prevail. But with the increased use of online shopping carts, hundreds of these flagship shops were forced to close.

We witness these store closings all around us. A Sears here, a Macy’s there, stores like Gimbles or Strawbridge & Clothier, once synonymous with earlier versions of shopping malls, are now completely extinct.

But this doesn’t necessarily mean the mall is dead, particularly if housing becomes the new anchor, waving its flag to the throngs of millennials who feel they have been cut from the housing market completely.

Many Malls Have Already Been Converted into Housing

Seattle, a city that grapples with the overlapping housing and homeless crises, recently converted the Alderwood Mall into a sleek apartment community called Avalon Alderwood. This brilliant utilization of the 64,000 square feet of space that once was home to Sears now features 328 new apartment homes with fully equipped kitchens and a robust list of amenities. Alderwood is the most famous of such developments, but it isn’t a singular project.

According to City Journal, 60 other shopping malls have since been turned into residential or commercial communities. Seventy-five new constructions of a similar vein are in the works. Making use of vacant space is an environmentally-friendly solution to housing. It also alleviates the cumbersome zoning restrictions developers face when attempting to erect completely new properties.

While the projects are promising, they’re still not perfect.

In Order to Solve the Homeless Crisis, We Can’t Just Build Housing. It Also Needs to be Affordable.

In December of 2021, the Urbanist described the Alderwood homes as being “built at market rates,” which doesn’t help the housing or homeless crisis in any capacity. The cost of housing in Seattle, WA, where the development is located, is sky-high, even compared to the national average. Incidentally, this has also reached an all-time peak.

To put things into perspective, rental rates shot up 12%-14% nationwide in the year after the pandemic. But in Seattle, that number nearly doubled. Rental rates soared 22.48% on average in this locale. Unfortunately, Avalon Alderwood’s prices are right on par with that market, which is unaffordable for most.

In closing, the American mall will never be what it once was. That’s a good thing. If developers really make use of the space and convert it into affordable housing units, perhaps they can restore the spirit of the mall in its heyday, when it was a bustling social center that brought people together through a warm ambiance and bargain prices.

If, on the other hand, developers simply convert these spaces into more luxury establishments that ordinary people cannot afford, the transition will look a lot more like what the shopping mall signifies today – an antiquated, overpriced development filled with fussy wares nobody’s buying. The choice remains up in the air for now.

The lack of affordable housing is the leading cause of homelessness. Please urge your legislators to make the shortage of affordable housing units a top priority. It doesn’t matter if they build affordable units in an old mall or a new residential area. The fact remains that they have to put them somewhere. If not, there will be no place left for average workers to reside.