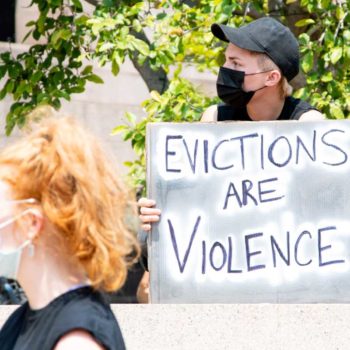 New data from The Eviction Lab at Princeton University shows the gaps in aid created when the federal eviction moratorium was lifted in August.

In all, the data estimates the moratorium prevented more than 1.55 million evictions in the six states and 31 cities that Eviction Lab tracks during the 11 months it was in effect. However, differences in local interpretation and implementation of the moratorium caused some states to provide renters with stronger protections than others.

While the number of evictions has not spiked the way some experts believed it would after the moratorium was lifted, others believe the wave may still be over the horizon.

“I think it’s too early to declare decisively that this isn’t happening,” said Peter Hepburn, a research fellow at the Eviction Lab. “This may not take the form of a sudden spike in eviction cases all at once. It may be something that’s much more delayed and diffuse.”

Even though experts disagree on the number of people at risk of eviction, many believe it is time to address issues with assistance programs and other measures designed to help people stay housed.

One program designed to keep people housed is the Emergency Rental Assistance Payment (ERAP) program created under the CARES Act and continued under the American Rescue Plan.

However, the program was mired from the start because of the federal government’s lack of guidance and the sloppy local rollout. According to the latest data from the Treasury Department, states have received more than $32.4 billion in ERAP funds through both iterations. However, the data also shows states spent an average of 32% of ERAP 1 funds compared to an average of 3% of ERAP 2 funds.

At the same time, data from Eviction Lab shows that areas that spent fewer ERAP funds have higher eviction filings.

For example, Eviction Lab has tracked more than 70,000 eviction filings in New York City. However, Treasury data shows that New York State has not reported spending any ERAP 1 funds.

Meanwhile, Eviction Lab found that cities like St. Paul, Minnesota, which spent more than 23% of its ERAP 1 funds, have considerably fewer eviction filings, with 1,472 evictions filed since March 2020.

On top of assistance programs, the ability to get vaccinated against COVID-19 is becoming a pressing issue for many low-to-no income workers as more companies require it as a condition of employment.

Eviction Lab data shows an inverse correlation between a zip code’s vaccination rate and the number of eviction filings in nine cities Eviction Lab tracks. According to a study published in Socius, these areas are also “disproportionately home to majority Black and Hispanic populations.”

The study says this correlation is significant for two reasons. First, it expresses that eviction moratorium and other policies to prevent displacement remain necessary to combat the spread of COVID-19.

According to the study, the two areas with the strongest correlation—New York City and Philadelphia—are seeing high incident rates. NYC Health reports that the city had a total of 99 cases per 100,000 residents over the last seven days. Similarly, the City of Philadelphia reported more than 1,500 cases for the week ending September 19.

In both cities, a disproportionate number of Black, Hispanic, and Latinx residents remain unvaccinated, the data shows.

Data from the Center for Disease Control shows that just 55.9% of the U.S. population is fully vaccinated.

Another issue that the Eviction Lab data brings to light is small landlords and property management companies are filing a disproportionate number of evictions in certain areas.

For example, 100 buildings are responsible for 47% of the eviction filings in Greenville, South Carolina, since March 2020 and nearly 52% of evictions filed since June 18, 2021.

Even so, the data shows that the total number of filings has been well below average since March 2020 despite there being no local eviction moratorium in the city.

Cities and states can reduce the number of people at risk of being evicted by creating diversion programs, Eviction Lab says. These programs typically provide a blend of legal representation, rental assistance, and representation.

According to a National Coalition for the Civil Right to Counsel study, only 3% of tenants are represented by an attorney when they appear in court for a housing matter. At the same time, 81% of landlords show up with legal representation.

“The information can be used to more precisely target rent relief efforts and may also help the media and community members how best to devote resources when tackling housing challenges,” Eviction Lab said in a press release.

The pandemic proved that we need to rethink housing in the U.S. It also showed that aid programs work when agencies and service organizations are provided with sufficient funds and clear guidance on spending aid dollars.

Contact your local officials and representatives. Tell them you support keeping many of the pandemic-related aid programs in place for future use. They have proven effective at keeping people housed, which is the first step to ending homelessness once and for all.