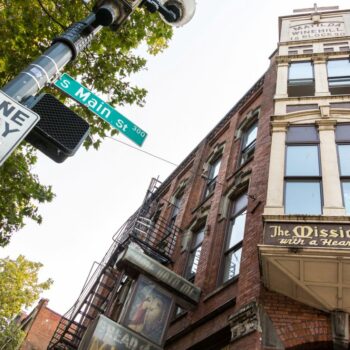 Media portrayals and the public image of homeless people are typically negative, however ill-deserved. My own homelessness was due to mental illness that was like torture. I have since recovered and now work in healthcare, supporting my aging parents, and am about to publish my first book. However, I fondly remember meeting kind, complex and caring individuals who actively contributed to society when I was homeless.

For over a year, I lived in a shelter with many other people who, with the proper support and help, could overcome their difficult circumstances and their lot in life. Homelessness can happen to anyone, but it takes cooperation from all levels of society to end it.

One lady who became a dear friend was a lawyer who had been unable to pay the rent after her elderly mother died. Despite being homeless, she was a devoted Christian and caretaker for her ill brother, always paying his phone bill and bus fare from her meager entitlements. After viewing more than thirty apartments, she eventually found a place to live and successfully got out of the shelter. She is now working again to provide a home for herself and her brother.

Another friend had served six years in the military before a family dispute left him without a place to stay. Despite this, he was a loving and devoted brother and tried to visit his sister daily to support her despite being homeless himself.

One lady in the shelter had lost her flat because it was undergoing extensive repairs; she also had a mental illness. She helped me adjust some of the (too big) clothes I was wearing to fit me better.

Another indigenous lady gave me a bag of unwanted clothing during COVID when all the stores were shut, and clothes were impossible to get. She was a grandmother in her 70s who had been a victim of severe domestic abuse. After raising four children and caring for countless grandchildren, she could not find a place to live because of her age and insufficient funds. She told many stories of traditional lifeways, including hunting and eating gathered foods as part of her childhood with her large indigenous family.

The shelter housed many refugees who fled wars and violence in their home country.

These people tried to give back to their adopted country by finding work or undertaking night classes in nursing. The jobs they could find were usually menial and poorly paid. But they worked willingly to try to better their situation.

Sometimes these ladies supported children or families back home. Unfortunately, they had to leave their children behind with relatives to create a better life for the whole family. Children could rejoin their parent once they found a stable job and could provide support in a new country.

Some of the people in the shelter were disabled and in wheelchairs or elderly.

Some could not walk without a walking frame or had been evicted from a nursing home. One elderly migrant lady had been kicked out of her daughter-in-law’s house after her son died. The only other family she had was spread across the globe. She had no money or visa to live with them. She cried whenever she talked about her dead son but actively supported her children who lived in other countries.

One man used drugs but had run a successful business as a painter before his life spiraled out of control. He was a caring and supportive friend to those around him and often gave drinks from his meager supplies. (He panhandled to survive as he had no income to support himself.) Many famous figures have written or spoken about their drug use. I believe that as a society, we should see and support the individual behind the choices.

These are just some of the people I met while homeless and are typical of many homeless people. All these people are worthy members of society. They deserve our help and support, as does every single person in and out of a shelter. As a society, we can and should help and support the most vulnerable and recognize their valuable contribution to society.

As a service provider, my lived experience of homelessness aids my ability to connect with the people I serve. It also makes it impossible for me to ignore when narratives about homelessness contradict those experiences...

Homeless Veterans Are Still Vastly Overrepresented in Canada and Elsewhere “Lonely, desolate, and out of touch with the world.” Those were the words 50-year-old Canadian war veteran Darryl used to describe his current...