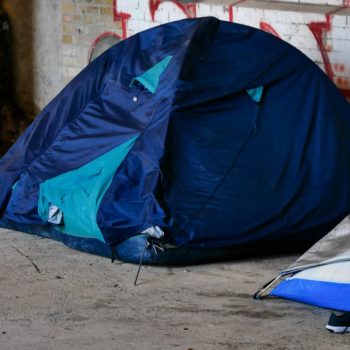 Deceptive Bill Is Anti-Homeless Legislation That Will Not Reduce Homelessness

The “Reducing Street Homelessness Act” is a highly deceptive bill currently making its way through the Georgia Senate. If passed, this legislative nightmare could go into effect as early as the summer of 2023.

As you might have guessed, the proposed bill is not aimed at reducing homelessness. It would be more aptly titled the “Criminalizing Homelessness and Slashing All Potential Long-term Housing Solutions Act” if it was held to the same advertising standards as a bowl of cereal.

Here’s a look at the deceptive anti-homeless legislation and how legislators are presenting it to the public.

What is the Reducing Street Homelessness Act?

While the title might seem simple at surface level, a keen eye can immediately spot the discrepancy. The interjected word “street” plays an operative role in the bill’s true meaning. As many are aware, street homelessness is only one of many kinds of homelessness. Notedly, it is the most visible form.

In most cases, a person experiencing street homelessness is sleeping outside in a place unfit for human habitation, like a sidewalk or an alleyway.

Street homelessness opens people’s eyes to the harsh reality of how our fellow human beings are treated. It invokes a great deal of sympathy and awareness, forcing people to face relatively uncomfortable truths about the housing and homeless crisis. By fighting to reduce street homelessness, this bill is trying to make homelessness less visible, less uncomfortable.

It is not trying to make homelessness less. This is the most important point to bear in mind moving forward.

Additionally, some of the most extreme examples of anti-homeless legislation are built right into this bill, a brazen move that could have dire consequences. While criminalizing homelessness is on the rise in just about every state in the nation right now, this controversial law would take things one step further, making attempts to shelter on state property a criminal misdemeanor.

In an even further push toward criminalization, the bill mandates the presence of law enforcement officials when removing members of the homeless population from encampments and makeshift outdoor shelters.

An optimist might look at this bill and see it as a sham attempt to bring rough sleepers inside by any means. But in truth, it is about pushing more people outside by thrusting them into homelessness through poverty and stripping funds.

Ultimately, what this bill seeks to do is to remove any possible prospects of permanent housing by banning the use of federal funding for the purpose of constructing permanent homes.

It further prohibits using any funding provided by the American Rescue Plan for constructing affordable housing. This ban puts the state’s housing voucher program at risk, potentially forcing thousands of vulnerable new people into the desolate state of homelessness from their current positions in government-funded and low-income housing units.

And from there, where will they go? The nonprofit “advocacy” organization Cicero Action, which is currently pushing the bill, suggests jail as the most viable alternative.

In a telling interview published by the GPB News team, Cicero spokesperson Judge Glock made the following detestable statement:

“They should focus on short-term, service-provided shelters for people who are in crisis and not try to give every individual on the streets a free and indefinite home because that will not solve homelessness.”

Contrary to What This Judge Says, Statistics Prove that Free and Indefinite Homes do Solve Homelessness While Criminalization Perpetuates It

Statistics are not on Judge Glock’s side. Giving homeless people homes continues to be the most cost-effective and sufficient approach to ending homelessness.

According to Business Insider, the most recent, most expansive study ever conducted on American homelessness revealed that the cheapest and most straightforward solution to the crisis is, in fact, giving people homes. Criminalization is at least three times more expensive than giving people free and permanent homes.

With a bill that expressly forbids using government funding to construct affordable homes and a crisis that puts the U.S. at a deficit of more than 7 million affordable housing units, the only thing that can be gained from the “Reducing Street Homelessness Act” is an overcrowded prison population, thousands of new people forced onto the streets, and a strong suit of power for the political elite.

Bill and Ballot Titles Can be Deceptive and Damaging

There are myriad ways that government forces conspire to deceive. From playing favorites in the media and misleading voters to spinning half-truths and spewing flat-out lies, deception sits at the heart of most political corruption. One of the least noticed and most used tactics of deception is in the names and titles associated with major movements and pieces of legislation.

It is not uncommon for a campaign or law that works against a particular group’s interest to be introduced under a name that suggests just the opposite. The most notorious example of this is likely “The War on Drugs,” which propagated mass incarceration and increased drug-related violence globally. The one thing it didn’t do was eliminate or even reduce drug use.

To add some perspective to this, U.S. drug-related deaths have risen more than 600% since the 1980s, when the so-called “War on Drugs” was at its peak.

Equally unsettling was “The War on Terror,” which could have been more accurately titled a “War of Terror.” This 20-year bout of armed conflict claimed over 900,000 lives, more than a third of whom were innocent civilians, which equates to 363,000 human souls, taken under a title that suggests peace.

On a smaller scale, national legislation pulls this same scandalous trick with titles. When legislators introduced the “No Child Left Behind Act” they claimed it would enhance childhood education. What it really did was strip impoverished school districts of the necessary funding needed to build a brighter future. We are left with what Stanford writer Linda Darling-Hammond called “the most inequitable education system in the industrialized world.” She further explains that the bill attempts to optimize student achievement “through threats and sanctions rather than the serious investments in education and welfare such an effort truly requires.”

HuffPost points out that bill and campaign titles are so deceptive they would likely not pass the rigorous guidelines imposed on other types of advertisements. In other words, it’s more difficult to lie about the fat and sodium content in a popular brand of cereal than it is to trick voters about the contents of a bill you’re representing.

Oppose the “Reducing Street Homelessness Act Today. Talk to Your Legislators About the Recent Uptick in Homeless Criminalization.

While it might seem tedious to read the fine print, this bill and others like it show how politicians are willing to play on the public’s sympathetic side and present deceptively titled bills, bans, and laws.

Please contact your legislators and urge them to remove legislation that criminalizes homelessness, no matter how craftily titled. Replace those laws with ones that make housing a human right. After all, if we don’t use the funds provided by the American Rescue Plan to rescue Americans, we might as well add that title to the elongated list of deceptively named policies.

I’ve always said that the human capacity for cruelty is staggering. Here is a story that shouldn’t have shocked me, but I was surprised by it anyway. It’s a simple thing that illustrates a significant point. Recently...