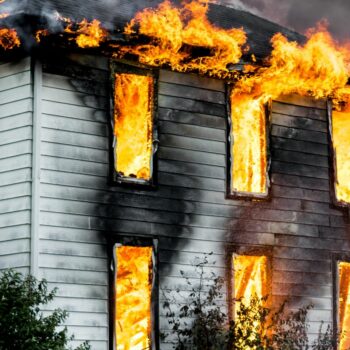 “Setting fires in residential buildings while occupants are sleeping is a truly despicable crime. These fires endangered the lives of the innocent residents and the Firefighters who bravely responded to save them.”

When a heinous string of arsons struck New York, the motive turned out to be quite chilling. The series of events consisted of five separate fires meant to target at least three separate properties, and these fires were lit while the residents inside them lay sleeping.

Targeted residential buildings were located in three different regions – one in East Flatbush, another in Boerum Hill, and a third residence, a single-family home in Albertson.

While the fires did not result in any human lives lost, they were intentionally set ablaze in the dark of night while residents were presumably sleeping. The family in Albertson, NY, awoke in horror as their multiple pets were “burned alive” and their worldly possessions perished. Reports from the U.S. Department of Justice suggest that they narrowly escaped with their lives. Damages ensued at all three locations.

The Burning Truth was More Sinister than Investigators Initially Suspected

This case initially perplexed investigators from the New York City Arson Explosives Task Force, a unit comprised of several federal, state, and local law enforcement agencies, not to mention teams of task force officers and special agents. The original suspect was co-conspirator Curtis Williams, who tasked an unnamed individual with setting the buildings aflame. The question was, what motive did Williams have in destroying these residential properties?

The case became clearer when the original arsonist turned on his cronies and revealed the underlying dirty truth. Real estate developer Daniel Melamed had paid Williams to light the fires, a task Williams passed onto another criminal arsonist. Once the smoke cleared, it was evident that Melamed intended to terrorize his residents out of the properties so he could flip them and make massive amounts of money.

As It Turns Out, Their Landlord Wanted the Smoke, Literally

While several animals were murdered in the most horrific way imaginable, and multiple renters were left with unthinkable emotional and property damage, Daniel Melamed held firm that he never wanted fires. He just wanted smoke.

According to his testimony, which we should take with a grain of salt given his despicable actions, he requested the arsonists “create a small smoke condition” that would essentially drive residents out of the buildings, seemingly of their own accord.

While he may not have intended to kill anyone with his hellish scheme, Assistant U.S. Attorney Thomas Wright notes that he did wish to terrify his tenants and fill their minds with the fear that they would wake up again in a burning building.

Imagine how maniacal a person has to be to want to instill that kind of petrifying, life-altering fear. Imagine how absolutely awful things might have gotten if he did succeed. Isn’t the human mind worth at least as much as the body? Isn’t robbing a person of their peace or sanity akin to taking their life?

After Not Being Immediately Imprisoned, the Evil Landlord Continued to Plot and Plan

Between 2011 and 2021, the year of his most recent arrest, Daniel Melamed was arrested and accused of multiple transgressions against his tenants. By 2015, he had over 300 complaints filed against him and was arrested for depriving tenants of heat and hot water for months, not to mention exposing a 6-year-old to toxic levels of lead dust.

From hazardous renovations to shifty shell company operations, Melamed continued growing his empire on the backs of New York City’s poorest residents. But while the New York Post called him a “notorious slumlord,” Yahoo! News dubbed him a “successful entrepreneur” and praised his portfolio of projects built on lies. Conflicting narratives fed the machine, and Melamed continued on his rampage.

Knowing full well the level of destruction and terror he ignited, and with suspicions that the cops were on the trail, Melamed did an unexpected thing, a noteworthy action, in response. He started planning more fires.

Investigators on the case report having video evidence of Melamed engaging with Williams, sparking conversations about lighting even more fires to illegally vacate even more buildings and satiate his unending thirst for flipping properties at the expense of the renters inside them. During these conversations, he used the word milk in place of fire. He suggested that Williams “pour milk” over properties, which was code for starting fires or illegally severing utility lines.

This evidence was used against Melamed, who, in 2021, nearly ten years after the disturbing events, was sentenced to five years in prison and forced to pay $500,000 in fines for his heinous crimes.

However, it bears reflecting on the fact that he felt so comfortable, so untouchable because of his position in real estate development, that he continued this behavior for almost a decade. How many more corrupt landlords like him run free?

This Story is an example of a Self-Help Eviction Spree, A Crime Spree Though You Won’t Hear It Called That in the Press

While a very extreme example, these attempts to terrorize or even harm renters and persuade them to leave properties voluntarily is known as a self-help eviction. These tactics are technically illegal in most states, but landlords still use them as a last resort. Other, more common examples of self-help evictions include:

Talk to Your Legislators About Protecting Renters Through Better Legislation

Corrupt landlords attempt to operate outside the law because current legislation makes them feel like they are above the law. If the idea of landlords setting buildings on fire with residents inside makes you uncomfortable, consider this:

The legal system is so aloof in its attitude toward self-help evictions that nobody in government even bothers to track them.

When evictions are legally filed, an occurrence that happens a jaw-dropping 3.6 million times a year, the court system overwhelmingly leans in favor of the landlord because this is the direction of the law. Now is the best time to talk to your policymakers about drafting laws that protect renters from unjust evictions and subsequent homelessness.

Advocates and nonprofits in Tucson, Arizona, are raising $1.4 million to operate a tiny home village for the region’s unhoused as federal data shows the number of people sleeping outside continues to grow. The Homing...

We’re far enough into the new Congress to be able to answer most of the remaining questions left open in my November 30 post. So let’s talk about how Congress will be different in the coming two years, and how our...

The Answer May Surprise You If you were to ask the average person what the most common type of homelessness was, they’d first probably wonder aloud what the different types of homelessness were. But after you explained...