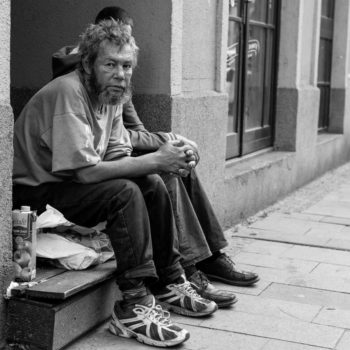 For the most part, homeless people today have been priced out of housing for various reasons. While a certain percentage may be homeless due to substance abuse, the vast majority are not drug or alcohol users.

Homeless people in 2021 are elderly individuals, people with children, disabled people, and still employed people who don’t earn enough to afford housing. Today, homeless people live in their vehicles, when possible, or perhaps a tent somewhere. Some find creative solutions for setting up camp.

The disheveled individual holding a bottle in a brown paper bag is no longer the face of the unhoused community. Yet, so many people cling to this image so they can remain justified in clinging to their hate and disgust of homeless people. To realize homeless people are elders, disabled, and families who can’t earn enough to afford housing would force them to face their ignorance and reevaluate what they have clung to for all these years. If there’s one thing I’ve found ignorant people hate, it is being proven wrong or forced to change their perspective.

So long as people can say, “They want to live like that” or “They are paying for their bad choices,” then they can sleep soundly each night as people suffer.

Apparently, as long as you caused your suffering, it’s okay not to withhold compassion from you. Of course, by that reasoning, if a smoker gets lung cancer or emphysema, it’s not necessary to show them compassion because they caused their suffering, right?

Of course, those who lack compassion have little sympathy for anyone, regardless of their cause of suffering. These people seem to be everywhere because they are the most vocal. They are hateful people who go out of their way to be cruel. It must fill some need they have because so many of them do it in earnest, in my experience.

Here is an example:

A Facebook user took the time to write out a long essay in the comment section under my last column about begging. It perfectly illustrates what I am writing about (pasted here with all his grammar and spelling errors):

“Begging means you are worthless. Too worthless to even take care of yourself with your own effort so you must proposition others with your patheticness to move them to financial pity giving. If you spend as much effort looking for a job or availing yourself of the many health services NYC has maybe you wouldnt have to be. And what “expenses” does a homeless person have? They can easily get GR and Foodstamps, so that they can get food and basic supplies. So really begging is just dope money, or money to continue the fuck-off no responsibility life style they find themselves in. And that’s why even after a decade homeless, I don’t give em a penny. I know what it’s for. Suffer for your bad choices, I won’t save you from them.”

Now let me also point out that his profile photo was of a cartoon of Peter Pan smoking crack. The account was tightly locked up, so you couldn’t learn any information from the account, including his actual location, age, etc.

While it’s undoubtedly true that everyone has a right to their opinion, this is a case of someone using their opinion as factual information. That makes him dangerous.

According to his reasoning, all homeless people are in this situation due to addiction. Yet, I have never experienced being drunk. I don’t consume alcohol in any form, use drugs, or even take prescription medications. Yet he proclaims that I am in my situation because I am a drug user?

He also seems to think that social services gives people enough to live on and asks what “expenses” a homeless person has, which shows he never read the article. For homeless people living in a car or van, the expenses are many.

So armed with nothing but ignorance and poor spelling and grammar, this hateful troll spews ignorance instead of enlightenment. For this reason, I stay away from most social media. I don’t use Facebook, as I find it invasive, and the worst trolls have the most significant stage there. It was a follower who brought this to my attention.

An article on Invisible People points out that 74% of all homeless today are not people suffering from addiction. That means only one-quarter of homeless people fall into this troll’s category.

As I said before, modern homeless people are priced out of the housing market because they do not have an adequate income. Mr. Troll calls all disabled and older people dope addicts – as if he knows each of their stories.

The fact that anyone would take precious time from their life to sit and write what he did is staggering to me. I will never understand troll psychology. But people who need to step on others while they’re down are in deep need of help.

My friend calls that, “Big me, little you.”

They should be pitied, not only for their ignorance but for whatever conditions caused them to become bullies. Meanwhile, when hateful trolls spew this sort of rhetoric, it perpetuates negative stereotypes and strengthens the walls that must come down so we can solve homelessness.

In that one paragraph, dear Mr. Troll has single-handedly illustrated so many of my past columns, including the one I did for Christmas about Scrooge. Like Scrooge, this troll also believes that it can only be your failing with substance abuse and laziness if you’re homeless.

I’m sure Charles Dickens would be sad to know that man is no more enlightened now than when he wrote “A Christmas Carol” 177 years ago!