Homeless During the Holidays – Invisible People 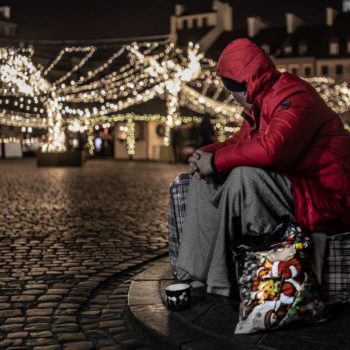 Christmas was fascinating for me when I was a young child. It was magical. As I grew up, big family gatherings at a relative’s house were common during the holidays. It was a special, happy time.

I have a very large family. My grandmother has over a dozen siblings, and many of them had many kids themselves. I had dozens of relatives – many aunts, uncles, first, second, third, and fourth cousins. We all gathered for birthdays, graduation parties, Easter, Thanksgiving, Christmas, and New Year’s every year.

On Christmas morning, I’d wake up to a fully loaded Christmas tree, stockings, hugs, kisses, cookies, hot cocoa, and pancakes. Christmas wrapping paper scattered all over the floor, we got in the car and made our way to a relative’s house to do it all over again with extended family.

I suppose it hasn’t really felt the same in many years.

When I was homeless, the holidays were just about the most dreadful time of year. I knew, then, it could certainly be worse. That first winter, I was staying at a crowded shelter. I remember the mood was the equivalent of a deep sigh. Perhaps it was hard to avoid thinking about all the families who were spending Christmas together, in their homes. Or my homeless friends who were on their way to see their families that Christmas morning. I often wonder how that felt for them.

At the time, I was staying at Parkview, a homeless shelter located directly across the street from the Harlem entrance of Central Park. Sometimes they’d have events in front of the Harlem Meer, and I’d watch as families gathered to look at the lights. I spent many snowy days sitting on a bench in my coat, staring out at the water.

While I can’t really explain it, it hurts to think about it now.

I don’t know what about it exactly hurts. Maybe it’s the fact that I’ve never really been able to move on from that feeling. The light dimmed. The magic, exhausted. It just feels different now.

I have a pair of snow boots sitting next to my front door. Lately, I haven’t had much need to wear them – since we’ve been mostly staying indoors, social distancing, for quite some time now. But those boots have sentimental value, linked to that very winter, many years ago.

Ice and snow gathered in front of the homeless shelter, and it was quite difficult walking around outside. At the time, I relied heavily on the quiet, solace provided by the calm waters of the Meer. But making way to that bench, and really, anywhere, was hard without the proper footwear.

A stranger on the internet sent me those boots. I still have his gift receipt in a shoebox next to my bed. I think, in a way, that pair of shoe boots, that gift receipt, which says, “I really hope things get better for you soon, Jocelyn,” is the most profound and most accurate representation of what the holidays mean to me today. It’s grace for your fellow human beings. It’s becoming a force of change, real tangible change.

I’ve tried to find ways to honor this truth, this memory, and let it be captured in feelings of hope, in togetherness, in, perhaps, the spirit of solidarity, as difficult as it truly is. I wait for it to light the fire in my belly.

These days a lot of it is about trying to be what I needed when I was homeless. And, I suppose that was really just a friend and a listening ear.

Then listen intently and patiently for their answer. Just being heard, just being seen, makes a world of difference. We’re called “Invisible People” for a reason. Homeless people aren’t heard (or seen) enough.

He said, “I’ve been there before.”

Thinking about it now, it’s pretty heartbreaking. He said, “It won’t last forever.” He said, “I hope you’ll stick around.”

I messaged him from the park bench, in the snow, smiling at my screen, not feeling so alone anymore. He was not the only one. Allies walked forward and smiled, holding out their hand. Homelessness taught me fierce solidarity from unexpecting comrades. It taught me about love for our fellow man all over again.

I think for many, the holidays are a time to give, to give to those less fortunate, and to give back. In truth, I wish this way of thinking was not only reserved for Christmas.

The best time to donate to a homeless shelter is today. We don’t have to wait for the holidays. I would love to see us move away from charity and toward ally-ship and solidarity.

Homeless people are just people without houses. They are human, with a story, like all of us, and deserving of compassion, of support, like all of us.

Christmas has never been the same, but maybe it’s worth embracing what it has become.