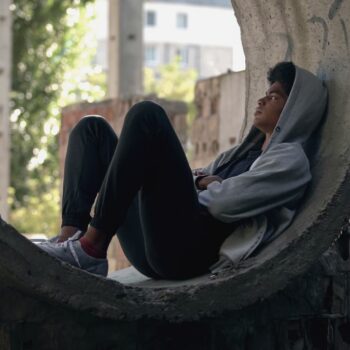 Youth homelessness is a growing problem across the United States of America and one that has gone too long overlooked.

In 2017, Chaplin Hall at the University of Chicago presented one of just a handful of research papers attempting to quantify youth homelessness. The paper, titled “Missed Opportunities: Youth Homelessness in America,” concluded that a staggering 1 in 10 American youths had experienced some variation of homelessness. That number equates to 3.5 million individuals aged 18-25. For school-aged children, the statistic was 1 out of 30, which equals 2.5 million more.

Unlike older unhoused people, homeless youths are often hidden. They are the couch suffers, the rooftop chasers, the kids who spend the whole night at the club – not because they really want to party, but because they simply have no place safe to go.

“I try to sleep on rooftops,” explained one 18-year-old interviewee who opened up about his homelessness.

In an interview with LAist, she solemnly stated:

“There has never been a period of time where we’ve experienced just more tragedy of young lives lost.”

A Testament To A Troubling Trend

Unhoused service providers in the LA area are experiencing burnout and leaving their jobs in droves. Underpaid and exhausted, the harsh reality of youth death is also taking a toll on them. They used to have to check the sheriff’s website when a homeless youth went missing. Now, they’re more likely to see those names on the coroners’ website.

The current service system caters to unhoused people based on their perceived level of need. As such, homeless youths have fewer resources available to them because they are deemed less needy than people from older generations.

Beneath the surface, while few experts like to admit it, they are also perceived as more criminal than people hailing from older generations. This fact presents itself repeatedly in studies and statistics:

According to the Community Mental Health Journal’s piece “Explaining Homeless Youths’ Criminal Justice Interactions: Childhood Trauma or Surviving Life on the Streets?” young people who run away from abusive homes are twice as likely to be arrested and imprisoned. Due partly to their need for obscurity, homeless youth spend most of their time simply trying to survive without being noticed.

When interviewed, several LA-based unaccompanied teenagers explained that they spent most of their time trying to eat and avoid life-threatening situations. This was already the case in Los Angeles and other parts of the nation. But then the pandemic hit, and we bore witness to the consequences of ignoring our youth.

In the two years since the pandemic, homeless deaths have skyrocketed, especially in LA, extending through all age groups. However, the latest data shows that homeless youths between 13 and 24 are being hit hardest by this phenomenon. Their deaths have doubled across the county.

To give you a better grasp of the situation, homeless deaths overall rose by an astounding 56%, going from 1,271 to 1,988. Among young people, they rose by 106%, yet another instance of doubling.

Homeless Youths Lack Resources Even Outside of the Social Services Sector

It is undoubtedly true that social services provided fewer resources to younger people experiencing homelessness during the pandemic. Instead, they honed in on elderly homeless individuals deemed more vulnerable to the virus. This had a devastating impact on unaccompanied young people who still needed access to things like healthcare and housing. But that’s not the whole problem.

Even beyond the social services sector, homeless youths, in general, have fewer resources. Many of these teens are not hidden, so much as they are hiding – hiding from police and truancy officers, hiding from abusive family members, hiding from the shame and stigma of being young and homeless, a title they likely refuse to wear because it is limiting, not to mention heartbreaking.

These young people are on the edge of adulthood and deserve to ponder the future ahead of them with a sense of optimism. Yet, even the small joy of independence is taken from them before they get the chance to experience it.

Here’s an example to give perspective:

Getting a job while homeless is an incredibly difficult task. You probably lack a valid address. You might not have credentials or identification. Your credit could have taken a hit from whatever catastrophe landed you into the pitfalls of homelessness to begin with.

Still, entering the workforce might not be impossible. Unless, of course, you’re 16, truant, scared, and on the run. In this instance, filling out a job application puts you at risk of being detained or hauled off to the nearest juvenile detention center or returned to a broken or abusive home.

Even if you already have a job, obtaining housing is equally impossible.

While you might have the money for a small studio apartment, but you’re still not old enough to sign for one. You probably don’t have the credit or rental history. You might not even have a driver’s license yet. This holds for most hotels, meaning you can’t even rent a room without these credentials.

The only places available to homeless youth are run-down motels operating outside of the confines of the law. These places are usually overrun by crime and prostitution, making the rooftops seem safer by comparison. In reality, those rooftops cannot save them. Only better policies can do that.

The coming generation faces challenges and obstacles nobody has seen – from climate change and mass school shootings to an encroaching automated and dystopian atmosphere.

They are already battling suicide and depression at unprecedented rates. They shouldn’t also have to die homeless on the streets of our cities.

Please talk to your local legislators about preventing youth homelessness and the fatalities it causes.