Homelessness Among Native American Veterans is Under-Researched and Under-Reported 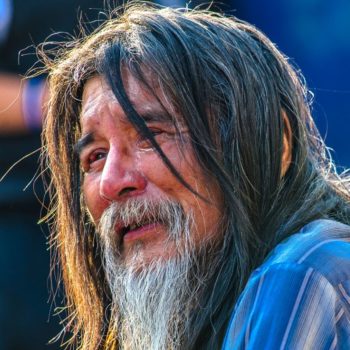 Homeless American war veterans are one of the most stereotyped and least understood marginalized groups.

When depicted as brave soldiers who’ve fallen upon hard times, the media scrutinizes them. When depicted as disabled victims cast aside by the very society they fought to protect, the community scoffs at the sacrifice. And when they are cast in stories that show their humanity, the general public prefers to hear about PTSD, addiction, and mental health issues.

Yet, when their traumatic stories are brought to life, the populace smacks with dissatisfaction.

Indeed, it does seem that the most acceptable stance on veteran homelessness is not acknowledging its existence in the first place. This is a lot to ask of us, to turn a blind eye to the multitude of roadside encampments where patriotic flags flap haphazardly in the wind.

When veterans account for such a large percentage of the entire homeless population and their physical and emotional war scars are visibly displayed on city sidewalks, the situation is something most Americans can’t unsee.

The outrage of witnesses often sparks veteran homeless campaigns. Visibility is something that can change perception and even influence policy. But just because a specific group of homeless people has become more visible to the general public does not mean that group is clearly understood.

Indeed, within the homeless veteran community, there exist subgroups of individuals who are barely recognized. This is the unfortunate truth for homeless American veterans hailing from Indigenous ethnic backgrounds.

It’s Especially Difficult to Raise Awareness of Indigenous Veteran Homelessness Because There’s Almost No Data Available on the Subject.

You can’t find what you’re not looking for, which is part of the reason Indigenous homelessness is such an enduring problem nationwide.

According to Bloomberg CityLab, detailed data on Native American homelessness is seriously lacking across the board. Reasons for this range from cultural barriers with non-Native outreach workers to the intentional erasure of Indigenous cultures and traditions.

What we see today is the end result of a 500-year plight, a failed attempt to destroy an entire nation.

Tragically, the short answer for why we know so little about Native American homelessness is genocide and abject generational poverty. Separation also plays a significant role, with an estimated 78% of tribal people dwelling in urban areas away from reservations.

Now, as all of America faces the turmoil of a homeless crisis, Native American homelessness is finally getting some attention. But the problem is that even well-intended reporters who wish to raise awareness cannot because centuries of data are missing.

The Journal of Military and Veterans’ Health is a peer-reviewed publication focused on studying the after-effects of the military environment. This publication deals with a wide range of issues related to veterans’ health, publishing education and research supported by the Australian Military Medicine Association.

Published in January of 2019, the aforementioned review of reviews appeared in the first issue of Volume 27. In order to assess the needs and unique obstacles of homeless veterans from Indigenous backgrounds, a collaborative crew of researchers analyzed electronic files from reputable online databases, seeking statistics that dealt solely with this marginalized subset of individuals.

Some of the databases researchers examined include:

These testers carefully searched each website, scanning for keywords related to Indigenous Peoples, homelessness, and veteran status. Some of the search words they were on the lookout for included:

The original search yielded disappointing results, with only 32 research papers written over several decades that even included the keywords at all. Further scrutiny revealed that only one paper from the 32 pieces of literature qualified as dealing directly with homeless Indigenous war veterans. Even more tragically, the paper is 25 years old, written in 1998.

Authors of this review, titled “Homeless Indigenous Veterans and the Current Gaps in Knowledge: The State of the Literature,” quickly deemed the research on this subject matter inadequate, pointing out that this lack of statistics is an international issue, pertaining not just to the United States, but also Canada, Australia, and much of Europe.

These Results Are Shocking

In the context of this literature, understudied is an understatement, to say the least. Sometimes, when you want to know the sentiments of a people, you look not to the things they say but to the words they leave unspoken. This is one of those instances. The lack of data on this issue speaks volumes about its priority level.

It’s important to note that the one lone study on homeless Indigenous Veterans did not highlight causal factors whatsoever. It was a study on alcohol and substance abuse within the Indigenous homeless veteran community. Here it is clear that we are not looking for answers to solve the problem. We are looking for excuses to place the blame.

Without research, we cannot identify the causes of homelessness, let alone solutions. When it comes to Indigenous homelessness, military and otherwise, it is beginning to look like that’s the point.

Contact Your Legislators About the Veteran Homeless Crisis Today

People who shed blood under the banner of protecting their nation should never be without a home. Contact your legislators and ask them how they plan to fill these information gaps on veteran homelessness. With war a constant, imminent threat, who will fight for a country that won’t even provide them with a place to live if they manage to survive in the trenches?