Homelessness and Poverty Take a Toll on Teens 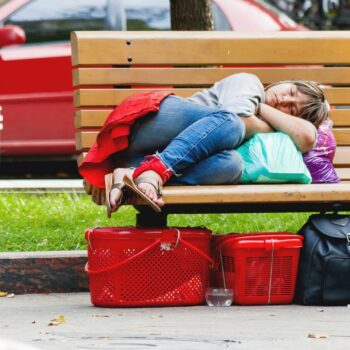 Families with Children Are Often Overlooked When We Think About Homelessness

Millions of school-aged children are juggling the demands of schoolwork, friendships, after-school activities, and preparing for their future as fully-fledged adults – all with the added pressure of not having a secure, permanent place to call home or enough food to go around.

The teenage years are difficult enough on their own. The additional layer of poverty or homelessness can make them all but unbearable. Tragically, many of these struggling teens fall through the cracks, repeatedly unable to connect with the services that could help their families out of their situation. Many even mortgage their futures to support parents and younger siblings, relying on them for survival.

That’s a lot of pressure to put on any teenager. And it certainly takes its toll.

They’re Not Bad Kids, But They’re Often Judged that Way

Being a teenager is difficult at the best of times. The added stressors of poverty and homelessness can amplify that all the more. This sometimes results in acting out, skipping school, or other behaviors that a teacher without full knowledge of the situation may deem as unacceptable.

This can lead to unhoused teens being punished at school more often than their stably housed counterparts, a phenomenon that’s amplified for Black teens and other teens of color who already face this bias no matter what their socioeconomic class. Things as simple as missing a few days of school due to a lack of transportation from your shelter can spiral into bad grades, suspensions, and being deemed a troublemaker. Once you’re labeled as a “bad kid,” it’s incredibly difficult to break out of that mold, and you’ll receive less grace and be punished more harshly than other students.

With increasing class sizes and pressure to produce high test scores, teachers often lack the time and bandwidth to check in with students individually to see what’s going on in their personal lives that could be the root cause of poor performance in school.

In lieu of this compassionate check-in, issues are usually either ignored, passed on to administration, or punished as a matter of course. As time goes on, these little issues snowball, the punishments become harsher, and school becomes more trouble than it’s worth for teens who are already facing so much adversity.

In the end, only 64% of homeless students graduate from high school.

Studies have shown that teenagers who have lived in poverty experience higher levels of stress than their economically secure peers. This effect reached beyond just the years in which the person was experiencing poverty, in some cases even lasting long after their financial circumstances improved.

It’s difficult to quantify precisely what effect this increase in stress will have in a person’s lifetime. Still, plenty of research suggests that stress contributes to many health issues and can lower a person’s quality of life. It’s certainly not a strong foundation for these teens to try and build their future lives upon.

Teenage Children Often Sacrifice for the Sake of Younger Siblings

A survey of families dealing with food insecurity in cities across America found that teenage children go without food twice as often as their younger siblings. It’s common for parents to skip meals in favor of feeding their children when times are tough. But if the food still won’t stretch, younger children will be fed first while older kids, particularly teenage boys, will be left to fend for themselves. Overall, 5.6% of children under age five aren’t getting enough to eat, while 10% of teenage girls and 14% of teenage boys are going hungry.

In addition to skipping meals so that younger siblings can eat, teenagers living in poverty are working an alarming number of hours. Even part-time jobs that demand 20 hours a week of a teenager’s time can be difficult to manage without losing sleep, missing school, or risking overwhelm and health problems.

Though these things can profoundly affect a teen’s future, the immediate ramifications of not working can feel even more dire. Families living in poverty often depend on the income older children can contribute to the household for basic living essentials like making rent or putting enough food on the table. Sometimes even that isn’t enough.

Many adverse outcomes can follow poverty-stricken teens into their adult lives, but that’s assuming they make it that far. Unfortunately, the stress of living in poverty and being homeless as a teenager can exacerbate mental health crises and cost teens their lives.

Bryce Gowdy was one such teenager. The high school football star was 17 years old and just months away from starting classes at Georgia Tech on a scholarship when he died by suicide.

His family had re-entered homelessness shortly before his death, though most people in his life didn’t know the full extent of what he was dealing with. You would never know just by meeting him in passing or scrolling through his social media accounts, which were filled with the usual highlights of a teenage athlete.

From the outside, it might seem like Bryce had everything to look forward to. He had graduated high school a semester early and was on track to start college and blossom into adulthood. Unfortunately, the drawbacks of his situation overwhelmed the positive in his mind. He lacked access to the mental health resources that could have helped him and the social programs that could have alleviated some of his day-to-day turmoil.

Sadder still, he is one of many Black teenagers dealing with suicidal thoughts. In fact, there’s been a 73% increase in suicide attempts among Black teenagers from 1991 to 2017.

We need to do a better job of protecting these vulnerable teenagers. Making sure all people have access to the necessities of daily life, like food, housing, and health care, would make a huge difference.

Seniors are already predisposed to poverty for many reasons. Financial anxiety has not always been rampant among seniors. But now that it is, more seniors are finding themselves homeless. Fixed incomes are...

Every year, the Administration on Community Living (ACL) releases its 2021 Profile of Older Americans report, which outlines the demographics of older adults throughout the United States. Among the findings are several...

Predictive search is a relatively new concept in comparison to other linguistic forms. Emblematic of the internet age, this crafty feature that allows search engines to prompt you with the phrase you’re thinking up next...