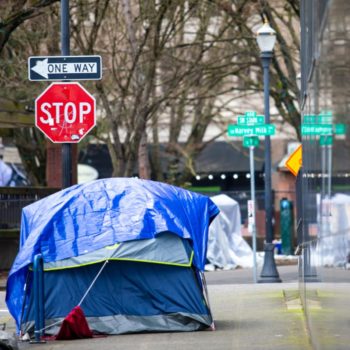 In early March of this year, a loved one shared PragerU’s latest documentary on homelessness. Titled Homelessness: The Reality and the Solution, this 23-minute Youtube video, or “documentary,” has almost 2 million views.

At first glance, like me, you’d probably think, “Oh, this looks like a credible documentary provided by an accredited university!” Not only that, but it looks professionally done. It has millions of views and over 2,000 likes – so it must be a good resource on homelessness!

Honestly, this is what I thought before watching this documentary. Once I started the video, I was utterly baffled by the misrepresentation.

First Things First, Who Is PragerU?

According to their official website, they’re a non-profit advocacy group and not a university. In fact, on their homepage, it states:

“Prager University is not an accredited academic institution and does not offer certificates or diplomas.”

This advocacy group, co-founded by Allen Estrin and talk show host and writer Dennis Prager, creates videos on various political, economic, and sociological topics that promote an American conservative viewpoint. So with this information alone, I think we can have a better idea of what to expect.

I work in academia and public service at a community college and have lived experience as a formerly homeless person. My experience has found that conservative viewpoints do not typically support and represent poverty and homelessness in the best manner.

My first impression of Prager University is that they falsely represent themselves as a real college, which they are not. I assume many of their viewers are watching documentaries like this, assuming that they have the credibility and academic resources to back their data and viewpoints. In reality, that is not true.

If you’ve gotten this far into my article, I recommend checking this video out. And, I only recommend it now after providing a buffer for what you can expect.

With that said, here’s why I think PragerU not only falsely presents itself as a credible resource but also falsely represents the homeless crisis!

Let’s review some key points shared in this video.

The second is that Housing First does not work.

I know. Insane! Says the person who hopped from one family shelter to the next (me), where most of my sheltered neighbors were no different from you and me – Just regular families trying to get by. They were simply the working poor with no access to affordable housing, enduring probably the most traumatic event of their lives.

Back to the video: They start by zooming in on homeless individuals who appear to be struggling with drug addiction. Right from the start, we’re given a demonizing view of homeless individuals from a very conservative viewpoint. As you can imagine, this “documentary” completely disregards the real social and class issues many of us experience: low wages and high cost of living.

According to the National Coalition for the Homeless, the primary issue contributing to homelessness is “a lack of affordable housing and the limited scale of housing assistance programs….”

Moreover, “The National Low Income Housing Coalition estimates that the 2017 Housing Wage is $21.21 per hour, exceeding the $16.38 hourly wage earned by the average renter by almost $5 an hour, and greatly exceeding wages earned by low-income renter households. In fact, the hourly wage needed for renters hoping to afford a two-bedroom rental home is $13.96 higher than the national minimum wage of $7.25.”

So yes, it’s not surprising that family shelters are filled to the brim. It’s no surprise that Section 8 (public housing) waitlists are several years long, assuming it’s even open to new applicants. The fact of the matter is that many low-income, working families in New York City can’t afford the astronomically high rent. Eventually, they will find themselves at shelter intake, just like I did.

We’ve come far enough to afford shelter from the elements for every living person. And no, we aren’t all addicts. As for those who are, many of them became addicts as a response and way to cope with the traumatic experience of living on the streets. And even if addiction did lead to homelessness, why should it matter? Addicts deserve housing, too.

In the same breath, not all homeless people become homeless because of mental illness. That does not mean homelessness does not cause severe life-long trauma.

The other assertion claimed in this documentary is that Housing First does not work. However, according to National Alliance to End Homelessness, a considerable and growing evidence base demonstrates that “Housing First is an effective solution to homelessness.”

There is no doubt in my mind that Housing First would work. The bottom line is that homelessness is a traumatizing event. It drastically alters a person’s life and long-term health and stability. The faster we can get people off the streets, the better. Suppose we can prevent it from happening in the first place, even better.

However, as mentioned above, housing needs to be available for Housing First to reach homeless individuals. That continues to be a challenge.

Before I checked into my first homeless shelter, I called and emailed hundreds of homeless assistance programs to help me get rapidly rehoused. It simply did not work because there was no housing.

Rapid rehousing would save lives. Housing First would prevent drug addiction, violence, PTSD, chronic illness, and death. But housing must be available, requiring more accessible housing in general. That would require affordable housing and access to housing that did not require high credit scores. It would require an income that equals 5x the rent when a great deal of the working class spend half of their income on housing and have student loan debt.

Seeing content like this about homelessness is very disheartening. While I’m housed today, I have homeless friends who have been homeless for a very long time. It feel like they are no closer to being housed, and I am not safe from experiencing homelessness again.

It’s more than that. I worry about my peers, who are often a paycheck away from eviction. I worry about the children I don’t have yet, and the direction things are going in.