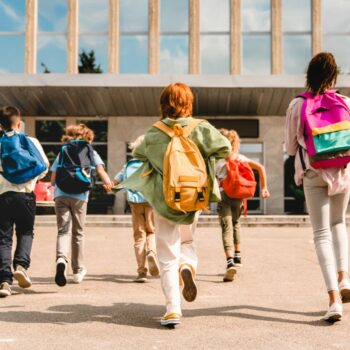 When you envision the “typical” homeless person, do you see a middle-aged man on a freeway holding up a cardboard sign with a story of woe emblazoned in magic marker? Or do you see an empty desk in an elementary school classroom, an unworn uniform, and a child’s name that’s always called but never present?

While both of the aforementioned scenarios are tragic, according to school records, the second description – the child absent from their assigned classroom – is much more emblematic of homelessness in America.

Here at our publication, we sometimes refer to members of the unhoused community as “Invisible People” because we, as a society, look right through them. Houseless humans are more likely to be ignored by their peers, legislators, and the general population. However, on paper, they exist – well, to some extent, anyway.

Many of the statistics you read in the media about homelessness are limited to homeless adults and sometimes unaccompanied teenagers. Because homeless children live in more obscure situations, they are drastically undercounted in government records.

If you really want to know just how many children are actually homeless, you need only look at the school’s records, a database that’s equally important although seldom cited.

The National Center for Homeless Education identified 1.5 million homeless school-aged kids in the 2017-2018 school year, a number that School House Connection states is an 11% increase from the 2016-2017 school year, the year that broke the record for most homeless school children in history.

Incidentally, according to Early Childhood Homelessness State Profiles: Data Collected in 2018-2019, another 1,297,513 homeless children are under the age of six, meaning their homelessness is likely not reflected in school or government records.

If you’ve sharpened your pencil and done the math, you see that we’re swiftly approaching the 3 million mark for children experiencing homelessness.

With Millions of Children Left Behind in Homelessness, How Do They Legally Attend School?

The answer, sadly, is that many unhoused children don’t attend school, which is why their homelessness can be quantified through their absences. However, a little-known fact is that children facing the hardship of homelessness still legally have a right to education either in their school district of origin or, if they are in the shelter system, then the school district where their homeless shelter is located.

In 1987, when awareness of the homeless crisis was increasing, Congress passed the Stewart B. McKinney Homeless Assistance Act. This act and subsequent legislation have gone on to ensure that students’ educational rights are upheld – at least on paper.

Currently, the act functions under a slightly different name, the McKinney-Vento Act, and features a few changes to the original law. In brief, the McKinney-Vento Act ensures the legal right to education for “students who lack a fixed, regular, and adequate nighttime residence,” a criterion that lacks precise definition but typically includes:

Under the law, local educational agencies, often referred to as LEAs, are tasked with identifying youth experiencing homelessness and providing support, services, and strategies to foster educational growth.

According to the Department of Education, school liaisons should work in tandem with child welfare agencies, child advocates, resource parents, case workers, and, in some cases, lawyers to ensure that education is provided in a manner that suits the best interest of the child.

Disruption of education due to homelessness is not ideal and should be avoided if possible. However, if a student enduring homelessness does miss multiple marking periods of attendance due to a lack of stable housing, even in cases where the student was a runaway or in the juvenile detention system at the start of the school year, they are still covered under the McKinney-Vento Act and have the right to return to their school of origin or the school located near their current temporary residence.

School of Origin vs. Changing Districts

Barriers and Loopholes in the System

Many homeless students are reluctant to identify themselves as homeless. Many LEA liaisons face difficulty deciphering which students are in an unhoused situation. This results in students missing out on McKinney-Vento services because they either don’t realize they qualify for them, or they don’t know the services exist.

Runaways and students fleeing domestic violence might avoid authority figures altogether. Thus, in a world where education is a cornerstone, homeless children are building futures on a shaky foundation. Some of the barriers to success that exist for this population include:

Talk to Your Policymakers About Homelessness and Education

We must do better. Please urge your local policymakers to prioritize better outcomes for homelessness and education.

“Back in Arizona, it was like, off and on since I was like 9 years old,” Robert told interviewers at Invisible People when asked how long he had been enduring the hardship of homelessness. Throughout his candid...

Homeless Woman Shares Her Thoughts on Suicide as She Struggles with Chronic Illness While Living in a Van I’m not sure what is worse: Being in agony and wanting to die or having no one that you’re allowed to say that to...

“I didn’t realize how flammable these tiny homes are. I mean, these things were just involved. And it was just spreading from like one to the next very rapidly.” – AMVETS Volunteer Rob Reynolds comments on the latest...

The Cicero Institute Makes Homelessness Worse for Everyone