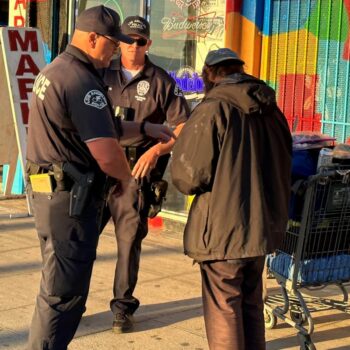 And Why Is It Becoming Such a Trendy Thing to Do?

You may hear the phrase “criminalizing homelessness” more often these days but struggle to understand what that actually means. Surely there isn’t a law on the books that says, “it is illegal to be homeless so any homeless person will be arrested and jailed,” is there?

Well, not in so many words. But there are many laws that work together to produce the same effect – unhoused people being arrested and jailed simply because they don’t have homes to go to.

Criminalizing homelessness essentially means taking a basic, everyday activity that humans need to do to live and passing a law that makes it a crime to do that basic thing if you don’t have a home to do it in. Here are a few examples:

One of the most thinly veiled ways to criminalize homelessness is to institute public camping bans, which make it a punishable offense to be seen camping on public land. These bans are gaining popularity mostly because they’re being heavily pushed by the Cicero Institute, a conservative think tank with a vested interest in keeping prisons full.

Because of this organized effort, these bans all share similar or identical language and function similarly. They set up an insufficient number of state-sanctioned camping zones with strict rules, short residency limits, questionable private security patrols, and not nearly enough space for everyone. Then they use the existence of that “safe camping zone” as an excuse to mistreat unhoused people everywhere else and sweep encampments at will, stuffing everyone who doesn’t fit in the allotted camping spaces into prison instead.

In an effort to force compliance with these bans, some states are even going as far as to cut funding for homeless services in cities that refuse to enforce the ban. That fact alone plainly shows that their motive was never altruistic.

Sit-lie laws are municipal ordinances that make it a punishable offense to simply sit or lie down on the sidewalk or in certain other public places. These laws make sleep and rest luxuries that only those rich enough to maintain stable housing can afford.

They’re also enforced almost exclusively against unhoused people. Think about it. When was the last time your picnic in the park was interrupted by police officers telling you that you’re not allowed to sit down in this public park and better move along before you get arrested? Not likely, even if you had to nap after eating too much of the cheese plate.

A lot of sit-lie laws employ a common tactic in anti-homeless rhetoric: shifting the focus to another oppressed class. In this case, proponents try to misdirect your attention to disabled people with mobility impairments, insisting that people sitting or lying on sidewalks is an insurmountable obstacle for them.

Never mind that disability activists have never once asked for this accommodation. If there were ever an issue, it could easily be resolved by a quick conversation asking the person in question to briefly shift out of the way. We don’t need a law where a simple “excuse me” will suffice. Honestly, how do these politicians navigate the aisles of a grocery store without passing a law making it a crime to stand too long in front of the milk case?

Camping bans and sit-lie laws are just the latest incarnations of a phenomenon that has been going on for decades. A sizeable slice of the housed population just doesn’t want to see the unhoused population at all. So, they keep passing laws to try and force homeless people out of sight and out of mind.

Anti-loitering laws are another vintage attempt at this goal. However, they’ve largely been declared unconstitutional, spurring anti-homeless people to get more creative with the newer types of homeless criminalization laws.

In their heyday, anti-loitering laws made it an offense for a person to be in a public place without an apparent reason to be there. Of course, this is exceptionally vague, allowing officials to use it against anyone and everyone in theory. In practice, these laws were enforced unevenly to say the least.

They’re basically like a “send person to jail free” card for anyone you don’t like the look of, which is a favorite pastime of NIMBYs who ate these laws up, but also a flagrant violation of our First Amendment rights. After these laws were taken off the books, anti-homeless groups had to be a little more crafty with their criminalization efforts and come up with the “fake concern” tactics we see them use today.

What are you to do if you’re a NIMBY or “concerned businessperson” who lives in a city that has refused to implement these rights-infringing homeless criminalization laws? You may not be able to dial 911 and have a random homeless person arrested or worse, but at least you can put a bunch of spikes anywhere that might be relatively comfortable for someone to sit or lie down!

Hostile architecture is the vigilante approach to sit-lie laws in which you make your building or neighborhood totally inhospitable by destroying all the human comfort available in it. This is the reason we have fewer and fewer places to sit in public places.

There are benches with weird “armrests” that prevent people from lying down comfortably. Buildings are covered with extreme slopes or literal spikes wherever there would otherwise be a smooth, flat surface big enough to rest. There are even sonic approaches- some buildings use speakers to play intermittent or annoying sounds so that no one will hang around outside very long.

Some people are so afraid of the “homeless boogeyman” in their imagination that they’re willing to destroy comfort and accessibility for themselves and others just to guarantee that no one living on the street will find a little comfort in a hard world.