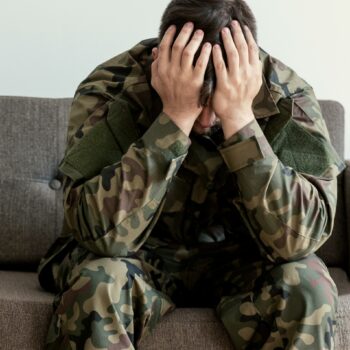 It is estimated that war has existed for an astonishing 13,000 years, 8,000 years longer than any written historical recording. This means that before early humans picked up their clay tablets and started documenting everything from catastrophic weather events and oral history to mundane lists of property, they had already picked up their weapons and engaged in organized battle.

The evidence of this is said to exist in a site known as Jebel Sahaba or Cemetery 117, where archeologists uncovered the remains of 61 individuals believed to have been engaged in armed combat when they died. Their bones are embattled with injuries sustained by arrowheads and projectile weapons.

The age-old debate about whether war is an innate aspect of human behavior or a dated concept, a hatchet to be buried, rages on. Still, it is certainly not with any shortage of soldiers.

The U.S. Military actively enlisted more than a million soldiers in 2022. Every last one is 50% more likely to become homeless when they return to American soil.

So, remember, when you hear that veteran homelessness has recently been cut in half, that’s only half the story. The truth is that 1.5 million veterans are currently living at risk of homelessness due to factors like:

Worse still is that many veterans who experience homelessness emerge from that situation not wanting to live at all.

From the moment veterans set foot on American land, the increased risk of winding up on the streets is evident, particularly if that person is living alone.

Abandonment is an issue unique to this subset of individuals. Many of them feel abandoned by their families, society, and the country they once vowed to protect. In most instances, this is because they have been abandoned by everyone mentioned above.

According to The National Veterans Foundation, one in five U.S. veterans live in complete solitude, with higher divorce rates and lower marriage rates than the non-military population overall. This lack of support begins with the immediate family but also branches out to encompass the broader society, resulting in an increased risk of becoming unhoused.

By itself, this increased risk, technically referred to as housing instability, is enough to increase suicidal thoughts. Studies like this one provided by The U.S. Department of Veteran Affairs show that veterans with a record of housing instability were six times more likely to report suicide ideation when compared to other veterans with stable housing.

Tragically, if that housing instability gives way to actual homelessness, those numbers trend higher, and so do the stakes.

According to the V.A., Veterans Who Endure Homelessness are 11 Times More Likely than Fellow Housed Veterans to Report Lifetime Suicide Attempts

As you can see, even the scourge of war somehow pales compared to the harrows of homelessness for houseless military veterans. These individuals report lifetime suicide attempts at a rate eleven times higher than their fellow soldiers living in houses. This is a devastating stat once you consider that all U.S. veterans, regardless of housing status, are 1.5 times more likely to die by suicide.

The number of homeless veterans who actually die by suicide is difficult to quantify because the deaths of unhoused individuals are rarely tallied. According to estimates provided by the V.A., for every day that passes, 20 veterans die by suicide. How many of them do you suppose are homeless?

Taking Charge: Addressing Veteran Homelessness is a Must

Literature on veteran homelessness and suicide raises more questions than answers. Perhaps this is because all three subjects are conceptually misunderstood. To address this dire issue, the V.A. suggests that all V.A. medical centers employ at least one S.A.V.E. trainer to assess risks for self-harm within this subgroup of soldiers.

The acronym “S.A.V.E.” means a person who is trained to:

While addressing mental health conditions that arise in a post-military environment is always advisable, we could also prevent many of these suicides by preventing the homelessness that is causing them.

Talk to Your Policymakers About Drafting More Protective Legislation

U.S. military veterans are an at-risk group of people in terms of both homelessness and death by suicide. What remains unclear is why we’ve let this predicament continue unchecked, even as the world remains at war. Because while war has always existed, homelessness has not.

Please talk to your legislators about waging a new war – one on homelessness, a completely avoidable condition that has already claimed too many lives.

*If you or someone you know has suicidal thoughts or ideations, please contact the National Suicide Prevention Lifeline? at 1-800-273-8255.

“Setting fires in residential buildings while occupants are sleeping is a truly despicable crime. These fires endangered the lives of the innocent residents and the Firefighters who bravely responded to save them.” FDNY...

Advocates and nonprofits in Tucson, Arizona, are raising $1.4 million to operate a tiny home village for the region’s unhoused as federal data shows the number of people sleeping outside continues to grow. The Homing...

We’re far enough into the new Congress to be able to answer most of the remaining questions left open in my November 30 post. So let’s talk about how Congress will be different in the coming two years, and how our...