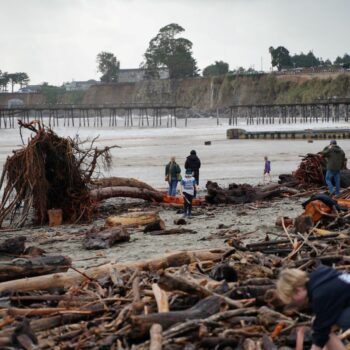 If you’re generally tuned in to what’s happening in the world, you’ve probably heard at least a little about the powerful storms or ‘atmospheric rivers’ that the West coast of the United States has been experiencing in the past several weeks.

While a bit of water might seem like a good thing for states that are more and more often experiencing drought, this is entirely too much water coming down entirely too fast.

The results have been devastating, sometimes deadly. As with all things, the unhoused population in the area is most vulnerable to the ill effects.

As the rains came down and flood waters began to rise across California and Oregon, unhoused people were advised to evacuate encampments in particularly vulnerable locations like Bannon Island. Homeless people access this small landmass along the Sacramento River with a makeshift raft during storm surges, typically when officials let water out of the dam upstream. Officials issued a mandatory evacuation order in San Jose for unhoused people living in creek areas, which many of the city’s 5,000 homeless people do.

Across the 23-mile American River Parkway, a helicopter was deployed to warn residents of the coming storms and inform them that emergency evacuation shelters were open to them. Many residents left the island, while others chose to stay and move their camps to higher ground. Some were barely able to move that far.

Vehicle dwellers are not immune to the ill effects of bad weather, either. While you can stay reasonably dry inside your car, it doesn’t offer sufficient protection against falling debris like trees or power lines. It is also challenging to keep warm safely. And there’s always the possibility of getting into a car accident due to the poor weather conditions. Not to mention the discomfort of being cooped up in an area that may not be big enough to stretch your legs, let alone stand, for hours or days on end.

The best advantage of living in a car as opposed to an encampment might be the ability to drive away to somewhere it’s not raining. However, that’s not always possible if you have a job or other local responsibilities. And with the widespread nature of the storms and the current cost of gas, it may prove very expensive to try and outrun Mother Nature.

How Is All This Affecting Unhoused People?

A bit of rain and wind might seem like a simple inconvenience or even a cozy day for those who enjoy safe, warm housing that protects us from extreme elements. But for unsheltered people, it can be disastrous or even deadly. Rain can seep into tents or makeshift shelters and damage or destroy possessions. The longer it rains, the more likely this outcome becomes. And with some areas topping out at an inch of rain per hour, few shelters stood a chance.

Depending on which possessions are affected, this can be inconvenient or devastating. It can also be a health concern.

Soaked clothing and bedding won’t keep you warm, and there’s no hope of it drying out soon. Getting wet and staying wet can lead to all sorts of ill effects on the body, including fatal hypothermia.

Flood waters are also a much different animal than regular rainwater and can carry dangerous debris or even disease. Remember, floods can sweep up anything from regular trash to rodents to chemical runoff to raw sewage. That’s not something you want to come into contact with for any amount of time, but it’s not always avoidable in an emergency.

Heavy Rains After a Summer of Fires

In a cruel irony, the areas most susceptible to damage from these recent rains are the same areas that would have benefitted from more precipitation earlier. Heavy rains can lead to devastating landslides in fire-scarred areas where wildfires have ravaged trees and other plants that would usually keep things stable. These are perhaps the most violently destructive results of the recent rains.

As of now, there have been 22 deaths related to these recent rainstorms in California alone. Governor Gavin Newsom said the storms have claimed more lives than wildfires within the state during the past two years combined. Wildfires may seem more deadly to the average person who only experiences a casual rainy day. However, these severe storms have proven much more deadly, from rockslides to falling trees to rising floodwaters and car accidents. The effects of these storms have been felt widely.

Several currently identified victims were known or likely to be unhoused people, and it’s still unclear how many more may turn up in time. Their bodies have been found in drainage overflow areas, on the banks of creeks, and in rivers. Two unhoused people were killed by tree branches falling onto their tents. We may never know how many more we may have missed.

No one should be subjected to life-threatening weather events just because they don’t have enough money to pay the astronomically inflated costs of housing. We are literally turning our backs and leaving our poorest people out to die if they can’t pay for the “right” to survive. Never is this phenomenon more evident than when deadly weather events like these West coast storms sweep through. But unhoused people are in danger even when the skies are fair.

How can we collectively accept that we’re living in a society where being poor is a death sentence and still call it fair? How can we insist that all people are born equal and still insist that you pay for your right to live? The cognitive dissonance must stop before any more lives are needlessly lost.

Supporting homeless artists and crafters can make a huge, positive impact on our lives. Every sale helps, for sure. It may not be possible to earn enough to secure housing, but it can help with vehicle maintenance and...

Whenever homelessness is mentioned, the phrase “mental health” is not that far behind. From media to literature, internet searches to intimate conversations, we are constantly reminded of the link between homelessness...

National Poverty Awareness Month is observed annually in January. So, it seems appropriate to follow up on the Topline Findings from the U.S. Administration on Community Living (ACL)’s 2021 Annual Profile of Older...