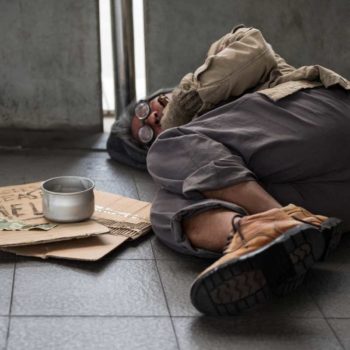 Digital Footprints: The Impact of Negative Portrayals of Homeless People in Social Media

We all live on the edge of superstardom in 2021. Given that there are currently more than 4.33 billion active social media users worldwide, a number that equates to well over half the global population, you are now statistically more likely to be famous than not to be famous. Consider this: Just a few hundred years back, your face only graced the canvas of a painting or the print of an early newspaper if you were royalty or a wealthy aristocrat.

Today, everybody has a bio pic. Every person has a space in someone’s comment section. Even members of society, like homeless people, who have been deemed otherwise “Invisible” are visible online.

Social Media: A Tool or Weapon? Depends Upon Who Uses It

Here at Invisible People, we’ve extensively covered the positive angles of social media as they affect the homeless community. We’ve touched on how having a cellphone, or a screen name can help otherwise isolated individuals make much-needed connections- to family, to friends, to services, in rare and isolated instances, even to jobs and housing. But in the end, social media is a manmade construct. Like other technological advancements brought forth via humankind, it can be a tool or a weapon, depending on who’s handling the equipment.

Picture This: An Unfavorable Photo of You is Published Before the Eyes of Millions

Meet Alvin, an aging veteran who returned home from a long-fought war with a long-term disability. Alvin is an analogy; he isn’t true to life. Instead, his character represents a story that happens in real life all too often. Like many veterans who return home from the battlefield with disabilities, Alvin has limited employment options. He works a thankless job in retail. He goes from serving his country to serving his customers.

But then again, who is serving Alvin?

He was injured before he married. Like many members of the homeless community, he’s a single male. He feels abandoned by his family and his country every time his young body aches like an older man even though he is in his mid-30’s. At the VA, for the much-needed services, he is still waiting. In the meantime, Alvin is waiting on everyone else.

Stocking shelves overnight at Walmart doesn’t yield him enough money to afford a decent dwelling space or any dwelling space for that matter. Days turn into nights, and emergency shelters close their doors on employees coming from the graveyard shift.

Defeated, Alvin falls asleep outside, on the steps of the building where he once lived. When the sun rises, social media influencers snap their photos like paparazzi flocking around a worn-down celebrity. They make sure to capture Alvin from all the worst angles and post the pics under the latest, most hateful hashtags. The scrolling timeline never fails to paint poverty as a personal failure, even though all the evidence suggests it stems from systematic discrimination woven into the very fabric of our social structure. And unlike the rest of us social media superstars, Alvin has no control over his image. There is nobody to stop the bloggers and/or NIMBYs from painting him in such a light that his image supports their anti-homeless campaign. The blame game begins. But, where does it end?

Bridge to Nowhere: How the Nimby Narrative is Rooted in Fake Concern

With an eviction crisis looming and a housing and homeless crisis already here, it’s surprising to see such a rise in Not-In-My-Backyardism- yet here we have it. There it is. The oh-so-familiar sound of selfishness echoes out as people who are staunchly opposed to homeless people (rather than being opposed to homelessness) speak out.

The danger in this new voice is that it’s gilded with false concern and supported by feelings rather than the facts. The facts say that the leading cause of homelessness is a lack of affordable housing. NIMBY’s want it to be drug addiction, mental illness, or just plain laziness. They will resort to anything to make their ill-informed opinion look like fact. The latest tactic in the hate campaign is homeless people’s pictures.

We all know that pictures can be altered and manipulated. When we view a photo of something unrealistic, we do so with a skeptical eye. We understand that what you see in the age of digital editing software is rarely what you get. Yet, when social media accounts are crafted, and their entire foundation is based on making homeless people look bad, we believe them? That doesn’t seem realistic. But sadly, it’s true.

We await the study someone does on this regarding homelessness. For now, we will rely on a study that proved that negative social media imagery reinforced mental health stigmas. This study concluded that negative tweets simultaneously trivialized and stigmatized mental health conditions. In turn, negative tweets swayed public opinion regarding individuals who suffer from schizophrenia in a negative direction. With homelessness, this is even more true. Since fear drives us to want to see homelessness as a personal failure rather than a systematic one, we already embrace negative stigmas. As such, it’s easy to see how NIMBY bots and influencers are creating a hate culture that continues on unchecked.

If you are posting pictures of homeless people engaging in life-sustaining acts and ridiculing them online, your creative license needs to be revoked, suspended. You should be ashamed of the person staring back through your monitor’s reflection. Whether you have ten followers or ten million, it’s never okay to paint an unknown subject with a broad brush for personal gain.

Demand your legislators draft laws that protect homeless people from online slanders. While such acts may seem harmless, we carry our digital footprints with us forever. We deserve to be in charge of what they show.