How States Are Using ARPA Funds to Address Homelessness 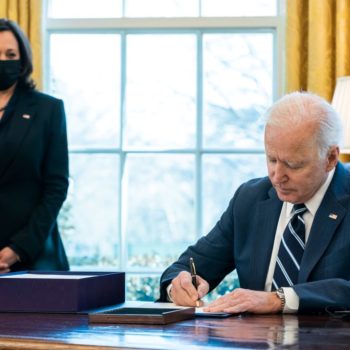 COVID-19 pushed millions across the United States to the brink of homelessness and beyond. It also helped expose many of the systemic issues that prevent people from escaping homelessness and forced many states to reconsider how they should respond to the crisis.

Nationwide, more than a half-million people sleep on the streets every night. There is also a shortage of seven million affordable rental homes for the lowest-income households. The gap of affordable rental units could grow by another one million over the next decade without significant housing investments.

In response, a handful of states have allocated funds from the American Rescue Plan to bolster their homeless response systems. While these investments are both necessary and overdue in some cases, experts hope they are a sign that more help is on the way as the calls for government housing investments get louder.

President Joe Biden signed ARPA, a $1.9 trillion stimulus package, into law in March 2021. The bill provided states with significant grant funding that can be spent on human services, housing, general infrastructure, and more.

States began receiving funding shortly after the ink dried on the bill. According to the National Council for State Legislatures, many used the funds to make immediate infrastructure improvements such as extending broadband into rural areas and cleaning up their water systems.

But as the calendar turned to 2022, many states have begun allocating their ARPA grants toward affordable housing and homelessness reduction programs.

Arizona is one state that is using its ARPA funding to address several levels of housing instability. The state has allocated more than $10 million direct to homeless service providers, while another $7.5 million went to bolster its services for victims of domestic abuse. It also allocated $7.2 million to build a 58-unit shelter for Native American youths experiencing homelessness.

Nevada allocated a sizable portion of its overall ARPA funding toward affordable housing projects. The state division of housing recently released a plan to spend more than $500 million on these projects, representing approximately 18 percent of its total funding.

Rhode Island lawmakers have also put forward a plan to spend more than $12 million to preserve affordable units in the state this year. The state will also allocate more than $13.5 million to redevelop properties into affordable housing and expand its housing navigation services.

These investments come as calls for the government to provide more affordable housing and address increasing homelessness grow louder.

President Biden said in his State of the Union address on March 1 that his administration is still working to pass the housing investment contained in his Build Back Better legislative package. Some of these investments include increasing the number of housing vouchers by 300,000 and funneling more than $170 billion to the states to address the historically low supply of inventory.

The Center for Budget and Policy Priorities (CBPP) has described these investments as necessary to meet “pressing, unmet challenges.”

“High levels of housing-related hardship do not need to continue,” Will Fischer, the Senior Director for Housing Policy and Research at CBPP, wrote. “In most similarly wealthy countries, a far lower share of renters pay over half their income for housing than in the [U.S.].”

Fischer said that states should focus their attention on their emergency rental assistance programs. The pandemic showed that these programs are necessary to prevent future homelessness but are often woefully under-resourced.

States should also allocate money toward improving their housing choice voucher systems, Fischer said. This program has proven effective at lifting both seniors and youths out of poverty. Increased vouchers helped lift more than 2.4 million people out of poverty in 2020, according to CBPP’s analysis of the federal supplemental poverty measure data, which includes benefits like vouchers.

“As lawmakers seek a compromise agreement on Build Back Better, they should retain meaningful investments in vouchers and other well-targeted housing assistance, which would substantially reduce some of the most severe hardship that exists in the U.S. today,” Fischer said.

The pandemic proved that we need to rethink housing in the U.S. It also showed that aid programs work when providing agencies and service organizations with sufficient funds and clear guidance on spending aid dollars.

Contact your officials and representatives. Tell them you support keeping many of the pandemic-related aid programs in place for future use. They have proven effective at keeping people housed, which is the first step to ending homelessness once and for all.