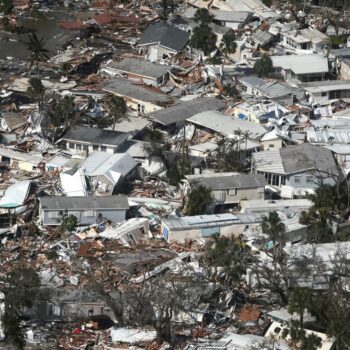 A Catastrophic Storm Swept the Coast of Florida Last Week, and People Experiencing Homelessness Are Likely to Be Left Out in the Cold, Again.

Diane Yentel, President and CEO of the National Low Income Housing Coalition, issued an urgent tweet on Twitter that read:

“Homeless people – especially those living in cars, RVs, encampments – won’t have access to resources/info on #HurricaneIan evacuations. Special outreach & attention by city/state officials is crucial to ensuring most marginalized people survive the storm.”

It’s a known fact amongst advocates that people weathering the storm of homelessness are more likely to die in weather-related deaths. Such deaths can occur immediately or later down the line, depending upon the level of exposure. This likely contributes to the significant reduction in life expectancy even among formerly homeless individuals.

While storms wreak havoc without prejudice, low-income earners are likelier to live in unstable housing that might collapse under intense winds or be whisked away by sweeping, uncontrollable floods. They are simultaneously less likely to be able to afford the typical costs of relocation, which include things like:

For the above-listed reasons, storms like Ian tend to displace poverty-stricken individuals and families. They are thrust into “transitional homelessness,” which happens suddenly and usually due to an emergency. And while low-income earners are in the precarious situation of possibly becoming homeless due to inclement weather, people who are already homeless face an even harsher reality – the looming possibility of death.

President Joe Biden said on Thursday that Ian could easily become one of the deadliest storms to strike the Sunshine State. The president urged Americans to brace for a “substantial loss of life” as its torrential downpours soaked the sunny Florida Coast. The storm shifted and transformed multiple times, morphing itself from Category 5 to Category 4 and back again. But when it comes down to politics, nothing has changed.

The poorest people in America are being hammered further into poverty. At the same time, those with the most resources can safely escape the scene, hiding away in second houses, vacation homes, and friends’ homes. Such is the contrast, but what is the price?

Alerts Can Save Lives but Are Unlikely to Reach Homeless Populations

Preparation is one of the best ways to survive a pending natural disaster. But people need the warning to prepare. Sadly, the people who need that warning most are also the least likely to get the message because they lack access to resources their housed counterparts have at their disposal.

In a report published by the Journal of Public Health Management & Practice, author June Gin, Ph.D. and emergency management evaluation colleagues determined that unhoused individuals and families are:

To quote the paper directly, “communities across the United States have frequently failed to adequately address the needs of homeless populations in disaster planning, response, and recovery.”

Advocates and researchers like CEO Diane Yentel and Dr. Gin call for more outreach, guidance, and service continuity. If homeless service providers were on the streets in the weeks and days prior to emergency evacuations, many disasters and even deaths could possibly be prevented.

Some of the most prevalent barriers to information and life-saving resources for our unhoused neighbors include:

Eying the Storm: As Climate Change Deepens, These Threats Become Even More Severe

As greenhouse gas emissions envelop the earth, Yale researchers and multiple other scientists suggest that violent storms like hurricanes, typhoons, and cyclones will increase in abundance and severity. In coming years, these storms are projected to encroach on regions that have not been prone to storms in the past. And by past, scientists are referring to the 3 million years leading up to today.

While the topic is part of a larger, more complex debate, there is no doubt that high-intensity storms are known to displace millions of people and that displaced people are more vulnerable to death and injury.

Get In Touch with Your Local Representatives

Nobody should have to die in a storm simply because they have no place to go. Even when the skies clear and the storm is behind us, there will undoubtedly be a pathway of destruction winding before us, seemingly infinite in nature.

Contact your local representatives about delivering important messages to the homeless community promptly. Demand they draft legislation that will create a future where nobody is without a home.

Media portrayals and the public image of homeless people are typically negative, however ill-deserved. My own homelessness was due to mental illness that was like torture. I have since recovered and now work in...

As a service provider, my lived experience of homelessness aids my ability to connect with the people I serve. It also makes it impossible for me to ignore when narratives about homelessness contradict those experiences...