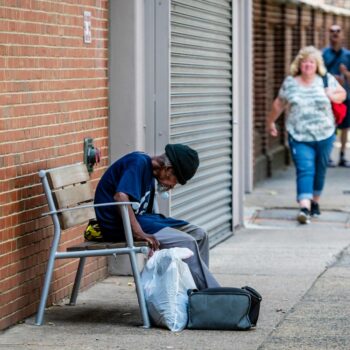 On some level, we all understand that it’s more expensive to be poor, but many of us still balk at the concept when it’s laid out plainly like that.

But think about your own purchasing decisions. At the grocery store, do you ever pay more upfront for a larger package of something that works out to a lower cost per ounce? Do you stock up on sale items and keep them in the freezer until you need them? When you have the means, do you spring for a higher quality item such as shoes or coats so that they last longer, and you don’t have to replace them as often?

These simple money-saving tactics are out of reach for many of our poorest neighbors, who are forced to pay a higher price more frequently just to maintain access to necessities. That’s why I say it’s expensive to be poor.

Sure, But Is It Really That Bad?

These small differences in costs may not seem that egregious, and maybe for someone with a comfortable income, they’re not worth considering- but to someone relying on meager assistance or the kindness of strangers, every cent counts. Small differences in pricing can add up to a big difference over time. This idea is perfectly summed up by “Boots” theory, a popular example of this phenomenon famously explained in a Terry Pratchett Discworld novel as follows:

“The reason that the rich were so rich, Vimes reasoned, was because they managed to spend less money. Take boots, for example. He earned thirty-eight dollars a month plus allowances. A really good pair of leather boots cost fifty dollars. But an affordable pair of boots, which were sort of OK for a season or two and then leaked like hell when the cardboard gave out, cost about ten dollars…”

“But the thing was that good boots lasted for years and years. A man who could afford fifty dollars had a pair of boots that’d still be keeping his feet dry in ten years’ time, while a poor man who could only afford cheap boots would have spent a hundred dollars on boots in the same time and would still have wet feet. This was Captain Samuel Vimes’ ‘Boots’ theory of socioeconomic unfairness.”

In the example, the rich man with enough resources to buy a more expensive, high-quality item upfront not only has a better outcome for less money, but he also was able to save up an additional $50 to put toward other needs or goals. At the same time, the poor person is stuck in a never-ending loop with nothing to show for it but wet socks.

People in poverty are paying more money for less quality. This self-perpetuating cycle keeps them both in poverty and misery.

If you’re someone who gets the bulk of their income from panhandling or other cash payments, it can be challenging to secure basic necessities in an increasingly cashless world. Most infrastructure these days is built to accept electronic payments, and many of the poorest people are unbanked, with little to no access to electronic payment methods.

Even when there is an option to pay cash, it usually involves traveling to a specific location during specific business hours, which may or may not be possible due to a person’s schedule or transportation options.

Carrying only cash has its drawbacks as well, which is why most of us with the option to choose, choose not to. Having all the money you have in the world on your person or stored in a car or tent makes those resources extremely vulnerable to being lost, stolen, or destroyed in a fire or encampment sweep.

People living in poverty get extremely ruthless with themselves when it comes to triaging their needs or the needs of their families. It’s not uncommon to be faced with several emergencies at once and only being able to fund one and a half of them. How do you decide between repairing the car you live in, buying groceries this week, and paying off a public camping citation that may lead to your arrest if you ignore it?

There’s really no good decision there. The stress of navigating these no-win scenarios over and over really takes a toll on a person.

We know that people in poverty make different choices than people who aren’t in poverty. This fundamental misunderstanding is often a source of laughter and derision for financial gurus with radio shows or podcasts. But the truth of the matter is that people do things for a reason. It may be difficult for someone who’s never experienced poverty to understand why poor people make the choices that they do, but that doesn’t make them the wrong choices for that person at that time.

But I’m not just talking about poverty changing your decision-making process and point of view. Poverty can literally change the function and physical structure of your brain.

A growing body of research has found that when a person lives in poverty, the constant stress of it can cause the limbic system to overload the prefrontal cortex with stress and fear messages. This causes the prefrontal cortex, responsible for solving problems, setting goals, and completing tasks efficiently, to function sub-optimally.

Many of us have experienced this during a particularly stressful period in our lives, but the difference with prolonged poverty is how long it lasts. Because being poor is extremely stressful, with new challenges to overcome each day, the brain never really gets a break. This can lead to the overwhelmed brain making mistakes, leading to more stress and problems, which leads to more overwhelm in the brain, and the cycle repeats ad nauseum.

For most people and families, this constant cycle of stress can be easily solved by the one thing they can never seem to get enough of – money. As much as we like to say money can’t buy happiness, it can at least buy security, peace, and time to think clearly. And that’s pretty darn close.

While some communities are still counting votes, there are enough final results to provide a general idea of what the 118th Congress will look like. This post will give my initial thoughts about how Congress has...

Invisible People is proud to announce we have been named a recipient of a racial equity grants given by the Chan Zuckerberg Initiative (CZI). We are one of more than 25 recipients of the grants, which support...

Earlier this month, officials announced that veteran homelessness dropped 11 percent between 2020 and 2022. But Los Angeles, once called the homeless capital of the US, seems to have missed the memo. In a lawsuit filed...