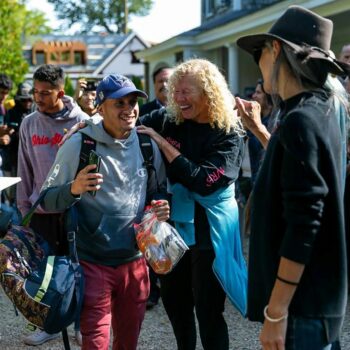 Earlier this month, news broke that two planes carrying illegal immigrants had arrived in Martha’s Vineyard. They’d been told there would be opportunities waiting for them, including jobs and social programs. Not only were there no opportunities waiting—there were no resources at all.

This story calls to mind the many homeless people ensnared by “relocation programs.” They are also moved from someplace that, while not ideal, is at least familiar and dropped off somewhere new and unknown. Homeless relocation programs have been going on for decades. Despite the outrage and uproar directed at those responsible for the Martha’s Vineyard relocation, these programs will continue to do so right under our noses.

Authorities in Martha’s Vineyard were equally surprised by the immigrants’ arrival. Florida governor Ron DeSantis’ office claimed responsibility for the relocation, presumably to help launch a new immigrant relocation program that’s been developing in the state for a while. No official details or plans to implement it have been released, however.

Adding to the confusion is the fact that the immigrants were flown from Texas, not Florida.

Although questions remain about why those responsible chose the immigrants from Texas, the reasoning behind the action is clear. DeSantis’ actions are believed to be a political stunt. Evidence for this includes:

Texas’ own illegal immigrant relocation program, Operation Lone Star, has been bussing people out of the state since April. It is seen as equally cruel.

The assumption was that the immigrants would be left to suffer and fend for themselves. They weren’t, thankfully. Residents and local authorities of Martha’s Vineyard gave them food and shelter and helped get them resettled on Cape Cod.

But while the act of manipulating and then abandoning human beings is disturbing enough, what may be more disturbing are the attempts to diminish their humanity. Successful or not, this stunt sent the message that one person in power can directly cause fifty people to suffer out of nothing more than a desire to prank and taunt their opponents.

What Are Homeless Relocation Programs?

It’s a type of dehumanizing we’re familiar with in America. The same thing happens daily to homeless American citizens, equally “othered” by those in power and left to suffer, yet garnering very little of our attention.

Relocation programs are simply programs that offer free one-way bus or plane tickets to homeless people so they can live elsewhere. The programs are concentrated in areas with the most homelessness, in states like California, Nevada, and New York. The most common destinations are Atlanta and Miami.

Homeless people must voluntarily sign up to participate in these programs, often for reasons such as having connections in destination cities. Other times the destination simply offers a fresh start.

Just like the Martha’s Vineyard relocation, sometimes they’re given false hopes or impressions of what awaits them. But when a decision is made without the right information, it isn’t an informed decision. Participants are not only led to believe by caseworkers that they’ll find success elsewhere; they’re told they’ll receive follow-up calls to ensure it.

This follow-up care rarely happens. If there’s no one at the other end of the journey to receive them, they’ll continue being homeless. However, now they are in a strange and potentially hostile place. This can be a death sentence for someone who depends on familiar services for food and shelter.

With homeless relocation programs, the emphasis is always on getting the homeless people away from one location. In other words, out of sight, out of mind.

Homelessness—just like illegal immigration, apparently—is bad for a city’s image.

Political leaders don’t want to be blamed for unsightly evidence of bad or weak policy. They want their governances to appear clean, wealthy, and thriving. If homeless people can simply be picked up and moved elsewhere, this goal becomes more achievable.

We Ought to Be Equally Outraged by Both

There are many similarities between the homeless people participating in relocation programs and illegal immigrants in DeSantis’ program. They were all:

There has been so much time, money, and work spent on sending off our least-wanted residents. If we could channel those resources instead to creating lasting, sustainable change for people, maybe we wouldn’t need to make homeless people disappear. We could integrate them into our society instead.

Thankfully, and in what serves as an affirmation of these immigrants’ worth and dignity, DeSantis is being investigated by authorities and sued by the victims. It’s a public recognition of how deeply wrong the stunt was.

Now, if only there were comparable accountability for the tens of thousands of homeless people who have suffered on behalf of relocation programs. If only we could channel all the attention and collective outrage this incident has gathered and use it to help the many homeless people who are desperate enough to also get on a bus or place going anywhere else.

What happened in Martha’s Vineyard was unthinkable and inhumane. We should be outraged by it. But we should be equally outraged by the injustice that goes on every day in America to our own citizens, who did nothing to deserve being packed up and shipped off like stray animals. Our top priority should always be finding better ways to care for our most vulnerable citizens. Perhaps the Martha’s Vineyard reception can serve as an example of how to respond with compassion.

The Epicentre of Canadian Street Homelessness Is Seeing an Uptick in Homeless Death and Assaults The sizeable urban centre hosts a fluctuating number of street sleepers, recording 2,000-plus individuals as of 2019. The...

Tips for Journalists to Improve Reporting on Homelessness Nearly half of Americans are afraid of people experiencing homelessness. About 35 percent of those surveyed agree with the forcible removal of people from...