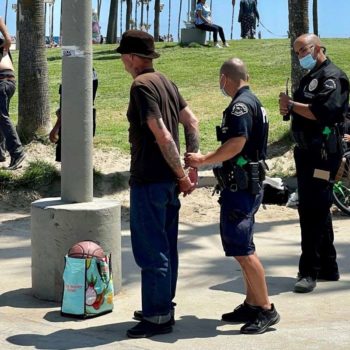 According to a new report by the National Homeless Law Center (NHLC), nearly every state has laws that criminalize acts associated with homelessness.

The report is a first-of-its-kind undertaking to understand how states regulate acts of survival such as public sleeping, camping, and asking for charity. It is a supplement to NHLC’s “Housing Not Handcuffs 2019” report that analyzed the legal landscape of 187 municipalities across the country.

“Criminalizing homelessness is unconstitutional, racially discriminatory, and just bad policy,” said Eric Tars, legal director at the NHLC. “Unfortunately, as our report shows, almost every state in the country has these laws on the books.”

In all, the report found 47 states and the District of Columbia have at least one law restricting acts commonly associated with homelessness. The most common restrictions the report found were against pedestrians standing in roadways, panhandling in public places, and prohibitions against vagrancy.

Meanwhile, a handful of states have enacted much tougher laws that criminalize homeless acts. For example, New Hampshire is the only state in the nation that has a law restricting sleeping in public statewide.

California is another state with several laws prohibiting acts ranging from camping in public to restrictions on sitting, lying down, and eating in certain areas.

Recently, the Los Angeles City Council passed an ordinance that bans urban camping in 54 areas across three council districts in the city. The ordinance also allows the city to spend up to $3 million installing signs that restrict where people can sleep. The money for the project is slated to come from the city’s Homeless Services Commitment Fund.

Missouri, Wyoming, and Oregon are the only states without laws criminalizing homelessness.

However, the report caveats that the lack of laws criminalizing homelessness doesn’t preclude the lived experience of people in these jurisdictions.

The report also found instances where state governments pre-empted the actions of municipal authorities to respond to homelessness. In Texas, state lawmakers passed a bill that requires the state government to cut funding from any municipality that does not enforce its statewide public camping ban.

Other states with similar camping prohibitions like Colorado, Minnesota, and West Virginia are deploying civilian enforcement teams to help enforce their local quality of life ordinances.

Tars describes these policies as counterproductive because they do not address the underlying issues of homelessness and instead seek to remove the aesthetics of poverty from a local area.

“If we want to end homelessness, we first need to stop using these laws to punish people who have been the victims of our bad housing policies, and then focus on fixing those policies to ensure the basic human right to housing for all,” Tars said.

The U.S. court system seemingly agrees with Tars’ stance, too.

In Martin v. Boise, the Ninth Circuit Court of Appeals ruled it is unconstitutional for states to hold people experiencing homelessness criminally liable for sleeping outside when no reasonable alternative for shelter exists.

But, the report also found positive trends in several states. Places like Connecticut, Illinois, Rhode Island, and Puerto Rico have all passed or introduced legislation to establish a homeless Bill of Rights that provides non-discrimination protections.

Similarly, “Right to Rest” laws have been introduced in California, Colorado, Oregon, and Washington, thanks to the Western Regional Advocacy Project. This nonprofit organization works to expose the root causes of poverty and homelessness.

Instead of passing more laws or amending the ones already on the books, the NHLC suggests that states instead pursue constrictive policies like investing in affordable housing to meet local demand.

“Laws that criminalize homelessness do not solve the underlying causes of homelessness,” the report concludes. “Punishing an unhoused person for sleeping outdoors does not obviate their need to sleep, nor does it create a safe place for them to sleep indoors. Instead, criminalization exacerbates a person’s homelessness, often by creating additional barriers to housing and employment.”

Now is not the time to be silent about homelessness. According to data from HUD, homelessness across the country has increased by five percent since 2016. At the same time, the latest Point in Time Count shows the number of people experiencing unsheltered homelessness is now greater than those in shelters for the first time since HUD began the survey in 2004.

Contact your state and federal legislators and tell them you support expanding the federal response to homelessness. Tell them you also support funding and building safe and affordable housing options for our most vulnerable neighbors.