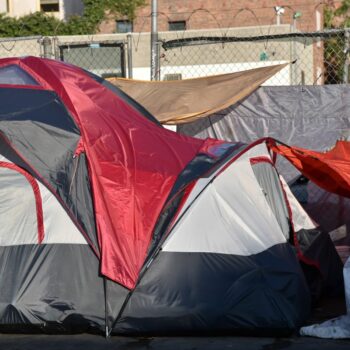 At the current federal minimum wage, someone must work 96 hours a week to afford a two-bedroom apartment.

According to a recent report from the National Low Income Housing Coalition (NLIHC), at current Fair Market Rent (FMR), a household would need to earn an average annual salary of $46,967 to rent a two-bedroom apartment. That’s an hourly wage of $23.

“Even if people are working full time,” the study notes, “they would not be able to afford housing earning minimum wage.”

And according to the study, most people experiencing homelessness—sheltered or unsheltered—are working just shy of 40 hours, so they’re classified as part-time.

“The mean annual earnings for people experiencing sheltered homelessness aged 18 – 64 was $8,169 in 2015 (pre-tax income, which excludes benefits),” the study reports. “Mean earnings for unsheltered people were even lower at $6,934 in 2015 and have generally stayed lower than their sheltered counterparts during the 10-year frame of study. Accounting for inflation, even the top earners in both groups could not afford a one or two-bedroom apartment in 2022, which are $44,200 and $53,706, respectively.”

If the federal minimum wage had increased in line with productivity, it would be $26 an hour. But it still stands at $7.25, the same as it’s been since 2009.

Due to inflation, minimum wage’s value has reached its lowest point since 1956. In no state in the US can a person working full-time earning the prevailing federal, state, or county minimum wage afford to rent a two-bedroom apartment at the current FMR.

And a surprising number of workers only make minimum wage—eleven of the 25 largest occupations in the US, or 35 percent of the total US workforce, excluding farm workers.

More than 24 million people work in the five lowest-paying occupations:

“Workers in these occupations earn median wages that fall more than $6 short of what a full-time worker needs for a one-bedroom apartment,” the study says.

But while wages have stayed stagnant, rent has increased at its fastest rate since 1986.

Corporate Landlords Are Buying Up More Properties Than Ever Before

A number of drivers have caused these increases, including higher demand for rental housing and high inflation. But perhaps most concerning is that corporate landlords are buying more properties than ever before.

The number of apartment units owned by the largest 50 companies went up 25 percent between 2017 and 2022.

Large, absentee landlords are more likely to be “serial eviction filers,” pursuing eviction filings in court when tenants fall behind on rent. This can drive up the cost of rent as landlords try to recoup both lost rent and court expenses.

And the situation is even worse for renters of color, who earn disproportionately less than white renters: the average Black worker earns 23 percent less than their white counterpart, while the average Latino worker earns 25 percent less. People of color are also more likely to be employed in sectors with lower wages, and they’re more likely to be renters rather than homeowners.

With housing out of reach for so many and millions more just one missed paycheck or financial emergency away from homelessness, the NLIHC is urging the federal government to take action to create a stronger safety net. Their recommendations are that Congress do the following:

The report states that these measures are necessary to ensure that people can afford a roof over their heads.

“Stable, affordable housing is a prerequisite for basic well-being,” it says, “and no person should live in danger of losing their home.”

“We cannot arrest our way out of homelessness. Unsheltered communities are often further entrenched in day-to-day difficulties due to costly and needless citations or arrests.” — Jason Groth, Deputy Legal Director...

Trust is Hard Earned When Just About Everyone Despises You With violence against unhoused people rampant, sick pranks an unfortunate possibility, and police officers as unhelpful as always, it’s difficult to know who...