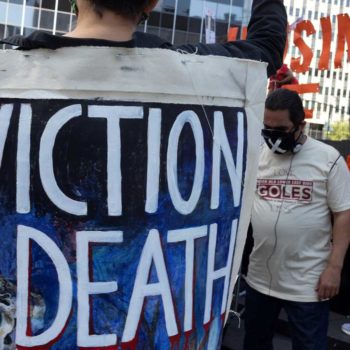 “Under my watch, here in the State of New York, we are not going to exacerbate what is already a crisis.”

Above is New York Governor Kathy Hochul’s response to demonstrators and housing advocates in protest. It was late August, and the nationwide halt on eviction was coming to an unfortunate end. As Governor Hochul would point out, emergency rental assistance was lagging to the point of near non-existence.

Across the far reaches of the United States, millions of renters stood vulnerable to homelessness by way of eviction. In the months leading up to this disappointing Supreme Court decision, many such renters had signed legal documents stating that eviction would likely lead them down the spiraling path of homelessness.

The difference between Governor Hochul and other national leaders is simple. She chose to act per the needs of the people she represents. Others chose to act in accordance with big real estate. In the end, this means that one Governor is addressing the crisis in good faith while most other politicians are creating a crisis of great magnitude. This point is one that bears remembrance moving forward as we head into uncharted post-pandemic territory.

The Big Apple has a big problem. Homelessness. According to Coalition for the Homeless, the city hasn’t hosted so many homeless residents since the Great Depression. The current number of individual people experiencing homelessness citywide is up 108% in this past decade alone. As encampments creep up across city sidewalks and legislators scramble for solutions, the bitter cold of winter threatens to close in on tens of thousands of people living in an unsheltered state.

What is the reason for such dire circumstances? Could it be drug use? Perhaps mental illness? Studies say absolutely not.

For the first time in decades, historically, New York renters were offered a real-life safety net to protect them from experiencing the horrors of homelessness. This came in the form of a national ban on eviction. The vital legislation was formally referred to as the eviction moratorium. Studies show it saved lives by the thousands and likely prevented an unprecedented crisis in the housing market.

While the eviction moratorium was certainly a safeguard that worked wonders in a time of global distress, its downside was simple – it was always temporary. Like glue holding a piece of jewelry together, eventually, if nobody fixes the broken pieces, everything will fall apart.

That is the future Governor Hochul foresaw.

Like most cities, the vast majority of rental assistance in New York has not yet reached its intended collectors – the community members who served on the front lines of the pandemic, many of whom earn lower-income salaries and face the genuine threat of eviction soon. Despite the Supreme Court’s decision to allow unfair eviction trials to regain traction, Governor Hochul put her foot down, hoping to bring eviction to a screeching halt once and for all via a new eviction moratorium.

The New Moratorium is Mostly the Same, but Subtle Differences Could Have a Major Impact

The new moratorium, which was voted into law in late August, functions much like the previous one but with a few distinctions.

Initially, at the height of the COVID crisis, tenants could claim indisputable financial hardship regardless of whether or not the global pandemic and subsequent shutdowns had directly impacted their socioeconomic status. This newer version permits landlords the right to contest financial hardship claims in court. This feature could become problematic given how heavily swayed in favor of landlords our justice system already is.

That said, this slightly limited veil of protection has been extended through January 15th of 2022. Hopefully, it will serve as a deterrent for landlords who consider eviction as a last or even first resort. It’s important to point out that billions of dollars are available for landlords whose tenants are struggling to pay rent. However, Emergency Rental Assistance distribution has been slow-moving (and that is an understatement).

When Governor Hochul took up office, New York City was dead last in the race to reach the masses with rental assistance, having only dispersed about 7% of the allocated funds. Ironically, landlords refusing to participate in the program is one of the top reasons for the delay. With four more months of protection to work with, the city aspires to reach all renters’ need in time. Such action is imperative to preventing homelessness by way of eviction.

This solution isn’t permanent, nor is it perfect. But it is a step in the right direction at a time when almost everyone in authority is either backpedaling or floundering against the rapidly-growing homeless crisis. Please urge your legislators to follow in New York’s footsteps by extending eviction moratoriums until all rental assistance funding has reached the families and individuals who desperately need it to keep their homes.