Officials Sweep Encampment Sweeps ‘Under the Rug’ in Fresno 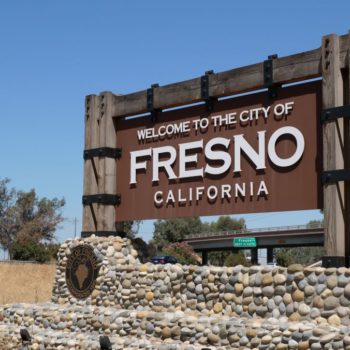 New in Fresno, Barricades and Fencing Block Reporters and the Public from Seeing What’s Happening During Encampment Sweeps

A bizarre new ordinance in the city of Fresno, California, has made the act of entering a “buffer zone” during encampment clean-up punishable by a $250 fine and misdemeanor charges.

The ordinance, proposed in January by councilmembers Miguel Arias and Luis Chavez, went into effect on March 31. If only we could get helpful laws put in place that quickly!

Speaking on the matter, Chavez has said that people are still welcome to watch or record from afar, though there is no specific guideline to say how much space each buffer zone will put between the people in the encampments and the observers on the other side.

It’s also a bit difficult to watch and record through the opaque fencing and other barriers that often delineate these buffer zones – to say nothing of being able to intervene in the case of mistreatment.

The American Civil Liberties Union of Northern California has acted quickly to have this ordinance reversed by suing the City of Fresno. Their main argument is that the ordinance prevents advocates and media from documenting how their unhoused neighbors are treated. It boils down to a violation of First Amendment rights.

Encampment sweeps like this are notorious for destroying or trashing personal belongings like clothing, food, tents, identifying documents, prescription medications, and even pets. Because of this, the ordinance includes language that protects city officials and contractors from liability for any damage or destruction they cause during the sweep. ACLU NorCal charges that the ordinance wrongly punishes people engaging in “advocacy, speech, expressive conduct, and association” during sweeps while protecting the government from liability for any wrongdoing.

Succinctly put, as in the official complaint, “Public scrutiny is essential to government accountability. This Ordinance provides the City with a potent tool to hide its misconduct away from public view and then avoid liability for any wrongdoing, thereby increasing the risk of harm to all those involved in a sweep or other abatement activity at an encampment.”

Why Is It so Important to Have Access During Encampment Sweeps?

This is an important right to different people for different reasons.

For the people who live in an encampment that’s being cleared, it’s important to have access simply because that is their home. They may need access to gather personal possessions, pets, or for any number of reasons one might need to return home.

While Fresno Councilmember Chavez assures everyone that the city gives at least one day’s notice before clearing an encampment, that’s often not enough time for that information to trickle down to everyone who needs to hear it.

So, suppose you live in an encampment set to be cleared, and you’re unable to pack up your things in time. In that case, you now have to choose between forfeiting all of your worldly possessions, whether it be clothing, documentation, medication, or a pet and entering the buffer zone at the risk of being subjected to violence, misdemeanor charges, or a fine you’ll never be able to pay.

Which option will ruin your life less?

For members of the public and activist groups, it’s crucial to witness how encampment sweeps are carried out in real-time to make sure that the people involved are treated with respect. And when they’re not, to hold the people responsible accountable for their actions.

Given the violence that often accompanies sweeps that happen in broad daylight, it’s chilling to think what might happen when no one can see what’s going on.

What Effect Can Activists Have on Active Sweeps?

The ACLU goes into a lot of detail on this point because the effect of public observation and documentation can make a huge difference.

For example, a successful class-action lawsuit against the city of Fresno seeking restitution for the city’s practice of unlawfully seizing and immediately destroying the personal property of homeless people was only successful because of evidence and documentation gathered while these sweeps were occurring. If the current ordinance had been in place before that case, it would not have been possible to gather that evidence.

Undoubtedly, the city knows this. It’s not far-fetched to think that’s precisely why they don’t want any witnesses to their behavior during sweeps.

In a more direct example, one of the plaintiffs in the case was once present at a sweep where abatement officers and city workers gathered up everyone’s belongings in large, black trash bags. All the while, they promised they wouldn’t destroy the belongings. Instead, they would store the belongings for later retrieval. However, officials did not label any of the bags despite the urging of advocates to do so. In the end, the plaintiff had to label the bags herself. Otherwise, it would be nearly impossible for anyone to reclaim their belongings later.

And it’s not just property that’s at stake here. Police officers have frequently been caught using excessive force on encampment residents during sweeps. Basic human decency is not enough of a deterrent against this behavior for many of them. However, being observed and held accountable by the public works to reduce the brutalization of unhoused people.

In one instance, advocates at an encampment sweep saved an unhoused person from being run over by a bulldozer!

Because of these and many more undocumented cases, the lawsuit asserts that the presence and intervention of public observers are valuable and necessary to protect the rights of encampment residents from being further infringed upon. Time and time again, we’ve witnessed police and other city officials failing to hold themselves to the standards of law they impose on others. We have to be the ones to stay vigilant and hold them accountable.

The mere public presence at encampment sweeps has been shown to be effective in “de-escalating conflict, compelling workers to act with greater care, and ensuring that proper procedures are followed with a reasonable amount of time given to packing up.”

In fact, it’s so effective that the city wants to do away with the practice so they can conduct their sweeps however they want. We can’t let that happen.