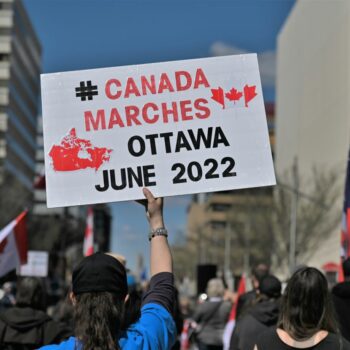 2022 has been a year filled with disruption in Ottawa, Ontario, Canada.

As tempers flared and exploded into emotional fire regarding the COVID-19 pandemic, it may have only been a matter of time before demonstrations filled streets across the country.

Protesting the ever-evolving COVID-19 regulations, a “freedom convoy” of transport truck drivers, who believed that vaccine mandates and passports had negatively impacted their livelihoods, organized a massive public demonstration in late January. With the nation’s capital as the primary target, a rolling barrage of transport truck drivers, supporters, and onlookers infiltrated the city of over a million citizens and effectively closed down their downtown.

Opinions on the legitimacy of their grievances may vary. But the right to protest is protected under the Confederation of Canada’s Charter of Rights and Freedoms. Protesting for any variety of reasons on Parliament Hill is not at all uncommon. Demonstrators regularly pack Parliament Hill to make their voices heard about important public policy issues.

In fact, this author has supported many past public demonstrations on or around Canada’s Parliament. From speaking on Parliament Hill, demanding more affordable housing options, to hosting my own large-scale protest pushing for a residential rent relief program during the first wave of COVID-19. The right to public protest is fundamental to a functioning democracy. It’s an important tool for social change.

Often, when protests happen, they are inconvenient. It often is to be expected that they would be. To effectively pressure government for changes, one should rightfully anticipate that civil disobedience may negatively impact a community.

That said, this particular occupation heeded some questionable results.

The long-standing impacts of this protest have continued for well over seven months. Despite vaccine mandates for import and export transportation companies most often being in the jurisdiction of provincial governments and not the Government of Canada, the “Freedom Convoy” was still a successful fundraising tool that garnered much public interest.

However, some of the most vulnerable and the agencies that serve them continue to be impacted by a long-term occupation by unwelcome guests who may have overstated their strife while overlooking the ongoing plight of others.

Shepherds of Good Hope Executive Director Deirdre Freiheit said, “the rally against COVID-19 restrictions and the Liberal government roiling the capital’s downtown has disrupted social services and blocked road access to their shelter.”

Freiheit continued explaining that “several protesters showed up at the soup kitchen on Saturday (January 29th, 2022) and allegedly verbally abused staff and volunteers while demanding they be served.”

The situation boiled over rapidly, with convoy participants and supporters targeting the shelter staff with unwarranted aggression when the staff was initially reluctant to engage.

According to the Shepherds of Good Hope website, the organization’s soup kitchen program has served “over 350,000 meals, including breakfast and dinner for clients” in their emergency shelter, a public community lunch, and an evening drop-in program. Doing so is no small task on finite resources. And while the organization has a reputation for never turning people away, its services target Ottawa’s most vulnerable, hungry, and unhoused.

The program was never designed to provide meals for transport truck drivers and their families and friends who drove to Ottawa by choice as an act of protest.

In a tweeted press statement, the Shepherds of Good Hope CEO further explained that “when a security guard (who is a member of a visible minority) went to help the individual, they had racist abuse hurled at them.”

Friends, it’s been a difficult 24 hours. Staff harassed for meals. A service user and security guard assaulted. Through it all, you have donated and filled our hearts with gratitude. Every cent will support people experiencing homelessness. Thank you. See our statement ?? pic.twitter.com/TYHD8r8aLo

The organization made the tough decision to feed the protestors to keep the peace, which risked negatively impacting their ability to provide much-needed services moving forward that weekend. Convoy protestors would later infer through a public statement that the Shepherds of Good Hope were “happy to feed protestors” as a possible insinuation that they signaled support for the occupation.

A public statement from the soup kitchen and shelter program would follow to clarify misinformation.

The statement reads, “it’s been an incredibly difficult weekend for our downtown shelter and soup kitchen programs. Our staff and volunteers faced significant barriers to get into work. The only volunteer to make it in parked far away and walked.”

The statement continued, “Trucks were parked in our ambulance drop-off zone for nearly 12 hours until they were removed and towed with the support of Ottawa Police Services. The incessant honking and noise from trucks caused significant anxiety and distress to our staff and shelter residents. The Salvation Army Outreach van was not able to run in the downtown core. All shelters in the sector had to figure out contingency plans for client transportation.”

The Ottawa Citizen reported that “for much of the day Saturday, access to Shepherds, at the corner of Murray Street and King Edward Avenue, was blocked by unattended protest trucks that were left running.”

Reeling from frustration, the official company statement did not mince words when highlighting the harassment and abuse that staff and clients were subject to:

“Staff and volunteers at our soup kitchen experienced verbal harassment and pressure from protestors seeking meals. While we are not certain of the exact numbers, the demands for meals and verbal altercations continued for several hours over the dinner period. One member of our shelter community was assaulted by protestors. A security guard went to his aid and was threatened and called racial slurs.”

This was one of the multiple examples of harassment and violence prevalent throughout the occupation. And even now, the unrest continues.

The “Freedom Convoy” occupied Ottawa for much of February. A second convoy of protestors arrived in April under the banner “Rolling Thunder.”

Protests against vaccine policies and government COVID actions continued on Canada Day, July 1st. And as recently as July 24th, a fourth version of the protest arrived in Ottawa, resulting in “Police in Ottawa handed out 103 tickets and towed 12 vehicles during a day of ‘protests and convoys.’”

With civic buildings and monuments damaged, roads blocked for emergency access, and confederate flags flying high, to say that these protests were controversial would be an understatement. The overwhelming negativity of these demonstrations has also caught the international community’s eyes.

As news continues to spread about the barriers these protests have created for organizations like Shepherds of Good Hope, citizens nationwide are helping fill the voids and amplify their support for the organization and its mandate.

As reported by CBC news, the Ottawa shelter was “blown away” by $750,000 in donations, some from as far away as Australia, in the weeks following the original harassment.

“When we got the final tally, we were just incredibly blown away,” Communications Manager Caroline Cox said. “I think we’re in a bit of a state of shock.”

While the generous donations provided a cushion for the organization, staff had to face harassment, and a homeless person was assaulted. While the current outcome seems promising, this story is far from over, and the disconnect is still being felt.