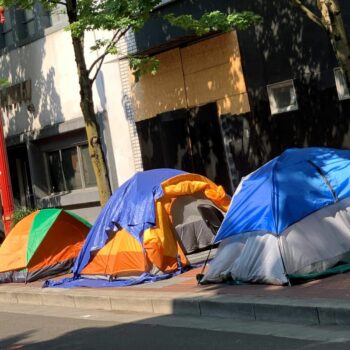 While the measure has broad support from businesses, realtors, and neighbors, it has been challenged by advocates for failing to include any input from people experiencing homelessness. There is also no set funding for the project, and the ACLU has noted that the ban will face legal challenges.

The legislation, initially proposed by Portland Mayor Ted Wheeler and Commissioner Dan Ryan, calls for six camping sites, each limited to a maximum of 250 residents, to be opened within 18 months of securing funding. Once the camps are open, the city will start enforcing the ban with street sweeps.

Those who refuse to comply will be subject to criminal penalties. However, those penalties can be mitigated through a diversion program created in cooperation with the Multnomah County District Attorney’s Office.

In addition to the camping sites, the legislation calls for the construction of 20,000 affordable housing units by 2033. The city will partner with a local nonprofit to create jobs.

Only City Commissioner Jo Ann Hardesty voted against the proposal, calling it “cruel and inhumane.”

“Saying we will magically wave a wand in 18 months and there will be no more street camping is not real,” she said. “These resolutions contain no code changes, identify no funding or land, and have no agreements between jurisdictional partners.”

But proponents of the plan said they’re not looking to demonize people experiencing homelessness.

Tiana Tozer is the lead plaintiff in a suit filed against the city last month arguing tents blocking access on sidewalks constitute a violation of the Americans with Disabilities Act. She said the measure is the best option available to address a terrible situation.

“It’s not okay to criminalize homelessness, but neither is it okay to trap people with disabilities in their homes,” she said. “We, your constituents with disabilities, are here today to ask for you to provide the access that is our right under the ADA.”

Additionally, a survey commissioned by the Portland Business Alliance found that most respondents approved of the camping ban.

Respondents were asked to choose between the following two statements:

Only 14 percent agreed with the latter, and 79 percent with the former.

When the question was worded differently, the numbers varied somewhat:

This time, 64 percent of people agreed with the first statement, and 26 percent with the second.

When explicitly asked about the proposal from Wheeler and Ryan, 79 percent supported it, while 18 percent opposed it.

While the survey offered a glimpse into the public’s thoughts on the plan, residents didn’t actually get a chance to voice their opinions until a seven-hour public hearing on Oct. 27. The hearing showed a much more divided Portland.

Business owners and realtors went to the head of the line thanks to an invitation from Commissioner Dan Ryan, head of the city’s housing bureau and Joint Office of Homeless Services, who asked that those in favor of the plan be allowed to speak first. Ryan did not publicize that fact, making many question the legitimacy of the hearing.

“This has not been an equitable, democratic process—dangerously so for people experiencing homelessness,” said Kaia Sand, the executive director of Street Roots, a homeless advocacy organization in Portland. “Money seems to buy access.”

Cost, Legal Challenges Could Tank Ban Before It Can Go into Effect

The hearing was noted in a release from the Oregon chapter of the ACLU, which called Ryan’s move discriminatory.

“Money and political opinion should not determine your place in line to talk to elected officials,” Legal Director Kelly Simon wrote. “The council should pause until it can create an unbiased forum that intentionally considers accommodating those who were harmed by last week’s deprioritization.”

Simon also pointed out that Portland’s ban is very likely unconstitutional, violating the landmark 2018 Martin v Boise decision that states that punishing unhoused people for sleeping outside on public property in the absence of alternative shelter is unconstitutional.

“No matter how popular criminalizing homelessness might become, it does not render it lawful,” Simon wrote.

Assuming the law survives a legal challenge, Portland still has to find funding for it.

The city’s budget office said the proposed encampment sites could cost up to $6.8 million annually—and that estimate was for three camps with a maximum of 150 people each. The affordable housing proposal, meanwhile, could cost close to $10 billion.

The legislation requires the city to ask the state legislature, the county, the Metro regional government, and other jurisdictions for funding to make it work. So far, none have agreed to do so.

It’s a tiny beacon for Portland’s unsheltered homeless, who had no input into the proposal despite waiting hours to speak at the Oct. 27 hearing. Many expressed concerns about safety in the mass encampments, citing fears of transphobia, homophobia, harassment, and violence, as well as concerns about bringing children into the camps.

Suggestions that the council investigate options that have proven successful in other communities—tiny home villages, supportive housing programs, and street outreach from service providers—went unheeded.

It was incredibly frustrating for those who attended the hearing, who were once again marginalized when it was their interests supposedly being discussed.

“It would be great if you could maybe bring some people to the table who are actually living in homelessness and ask us what we want, what we need, and do something with that,” said Becky Lange, one of the speakers at the hearing. “The problem is, you’re constantly infantilizing the homeless, and you’re telling us what to do, where to go.”

Americans fear for their safety now more than ever. A recent Gallup poll showed fifty-six percent of Americans, which is a record high, believe local crime has risen in their area this year. Seventy-eight percent...

The idea of “one size fits all” might apply to some things in life. But when dealing with homeless people, it’s not a suitable approach. There is no one way to be homeless and no one way to solve it. Just as each person...

The National Alliance to End Homelessness today expressed its encouragement by the announcement that veteran homelessness has been reduced by 11 percent since 2020. The announcement from the U.S. Department of Veteran...

What Did We Learn about Family Homelessness from the Recent AHAR Report?

Here’s What to Do If You’re Facing Eviction

Reimagining Conferences, Uplifting Voices: What Equity Work is About