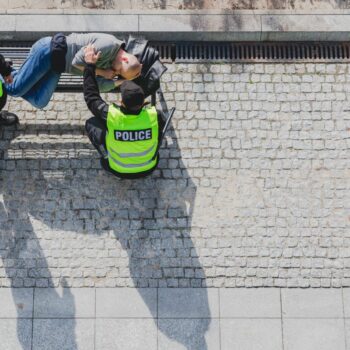 The Cicero Institute Is Lobbying States to Abandon Housing First Initiatives and Instead Adopt the ‘Reducing Street Homelessness Act’, Which Criminalizes Homelessness

In a way, the prison industrial complex is the mother of all NIMBYs. They truly take the philosophy to the extreme. Not only do they want certain people not in their backyards, they want them to be entirely sequestered away from society in an inhumane but profitable cage.

Given this connection, it should be no surprise when I tell you that the private prison industry is the single most powerful force pushing for homeless criminalization laws nationwide.

It’s not hard to see why the owners of private prisons have taken an interest in this issue. By simple math, the more people they can lock away in their legalized little torture chambers, the more money they make. And the money is all that they care about.

They targeted the unhoused population for the same reason everyone else does – they are highly vulnerable and heavily stigmatized. If they had started a campaign to lock up soccer moms who forget to bring orange slices, it would have gone nowhere. But it’s easy to convince people that the person on the street corner they’re already suspicious of due to bias should be arrested for the lesser offense of simply existing.

Homeless criminalization laws also rely on the racism that has been built into the American justice system since its inception, since 40% of unhoused people in America are Black. This is just another one of many methods we use to disproportionately imprison Black people and other people of color in this country.

The people and institutions behind the push for widespread homeless criminalization laws would prefer you to believe that we’re seeing waves of identical rhetoric all across the country simply because the people are finally speaking out and finally voicing the opinions they’ve always had.

But that’s not the case. “The people” are reading off of the same cue cards.

The real voice behind these voices is The Cicero Institute, a conservative think tank founded by billionaire Joe Lonsdale. He is significantly invested in the private prison industry through his venture capital firm, 8VC.

The Cicero Institute has dedicated a ton of its time and money toward countering the Housing First method, which is about as strong a testament to its effectiveness as you can get. They’ve even partnered with PragerU to produce emotion-driven, facts-light “documentaries” on Youtube.

Why are they trying desperately to get states to abandon the Housing First method? Because it works. Housing First keeps people off the streets and out of prison, which means fewer profits for billionaires like Lonsdale.

What Is The Cicero Institute Lobbying For?

Influencing public opinion is just one arm of The Cicero Institute’s approach to expanding the criminalization of homelessness. The stronger arm is their lobbying arm. If you’re not familiar with how lobbying works in this country, here’s a quick and depressing primer on the topic.

Lobbyists from The Cicero Institute are currently pressuring lawmakers in states around the country to adopt laws that sacrifice their citizens at the altar of prison profits. Many states have shamefully taken the deal already, including Texas, Missouri, and Tennessee, with more on the horizon.

Lobbyists from Cicero call their proposal the “Reducing Street Homelessness Act” because, of course, they do. It includes specific language designed to turn anyone sleeping in public into a criminal – at law enforcement’s discretion, which means enforcement will be uneven. It also proposes that states divert funding for permanent housing solutions into temporary encampment projects, a phenomenon we see all over and I’ve written about before.

The proposal would also force unhoused people with mental illnesses into either prison or prison-like mental health facilities. Again, it would be the police, with little to no psychological training, deciding who is and is not mentally ill.

But the most insidious part of all this is that it prevents even experienced advocates and social service providers from providing meaningful assistance due to the constantly looming threat of arrest any time an unhoused person interacts with the system.

If you’re wondering how all of this looks to people in other countries who don’t even allow for-profit prisons, it’s not good. But that also means there’s hope for a better way. We have plenty of systems to model ourselves after once we’re ready to make significant changes.

Significant changes in this area are necessary. This system of criminalizing homelessness has been condemned twice by the United Nations Committee on the Elimination of Racial Discrimination. Using its strongest language, the Committee recommends that we:

They’ve given us the path to move forward. Now we just have to convince our lawmakers to take it.

What Can I Do?

Take a moment to mourn the fact that we’re living in a capitalist hellscape that routinely values corporate profits over human lives. I know I needed one after reading that article about lobbying.

Then, when you’re ready, start writing to your legislators. It may feel impossible to drown out lobbyists’ undue influence over our lawmakers, but we have to at least try.

Once you’ve done that, look around your local area to see if there is an existing community aid network. Banding together as a community can be a hands-on way to combat poverty and homelessness on an individual level, taking some of the sting out of feeling unheard by the government officials who allegedly represent you. Finding the right balance of big picture to local work can help keep activism sustainable for the long haul.

School Districts Seek Solutions to Help Educators Find Affordable Housing In New Mexico, teachers are leaving jobs they love after just a year because they can’t pay for housing. In California, districts are asking...