Repeat Victims: Another Reason Sweeps are not the Answer 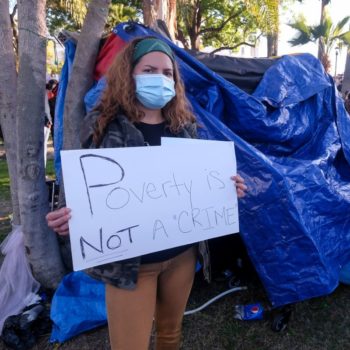 Homeless encampment sweeps have a bad name for a good reason. They are proven to be ineffective, expensive, and downright cruel. Thanks to a new study conducted across the Big Apple, we can add another reason to the list: repeat victims.

What Are Encampment Sweeps?

If you’re not familiar with the terminology, homeless encampment sweeps give a clean name to the dirty practice of clearing tent cities by any means. Instead of providing long-term solutions to the homeless crisis, this practice removes all evidence of poverty.

Encampment sweeps are often conducted under the watchful eyes and active fists of law enforcement officials. They are the act of forcibly removing homeless individuals (as well as their belongings) from public spaces. These take place legally, thanks to an uptick in anti-vagrancy laws. What is an anti-vagrancy law, you ask? These laws make it illegal for unhoused members of society to engage in everyday life-sustaining activities like walking, standing, sitting, and, of course, sleeping in makeshift shelters on public grounds.

Effectively, these laws make poverty a crime. They also do it in an obscure and deceptive manner.

The way these sweeps work is simple.

Members of encampments are given a small window of time to relocate from their current living situation, which is often an encampment or tent city. Their failure to do so can result in them incurring criminal charges. This further restricts their freedoms while making it more difficult for them to obtain housing in the future.

Even compliance comes with an onslaught of issues that exacerbate homelessness. For example, tent city residents’ belongings are almost always tossed in the trash during these excursions. This means that homeless people lose personal, important, and even life-saving possessions like prescription medication, medical identification cards, and photo identification. If a homeless person is on a waiting list for housing and goes to jail, they have to start that wait all over again from the back of the line.

Sweeps also subject unhoused people to the prospect of police brutality, further wedging a gap between them and authority figures and sowing the seeds of distrust.

It is a ruse to simply move encampment residents around like dust on the proverbial kitchen floor of the nation. Sweeps make it appear as if the problem has been eliminated when it has actually been temporarily pushed across the street.

The deceptive ruse is expensive, costing cities all across the nation millions of dollars to keep up the act. Still, the people who pay the ultimate price are encampment residents themselves. Many lose their lives when robbed of life-saving prescription medications. Others lose their freedoms when they go to jail simply for surviving.

Housing advocates already knew this, but a 2022 study reveals yet another ugly truth about homeless encampment sweeps.

A study conducted by NYC activist organization the Safety Net Project of the Urban Justice Center yielded shocking results exclusively revealed to Big Apple-based website Gothamist. That study shows a trend of repeat sweeps. One particular section of the city targeted (a 15-block stretch) saw a jaw-dropping 60 sweeps between January and May.

Repeat sweeps suggest repeat victims, although the data covers regions rather than individual plights. The data shows sweeps conducted on the same blocks and at the same notorious addresses repeatedly was not uncommon. Some singular addresses exhibited as many as 11 sweeps in a row in just under five months.

While small and novel, this study is a true testament to the infectivity of such endeavors. If the sweeps were even modestly effective, it would not be necessary to revisit the same addresses and, subsequently, the same homeless New Yorkers this frequently.

The data reveals that under Mayor Adams’ watch, 726 sweeps have already cost the city 660 hours of paid municipal employee time. And with at least 447 separate interactions with various homeless people through these sweeps, you’d expect more people to be permanently housed. However, the Gothamist reports that only 39 people have been placed into any housing, including a shelter, which is a temporary refuge by the most optimistic of definitions.

Social worker Craig Hughes points out that this proves a marginal 5% “success” rate for sweeps. This is generous because it assumes that placement into an emergency shelter is a success in and of itself. In reality, only a small minority of homeless shelter residents exit into permanent supportive housing. By these standards, entrance into an emergency shelter is less of a victory and more of a delayed defeat.

Ultimately the vicious cycle continues as the broom handle of legislative injustice sweeps back and forth across the nation. Something has to change.

The United States government has deceptively displayed the homeless crisis as much more complicated than it is. It does not take hundreds of man-hours, millions of dollars, and countless citations to rid the streets of these encampments.

No matter what side of the fence you are on, it’s clear that we really need housing. And not just the existence of housing. More importantly, we also need the right to housing regardless of status in America. Contact your legislators today and demand more affordable housing.