Roe Will Hurt Those Who Already Face the Most Systematic Discrimination 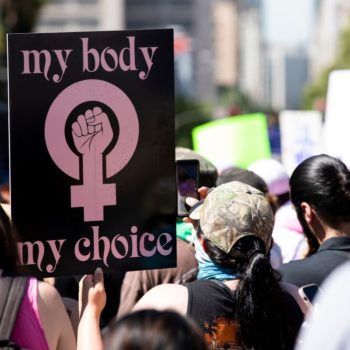 We can all agree that family planning, having or not having children (and getting an abortion) are all highly personal choices. That choice is probably one of the most important, challenging, and scary choices we will make in our lives. That choice and process, no matter what happens, change our lives and the lives of everyone around us.

Before I became homeless in 2017, I suffered a miscarriage. I think about this miscarriage as the beginning of the darkest time of my life. I was already under a tremendous amount of stress. However, it wasn’t until I was fighting tooth and nail in housing court over a rent overcharge, a hole in my living room wall, and broken pipes that I learned I was pregnant.

I was fighting against a notorious Manhattan slumlord that was hellbent on making several families homeless, many of who had lived in that neighborhood for decades.

Upper Manhattan, Harlem, and up toward Washington Heights was quickly becoming a hot spot. He knew he could rent these units for twice as much to wealthier, white folks, who suddenly found the neighborhood “booming with culture.”

He pulled our lease renewal last minute and doubled our rent. We refused to pay the rent overcharge, so we went to court. When his lawyers didn’t scare us away quick enough, he had contractors take a sledgehammer through our wall. He had the superintendent turn off our heat and water. It was not long before I lost the baby.

Although I didn’t have that child, I often wonder what my life would be like today if that child had been born. Would the trauma of eviction and homelessness, of living in a crowded women’s shelter, pregnant and alone, have changed my life for the worst? I wonder if formerly diagnosed borderline personality disorder quietly mixed into new trauma, making way for clinical depression and suicidal thoughts, would have killed me. I wonder if I’d be housed today, if I’d still have that child or if I’d lose that child to social services. How would that child have impacted my life and the lives of everyone around me? How would I, and everything else happening in my life, have impacted that child’s life?

Pregnant with No Place to Go

One evening, while I was walking through beeping metal detectors, awaiting my turn to sign for my shelter bed, I saw a young pregnant woman crying at the front desk. I later spoke to her in the elevator. She told me her parents kicked her out for getting pregnant (for having premarital sex) and that her partner had left her. She was alone, with no money or a place to go. Now she walked into one of the worst, most crowded homeless shelters in New York City.

This suffering consumed our entire existence. That is what I imagine hell is like, just that, but never-ending. It’s hard to believe, when you get there, that it will ever end. Soon you’ll hear that the others in the shelter had been for three years, five years, seven years. You count on your fingers and wonder how old you’ll be by then. 33, I thought once. I’d be 33. Imagine giving birth to a child in hell, and they are spending the first seven years of life there.

On June 24, 2022, the U.S. Supreme Court overturned Roe v. Wade – erasing the Constitutional right to an abortion. This will leave people without access to abortion services in 26 states.

However, laws like this always harm those who already face systematic discrimination. This will impact those homeless or living in extreme poverty more than anyone else. These laws harm black and brown people, disabled people, undocumented people, and LGBTQ people at significantly higher rates.

In fact, according to True Colors United:

“When an individual seeks abortion services but is denied, they are three times more likely to fall into poverty than someone who can get an abortion.”

The risk is so much more than that. The LGBTQ community experiences poverty at higher rates than non-LGBTQ people.

According to a report from the Guttmacher Institute, low-income women have higher rates of unplanned pregnancy and abortion. They are also less likely to have access to health insurance or health care – such as birth control.

Across the board, when compared to white people, Black and Indigenous people and People of Color (BIPOC) are less likely to have health insurance and often have less access to contraception and reproductive care.

Lastly, a report from Voices of Youth Count and Chapin Hill at the University of Chicago shows that 44% of young women experiencing homelessness reported being pregnant or a parent.

Seeing that nearly half of all young women experiencing homelessness reported being pregnant, I think back to that young woman, crying at the front desk of the homeless shelter, recently abandoned by everyone and everything she knows and loves, with nowhere to go. She was probably experiencing the most terrifying event in her life. And it’s more than just simple access to abortion. It’s believing that everyone, regardless of any reason at all or who they are, deserves autonomy over their own bodies and lives. They shouldn’t have these enormous barriers in the way of that.