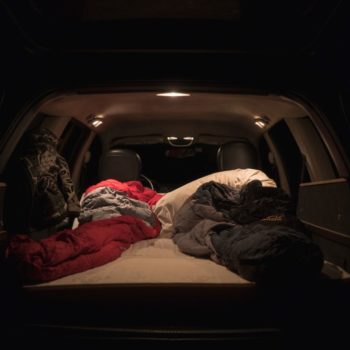 Halima became homeless after her mom passed away during the pandemic and her landlord more than doubled her rent to $4,200 per month.

She lived in several places around Los Angeles afterward, but each situation seemed to worsen. So, she used her pandemic stimulus money to buy an RV to give herself a little peace of mind.

Unfortunately, Halima says her life has been anything but peaceful ever since.

Outside of maintaining her vehicle with new parts and gasoline, Halima has also been robbed multiple times by people she’s helped. She also lost a parking spot because the people hosting her were on drugs and harassed Halima for attention and sex. There were others that Halima encountered who she said chose to live a life of crime by stealing people’s packages for fun.

“Altogether, living in a van is much more than I anticipated,” Halima told Invisible People.

Halima is one of the thousands of Americans forced into homelessness during the pandemic. While some ended up in emergency shelters and rapid-rehousing programs, many were forced to live in their vehicles as the demand for non-congregate shelter dramatically increased.

Known as mobile homelessness, people who live in their cars are often counted among those experiencing unsheltered homelessness because vehicles are not designed for regular sleep accommodation, according to the Department of Housing and Urban Development (HUD).

Cities from Washington State to New York have increased their piloting of Safe Parking Program initiatives during the pandemic. These initiatives provide a legal place to park that are often equipped with hygiene stations, laundry facilities, and shower services. Many are modeled after Santa Barbara, California’s safe parking program, which opened in 2004.

But despite the pandemic’s continued wane, the demand for safe parking programs has increased. This has led many cities and nonprofit entities to launch their own programs in hopes of stemming an increase in homelessness.

“While the end goal is permanent housing, temporary solutions like safe parking areas provide safety and connections to human and social services,” said Lisa Pool of the Municipal Research and Services Center.

A Necessary Vehicle for Services

To service providers, safe parking programs have become a necessary vehicle for connecting people experiencing homelessness with services and supportive housing options. But some have faced challenges such as political pushback and uncertainties surrounding funding sources.

“People living in their cars have expressed their gratitude for having a place to sleep every night without worry of harassment or safety,” Scow said. “Local law enforcement refer people they come across who are staying in their cars, as we are the only safe parking program in the area and possibly the state.”

Despite the program’s myriad successes, Scow adds that WWGP has struggled to maintain stable funding sources for its safe parking lot. In response, Scow and another team member, Beverly John, started a GoFundMe page to help keep the lot open.

In the summer, Scow said as many as 30 people stay at the safe parking lot. During the winter, that number drops to between five and six. But that doesn’t mean the need for additional services decreases, Scow said. In fact, she said the cold months often bring the people who need help the most to the safe parking site.

“We believe that we address a critical gap of the hidden homeless,” Scow said. “We are not a homeless shelter. Automobiles are considered uninhabitable, and our high numbers are in the summer months. Yet the low numbers who use the lot during the winter months depend on it even more. They have no other options.”

Targeted Use of Federal Relief Funds

Other cities like Denver dedicate funds received under the federal American Rescue Plan Act to launch safe parking programs. Denver opened a request for proposals at the end of February to operate a safe parking site. The city is dedicating more than $150,000 of ARPA funds to launch the program.

The report used a different methodology than the previous Point in Time Counts. Instead of relying solely on volunteers, the report also included data from Medicaid and the number of homeless students identified by local schools as homeless under the McKinney Vento Act.

“We will continue to leverage every tool available to help our unhoused neighbors exit homelessness as quickly as possible,” Denver Mayor Michael Hancock said. “Together with other investments like Safe Outdoor Spaces and tiny homes, safe parking can play an important role in reducing the harms of unsheltered homelessness while bridging individuals to housing solutions.”

Other cities like Arcata, California, are taking a similar approach.

At the end of January, Arcata’s city council approved more than $600,000 to fund a safe parking program for the city’s more than 300 people sleeping in their vehicles.

The Arcata House Partnership (AHP) will be responsible for managing the site, including providing staffing and referring guests to additional services, if necessary. The site will be open for one year and can accommodate up to 30 vehicles for overnight and extended stays.

“We’re certainly going to be looking to the community, to the population that we serve, to give us some guidance on the best way to help people prepare for and then be successful in this program,” said Darlene Spoor, AHP’s executive director.

Safe parking programs in some cities have been met with pushback from residents who are concerned about trash and crime.

For example, residents fought back against an ordinance approved by Fremont, California’s city council, that allows faith-based organizations to operate safe parking programs on their campuses for one month at a time.

So far, only four churches have signed up for the program. But some residents say the programs are rife for abuse.

“When the word gets around that there’s a place that people can go, other people will follow,” one resident said. “This is a residential area. What’s going to stop people from pitching tents in the parking lot?”

Other residents distributed a flyer around the Parkmont neighborhood that disparaged the safe parking program that Christ the King Lutheran Church plans to open in either May or June.

“Let them know that this is our neighborhood, and we don’t want a homeless parking program,” the flyer read.

To program operators like Scow and John, safe parking sites are often the only shelter option for people who stay there. Without them, overall homelessness could increase as millions still face the threat of eviction.

“Some stay a few nights until they can find other shelter options,” John said. “Others have been staying on the lot since it began because homeless shelters are not an option for them for various reasons and everything in between. But no matter the reason, we connect willing vehicle residents to sustainable housing resources that many have not previously accessed.”

The pandemic proved that we need to rethink housing in the U.S. It also showed that creative programs like Safe Outdoor Spaces and Safe Parking Sites could address many of the underlying causes of homelessness and help people get back on their feet more quickly.

Contact your representatives and tell them you support bolstering Safe Parking programs. These programs have proven effective at helping people find additional services and stable housing, which are the first steps to ending homelessness.