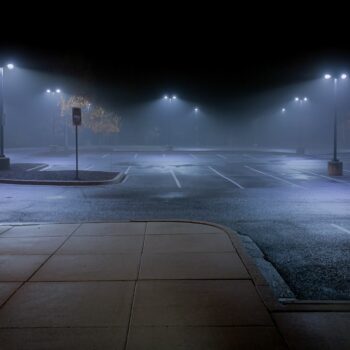 The other night, I had a very upsetting experience. It was raining finally, after a long summer of no rain but high humidity. I grabbed my umbrella and went from the van to the grocery store.

My personal scooter isn’t supposed to get wet. The motor is in the back wheel, and you aren’t supposed to go through rain and puddles with it. No problem. It was later in the evening, and the rain kept crowds away. So I had faith in getting a store scooter. I entered the store, closed my umbrella, tossed it into the scooter basket, and then proceeded to get on the scooter. The scooter was parked at an odd angle, and the charging cord was in a weird place. The seat was also wet. I decided to use the scooter facing it, which was dry and more easily accessible.

It wasn’t until a while later that I realized, to my horror, that my umbrella was not in the basket. I checked the lobby to see if it was in the basket of the other scooter, and I spoke to the manager. I even called the store the next day. Nothing. It was gone.

Now, you’re probably thinking, “What’s the big deal? It’s just an umbrella. Get another one at Walmart. They’re cheap”.

The problem is this was a gift from a now deceased friend. It was an expensive, designer-label umbrella: very attractive, sturdy, yet compact. I loved the umbrella for its virtues, but it also had deep sentimental value. I have had that umbrella since 2003. So, for nearly 20 years, I managed never to lose it. I felt my heart break.

When you are poor, having nice stuff, like a sturdy, designer-label umbrella, is a real treat. This wasn’t some cheap “Walmart umbrella.” This umbrella came from Macy’s on 34th street in Manhattan, where my friend bought many of his clothing and accessories. So, of course, I feel heartbroken that it’s gone and angry at who has taken it.

Some might say, “Finders, keepers” is the rule. Still, that schoolyard expression is the philosophy of the immature, the unsophisticated, and to a great extent, at the core of everything wrong with this world – a total lack of compassion.

I was raised not to take what isn’t mine. Had I found someone’s umbrella, I’d have immediately turned it into the manager to place in the lost-and-found. Never would I have just stolen it. I would have imagined that whoever lost it might have realized it was missing before long and checked with the manager to see if someone had turned it in. I would put myself in the shoes of the other and would have chosen the right action – a term often heard in discussions in Buddhism when talking about intent.

To do the right thing is to choose the right action; in this case, it is the way that someone could have alleviated my suffering instead of creating it.

By simply returning the found umbrella, I would have been so relieved. The nearly 20-year-old gift would be safe and sound back in my van.

Instead, someone chose the wrong action. They chose to be selfish and heartless, to create suffering. Or worse, and just as likely, they did not think at all. I have observed that many people operate on auto-pilot. If they see an umbrella in a cart, they take it with almost no thought about the consequences of their actions.

I returned to the van feeling horrible, thinking a lot about what had happened. Exhausted, distracted, and stressed, I was not used to carrying an umbrella after months of no rain. I usually do not lose my things (if you haven’t guessed by the fact that I managed to keep my umbrella for nearly 20 years without losing it).

I thought about things that people have said to me about the umbrella. Things like, “No one really owns an umbrella,” which certainly feels true on some big, cosmic level. Or “It’s just a thing, it’s not your friend. You still have your memories of him”. Yes, I do. But when I held the umbrella and used it, I felt a connection to him that my mind alone doesn’t conjure.

I am a very tactile person living in a three-dimensional reality. Maybe it’s just my brand of autism. But I like touching and feeling objects as a way of connection or comfort to the person who gave them to me. My deceased adoptive father’s robe is such an object. It gives me comfort.

When you are homeless, you must cling to any scrap of normalcy. It’s not easy.

Many people lose all of their belongings when they become homeless. Or if they didn’t start that way, they might end up that way. I am facing increasingly more risk of losing everything.

Though gas prices went down to a lower price in recent weeks, they are predicted to begin inching back up. I had heard that gas was lowered to encourage travel and vacations this summer to help the tourism industry, which has been suffering since Covid. Now that people are back to relying on their vehicles for school and work, it’s time for the ultra-high prices to return and the gouging to resume.

Running my van for air conditioning is vital to my survival due to multiple sclerosis-related heat intolerance. Even with extra help, I am broke by the middle of the month. The cost of gas, insurance, and vehicle repairs makes living in a vehicle costly. What happens when you end up in a vehicle because you can’t afford a place to live, and then they price you out of your vehicle? That’s the current trajectory of my life.

All of this comes down to greed and selfishness. If they figure out how to charge us for sunlight, that will be next. The poverty-stricken masses who cannot think past their suffering will just let that pile onto all the other back-breaking burdens.

My umbrella being stolen is symbolic of everything wrong with this planet and why I don’t belong here. Nothing will ever improve or get fixed. It’s a broken system that will stay that way because it benefits the haves and helps eliminate more and more of us have-nots.

It’s a broken system in a cruel and malevolent world.