Study: Low-Income Voters Were a Key Coalition During the 2020 Election 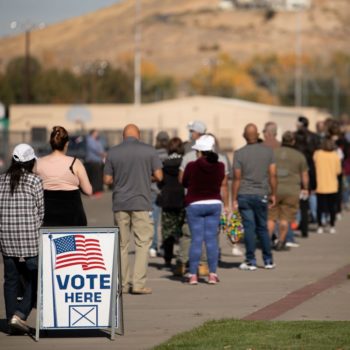 An analysis of voter data from the Poor People’s Campaign (PPC) shows that low-income voters were a critical coalition during the 2020 election.

The study, titled “Waking the Sleeping Giant: Low-Income Voters and the 2020 Elections”, found that more than 59 million people voted with an annual income of less than $50,000. That was one of the highest turnouts for that income level in U.S. history, the report says.

For example, voter engagement in Georgia encouraged more than 39,000 people who did not vote in the 2016 election to vote in 2020. While the report does not conclude that increased engagement was the sole motivating factor, it depicts the impact that low-income voters can have during an election cycle.

According to the study, low-income voters made up at least 20 percent of the voting populace in 45 states and Washington, D.C. In battleground states like Arizona, Georgia, Michigan, and Nevada, these voters comprised up to 45 percent of voters.

Low-income voters were especially impactful in states where President Joe Biden’s margin of victory was less than three percent. For example, nearly 40 percent of the people who voted in Arizona and Wisconsin had an average annual income of less than $50,000.

However, some states that saw a large turnout of low-income voters are actively making it more difficult for people to vote.

In Georgia, lawmakers passed a bill that outlaws providing food and water to voters who must wait in long lines. It also allows lawmakers to intervene in an election that they believe is “fraudulent,” regardless of whether they provide sufficient evidence to back up that claim. The PPC found that low-income voters made up more than 37 percent of those who voted in Georgia in 2020.

Republicans in Pennsylvania are trying to pass a similar bill after Governor Tom Wolf said he is open to changing the state’s voter identification laws. Low-income voters made up more than 34 percent of Pennsylvania’s voting populace in 2020.

Shailly Gupta Barnes, policy director for the PPC, said these circumstances show it is imperative for lawmakers to protect the existing rights of low-income voters and work to expand voting rights nationwide.

“To turn the opportunity to vote into a reality for low-income voters will require expanded efforts to increase both their registration and turnout on Election Day, such as automatic voter registration, same-day registration, no-excuse mail-in voting, early voting, more polling stations, and extended and longer voting hours,” Barnes said.

For people experiencing homelessness, expanding voting rights can have a life-altering impact.

To that end, some states like California have been working diligently to help people experiencing homelessness cast their votes. For example, California doesn’t require voters to have a traditional home address. Voters can register using a shelter address or cross-street address. Those who wish to mail their ballots can also use the address of a local church or service organization.

The PPC suggests that local organizations diligently engage with these voters ahead of the 2022 primary election. Last year, PPC led a voter drive that engaged with more than 2.1 million voters across the country, the report says.

“The drive had a statistically significant impact in drawing eligible LIV into the active voting electorate, showing that intentional efforts to engage these voters—around an agenda that includes living wages, health care, strong anti-poverty programs, voting rights, and policies that fully address injustices of systemic racism, poverty, ecological devastation, and the war economy—can be effective across state borders and racial lines,” the report says.

The significance of low-income voters is about more than winning an election. It is about providing dignity and protecting the democratic rights of those who are less fortunate than others. PPC describes these voters as “the sleeping giant” that still operates on the political fray and must be “pulled into political action” because it holds “the potential for us to realize the nation we have yet to be.”

There are several ways you can help protect voting rights for people experiencing homelessness. They include: