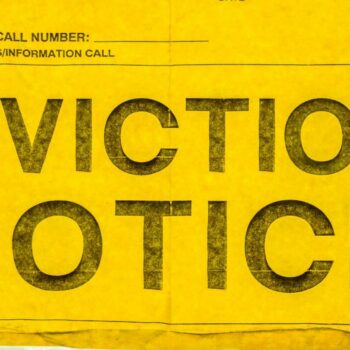 When tenants know more about the legal proceedings surrounding the eviction process, they’re more likely to remain housed, according to a new study.

Many tenants are unfamiliar with the legal proceedings involved with an eviction, which puts them at a distinct disadvantage.

“During the legal eviction process, tenants tend to lack procedural knowledge about how courts operate and how to argue their case,” the study reports. “Uneven access to this information tends to result in less favorable outcomes for tenants.”

Court-ordered evictions are entered into a renter’s financial record, which is noted in every background and credit check run before a loan is approved or home is rented. This can have a devastating effect on future housing opportunities.

“Legal evictions, therefore, severely limit future housing and borrowing opportunities, functioning as a mechanism that allows for the ‘reproduction of urban poverty,’” the study notes.

Statistically, it’s more likely that a judge will rule in the landlord’s favor in eviction cases due to several factors. Many tenants fail to show up to court, resulting in a default judgment in favor of the landlord. Additionally, tenants often do not have an attorney.

In civil matters, the constitution doesn’t guarantee the right to a lawyer, and many tenants facing eviction can’t afford one. However, they tend to have a more favorable outcome when they do have legal representation. Attorneys’ procedural knowledge allows them to “refram[e] their [clients’] housing troubles from a relational experience into a formal civil procedure.”

Without an attorney, tenants often can’t navigate this process. Meanwhile, landlords or property management groups, who are much more familiar with the procedure, can put the tenants at a disadvantage.

So, does providing more procedural knowledge—essentially evening the playing field—reduce eviction rates? That’s the premise of the study.

The TEENS program was created by JPNSI, a New Orleans-based housing justice organization, in response to the high rate of evictions. One in every 19 renter households in New Orleans faces a court-ordered eviction. Black, low-income, and female-headed households are most impacted. Some clients also complained that eviction notices were not properly posted.

Program volunteers contacted as many tenants as possible via door-to-door canvassing, postcards, and phone calls. They also explained court hearing procedures and offered guidance on how to apply for rental assistance. They then attended court hearings to record the rulings.

Some tenants facing eviction were not contacted because there weren’t enough volunteers to reach every tenant.

In comparing tenants contacted by TEENS volunteers to those who weren’t, the difference was clear: tenants who received information from TEENS were 13 percent less likely to receive a “rule absolute” judgment than those who weren’t.

The specific method also made a difference. While some volunteers spoke to tenants directly, either in person or by phone, others were only able to leave voicemails or send mailers (comic books and postcards explaining the court procedures). Those tenants who spoke directly with a volunteer were 18 percent less likely to receive a rule of absolute judgment.

Researchers also examined other factors—most notably whether each side had legal counsel—and found that they, too, impacted the outcome of the proceedings.

“A tenant showing up to defend themselves in court reduces the probability of a rule absolute by 33 percent. With a lawyer, the probability decreases by 22 percent,” the study reported.

These findings further emphasize the need for Right to Counsel programs sponsored by both nonprofits and municipal governments. These programs provide attorneys to tenants facing eviction at no charge.

“In demonstrating that providing renters with even relatively basic information better equips them to argue in court. This knowledge is kept hidden from and unavailable to many average people without law degrees or familiarity with local legal institutions,” researchers wrote. “For most people, navigating a complex system in which technical terminology, formalized norms of conduct, and the personal predilections of several judges are all at play is difficult. Gaining knowledge about the system would take time—something that many low-income residents might not have in abundance.”