The Cicero Institute Makes Homelessness Worse for Everyone 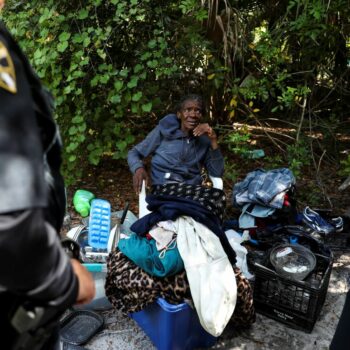 Bad things happen when there’s a disconnect between lawmakers and people on the ground doing the work. Funds get misrouted and then misused, as in the case of COVID-19 relief. In other cases, agendas get pushed that don’t help – instead, they hurt homeless people.

These agendas will come cleverly disguised as well-intentioned policy, thick with noble and compelling rhetoric. They manage to fool some, adding to the danger they pose. This has been the case in many states following the emergence of the Missouri think tank The Cicero Institute.

The Cicero Institute was created to be an example of a new approach to homelessness. Unfortunately, the changes it advocates for cause harm as it seeks to erase homeless people through criminalization rather than address or even acknowledge the roots of the problem. Its theories are steeped in prejudice and cruelty.

Identifying the Dangers of The Cicero Institute

One of the primary reasons this organization is so insidious is its manipulative language. A quick look around its website reveals no glaring red flags. It features plenty of feel-good phrases like “advance liberty and opportunity for all Americans,” “fix broken public systems,” and even “help solve our nation’s homelessness epidemic.” Well, who would object to that?

Policies modeled after its “Reducing Street Homelessness Act” are adopted by politicians under the radar of many voters, who don’t realize the harm it pushes for. Voters who would be appropriately horrified don’t realize how bad it is because the language seems benign at first glance.

A deeper look into the terminology used by The Cicero Institute reveals all the signs of trouble—for instance, a repetitive and aggressive focus on “entrepreneurship.” In its website’s section on homelessness, the organization states its approaches are required to not only serve the homeless but to protect public safety, taxpayers, and local businesses.

So, there you have it.

What you won’t find on The Cicero Institute’s website is any reference to or mention of consultation with social workers or even experts on homelessness.

The statistics it references—mostly about unsuccessful past approaches to solving homelessness—come from economists, political entities, and others who don’t interact on a personable level with homeless people.

The way the organization speaks of social workers makes it clear it feels they are soft, ineffective, and troublesome.

One article emphasizes the importance of “social workers willing to mandate treatment and enforce public order.” It also blames the creation of the Housing First model, which it dramatically vilifies, on macro-level social worker Sam Tsembris.

Some might argue entities like The Cicero Institute are necessary because of the scope of the problem of homelessness. They might say a social worker sees things on too small a scale—that they can’t see the forest through the trees—and are therefore unqualified to make effective decisions about policy.

But is there really such a difference between a macro-level social worker and a politician?

Many social workers are in various elected offices, from school boards to Congress. Social workers study policy and statistics, too. They study systems and cycles and understand the intricacies of how homelessness, mental health, and substance abuse interact. They don’t fall into oversimplified cause-and-effect explanation traps.

Social workers also prioritize empathy and compassion—which is important because, at the end of the day, no matter the scale and scope of the approach, the consequences will always be felt most acutely on the street.

So why don’t they listen to social workers, especially ones who are experts on homelessness?

Sure, you could argue that to truly rehabilitate someone is to create a productive member of society who will financially give back. But that’s not guaranteed, and the money won’t be theirs. Slave labor and endless financial gain via private prisons, on the other hand, are right there waiting.

Adding to the manipulation, some states’ versions of The Cicero Institute’s proposal include provisions for short-term services—such as Missouri’s, which allows for a stay of up to six months in a state-funded camping facility in which they’d receive mental health and substance abuse evaluations. However, these are required services and come at a sort of cost. It’s designed to be punitive rather than rehabilitative.

Invest in Organizations That Do the Work

There has been a strong countermovement building against The Cicero Institute’s influence by people working on the ground and by advocacy organizations—who often go hand in hand. In Georgia, a collective of nine organizations combined their resources to oppose two bills modeled after legislation from The Cicero Institute. Both bills have been defeated.

Organizations like Invisible People will continue to use their platforms to spread the word about corrupt organizations like The Cicero Institute, so voters and advocates can stay informed. Our videos provide extensive education on what it’s like on the ground and build much-needed empathy.

Finally, and perhaps most importantly, voters need to care. There are too many people who aren’t cruel, but just don’t pay enough attention to notice the harm being done under their noses. These are the people we can reach through educating, expert-driven organization work.

Reaching these people is our job—let’s keep spreading the word.

How Covid-19 Has Impacted Homeless People

As for many others, covid has been very stressful for my family and me. Right now, my husband and I are enduring the symptoms of long-covid. We contracted the virus nearly a month ago but still have symptoms today. And...

As we move towards the end of 2022 I am drawn to reflect on the year and our work – specifically our impact on people who continue to be marginalized and disproportionately experience homelessness. Today, I am...

Midterm election season has come to a close. Would-be leaders have engaged in heated debates. Maps of the United States have been posted online, stenciled, and colored in patriotic hues, the country taking on its...

How Covid-19 Has Impacted Homeless People