The True Price of Freedom: A Look at Veterans Row 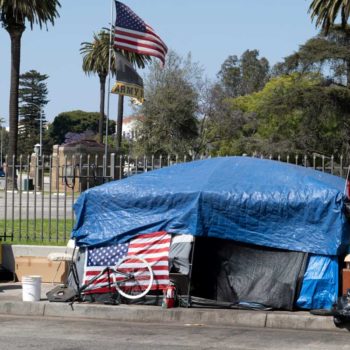 The United States of America has been in a state of perpetual war for centuries. According to Freaknometrics, since 1776, we have had only seven years of peace. This means that we have been warring for 222 years, pretty much consecutively, with almost no end in sight. Often, the citizens of the US ignore this glaring tragedy under the misled ideology that the war is happening “somewhere else.”

This is not entirely true. Sure, the bombs might be exploding in a far-flung territory you can’t see, but the aftershocks are right in our own back yards.

Enter Veterans Row, a Protest Encampment Designed to Wake the Masses to the Horror of Veteran Homelessness

In a candid interview with Invisible People, nonprofit organization AMVets representative Robert Reynolds explained the stark history behind the encampment.

“We had been raising concerns about homeless veterans on San Vicente Boulevard long before Veterans Row went into place with the large tents. In 2019, there were veterans out here sleeping all over the sidewalk. There was never any outreach or anyone really paying attention.”

This nonchalant attitude toward veteran homelessness is one of the main reasons the devastating phenomenon has continued unchecked for so long.

Robert goes on to describe the abhorrent conditions under which so many LA-based veterans are forced to live. He describes a scene of returning warriors injured and bleeding helplessly on the streets in front of the local veteran hospital- a scene best left between the pages of a dystopian thriller. Yet here it is, the war that we brought home.

At a Glance: A Brief Overview of California’s Dark Legacy of Veteran Homelessness

California currently leads the nation in veteran homelessness, a record no locality would proudly hold. Injuries, both physical and emotional, plague this specific demographic of people. When combined with societal isolation and lack of employment opportunities, these injuries have left approximately 1.5 million veterans vulnerable to homelessness.

While the homeless crisis is national and growing, California’s treatment of veterans is particularly harsh. Many former soldiers have merely relocated from an overseas battle to one in their home country.

Abroad, the war for territory is an ideological one. At home, the war for land rests between major corporations and special interest groups, all vying for space that technically belongs to veterans. In both scenarios, these former members of the US militia play the front. When it’s time to tally up the casualties, they’re first in line.

“I, myself didn’t really understand the relation between not taking care of the veterans and the misappropriation of land,” Robert Reynolds explained with a scratch of his head.

Like many human rights violations, greed sits at the center of every homeless California-based veteran’s plight. It is greed over land and revenue, not lack of resources, that has deepened the crisis.

According to KRCW’s Greater LA news, the VA has garnered a bad reputation for usurping land from homeless vets dating back to the 1970s. Leasing properties designated for the help of homeless veterans and then pocketing the profits has been the corrupt scheme keeping veterans on the streets for decades. Yet, this is rarely mentioned in major news or media.

As veterans began to make sense of what was happening, many lawsuits were filed. There were even some small legislative victories. Some of the most notable court cases include:

In recent history, the once flourishing 388-acre land parcel surrounding the VA has served as a prosperous region for everyone except the veterans it was designed to house. It has since become a playground for private school kids and a stomping ground for corporate entities to turn millions of dollars.

Investigations into the VA show a monetary discrepancy somewhere between $28 million and $40 million. This equates to what NPR has called “a shameful past.”

Unfortunately, what we see now is an equally shameful future. Court wins, and media exposure have amounted to little more than empty promises for most. LA veterans continue to suffer in the name of land misappropriation and overwhelming corporate greed.

Today, rows of tents emblazoned with American flags surround the circumference of the Veterans Association. They, too, house homeless veterans. But there is a significant difference. They are funded by donations and adorned with books, trash cans, and humble furnishings. They symbolize the homelessness that has gone ignored, but the people inside them still need and deserve more.

It is not the absence of bombs or bullets that signifies peace. Instead, it is the presence of safety and security that make peace a goal people can achieve.

Until every member of our nation’s homeless community can enjoy the sanctuary of a home, we are still at war. Please talk to your representatives about fighting homelessness.