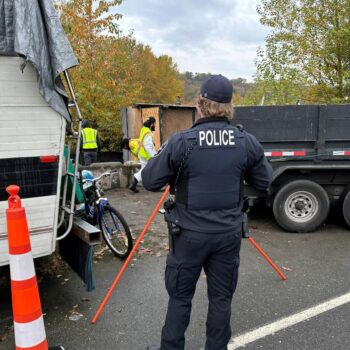 The state of our world is a heated debate – one we are both engaged in and living through. Sides are being taken. Stakes and sea levels are being raised. With tempers and forests aflame, it’s important to remember that sometimes what we are not told makes all the difference in the world…

Why Are We Not Being Told About the Harmful Environmental Impact of Criminalizing Homelessness?

We are told that oceans are rising and that greenhouse gases are trapping heat in city sidewalks, causing urban spaces to be hotter than surrounding suburbs and rural towns. We are witnessing our neighbors being cast out into alleyways, priced out of the housing and rental markets, aged out of the labor systems, and cycled out of the prison industrial complex.

People in positions of power have long lauded their homeless criminalization laws as a way to keep the streets safe while saving the environment from damage caused by homeless encampments.

We are told this is the only way to achieve sanctuary and sanitation. What we are not told is the data doesn’t support these presumptions. In fact, the numbers indicate that the opposite is true.

Homelessness in post-pandemic America is less hidden than just a few years ago when distractions made ignorance possible, perhaps even blissful. Gone are the days when we could all bury our heads in our smartphones, assuming the desolate state of homelessness could never reach out and touch us or alter our lives forever.

In 2022, the general public is very much aware of the ever-burgeoning homeless crisis, despite being somewhat misled about the leading underlying causes of this issue. One of the reasons for this is that homelessness is more prevalent, having steadily increased consecutively over the past five years, with experts projecting it could increase by 49% in the next four years.

But another reason for this raised awareness is that homelessness is more visible. Reuters reports that in 2020, more than 200,000 people were classified as experiencing unsheltered homelessness, meaning they were visibly sleeping outside, often in tents and makeshift shelters. In LA County alone, there’s been a 17% increase in vehicular homelessness and encroaching encampments.

Common examples of anti-homeless legislation include laws that restrict or completely prohibit:

These laws are pedaled to the public under the guise that they help unsheltered individuals and families get off the streets and into safe, indoor spaces. However, this is almost always a ruse.

In truth, encampment sweeps rarely ever lead to permanent housing situations. Instead, the “violations” cause people already enduring the horrific condition of homelessness to have to shell out hefty fines, lose all or most of their belongings, and face the looming threat of imprisonment.

Meanwhile, the very government violating the human right to shelter continues to profit and perpetuate the vicious cycle. But it turns out that’s not all. New reports suggest that homeless criminalization is not only harmful to our impoverished neighbors or helpful in inflating a corrupt for-profit prison system, but it is quietly wreaking havoc on the environment as well.

The study first appeared in “Environment and Planning E: Nature and Space” and later became a topic of interest for the National Low Income Housing Coalition. It investigated trends among 385 unhoused communities and found several instances of environmental injustice that resulted not only from homelessness but also from the criminalization aspect of homelessness. The problem was multi-faceted, showing, among other things:

As unhoused people are threatened with punitive repercussions for merely existing, they are simultaneously encouraged to “move along” to more dangerous territories such as subway tracks and underpasses. Several participants in the study attested to noise pollution ringing out over the city streets as law enforcement officials stormed these camps, shuffling the residents further into obscurity and certainly at a price.

Tossed Out: The Environmental Costs of “Cleaning Up” Encampments through Sweeps

When city workers come to allegedly “clean up” these encampments, the resident’s belongings rarely wind up in storage. In most instances, they wind up in the trash. Picture city dumpsters across the country brimming with tents, shopping carts, clothing, canned goods, identifying documents, cell phones, and jewelry. How could this possibly be pitched as good for the environment?

Under different circumstances, environmentalists are outraged at the thought of throwing away tents. According to Yahoo! life, festivalgoers who leave behind thousands of tents a year have created quite the controversy, with activists listing a myriad of long-term environmental implications caused by tent removal.

Here are just a few of those concerns:

On the topic of abandoned festival tents, sustainability manager Lily Robbins called them “one of the worst things to try and recycle,” adding that approximately 90% of them will most certainly wind up in a landfill or incinerator, pumping harmful pollutants into the air.

If homeless criminalization is this bad for the planet, how could it possibly be good for you or your peers, or the children, or our collective future, as many politicians proclaim?

Out of sight, out of mind, and into the landfill for good measure. This is the policy we’re being offered as a long-term solution to homelessness.

Talk to your legislators about cleaning up the city by drafting laws that make housing an irrevocable human right.

Being Poor Makes an Already Vicious Cycle that Much More Difficult to Escape On some level, we all understand that it’s more expensive to be poor, but many of us still balk at the concept when it’s laid out plainly like...

While some communities are still counting votes, there are enough final results to provide a general idea of what the 118th Congress will look like. This post will give my initial thoughts about how Congress has...

Invisible People is proud to announce we have been named a recipient of a racial equity grants given by the Chan Zuckerberg Initiative (CZI). We are one of more than 25 recipients of the grants, which support...