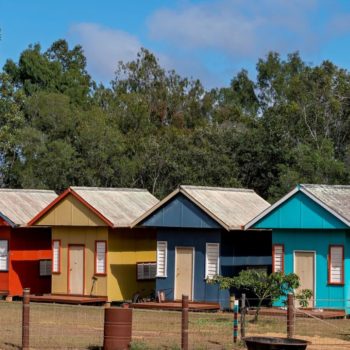 In the conversations about homelessness solutions, we hear a lot about tiny house villages. Some believe it’s a perfect solution. Others think it’s a nightmare. Here’s my perspective.

First, let’s define what we are actually talking about here.

There are genuine tiny houses seen on television, which are often expensive, luxury houses for financially well-off people who want to live the trendy “minimalist” lifestyle. These are expertly built homes designed to be efficient, often 100% off the grid, and allow for indoor cooking, a bathroom, and a sleeping area. With this option, the tiny of your tiny house depends on you. However, I doubt this is the type of house they’re proposing for homeless people.

In a recent Invisible People article, a company called Pallet built some “tiny houses” for homeless people as a stop-gap solution. Then some of those “houses” burned down despite being equipped with a smoke alarm, carbon monoxide detector, and fire extinguisher.

These were not actual “tiny houses” in the true sense. They were little more than glorified sheds, lacking bathrooms and kitchens. The article also mentions twin-sized bunk beds in a 64-square-foot structure, which is only slightly larger than a prison cell.

While I would gladly accept a place that is not much bigger than a prison cell, I would need all my conditions met, including:

I would also need to soundproof the structure. Because I suffer from sensory overload issues and chemical sensitivities, I have a long list of special needs. That includes an odor-free environment that is very quiet and with controlled lighting. Anyone with autism or who has an autistic child understands my special needs, but most of the public doesn’t.

So my tiny house would be an actual tiny house. It would not be built for luxury. It would simply meet the needs of a person who is both physically limited by chronic illnesses and disabilities and also by special needs relating to autism.

I don’t think that is asking so much.

Most people would never want to live alone, isolated, in a tiny cabin in the middle of nowhere and have to hand scrub their laundry. However, I might as well be asking for a humungous mansion with a built-in jacuzzi, tanning bed, 15 bedrooms, a gazebo, and a full-time staff.

I’ve previously discussed ideas for having RV parks for people who need a permanent place to park their RV and live out of it like a tiny house. A sort of RV “safe parking” program, but I proposed setting it in a clean, quiet, country environment with strict rules of conduct and affordable rates. In that case, you’re not even asking for a company to build temporary housing. You just need land and plots with sewer, water, and electric hook-ups.

Bottom Line: I would not want to live in a so-called “tiny house” like the ones that are being proposed in cities and often involve roommates and common public bathrooms.

On the other hand, I am very willing to live alone in a very small space so long as my basic needs listed above are met. Quiet, private, odor-free, with a place to shower, wash clothes and dishes and make basic meals. So long as I have electricity and water and septic, I can survive with very few luxuries.

The problem is that this sort of housing is not available or affordable in my area.

I could theoretically move to the preverbal “middle of nowhere,” but as a disabled person who also has autism, that is a frightening thought! To move to someplace where I know no one at all? Far from home base? Not to mention the expenses of moving. Losing your doctors and other services you depend on. People shouldn’t have to flee an area they’ve lived in for many years. Housing should be accessible to every person.

By modern standards, I am asking for so little. Just enough to basically survive. Something I can’t be thrown out of – ever. A place that offers me peace.

If there is one thing many homeless people want and truly need, it is peace, quiet, and a sense of stability. Many of us have PTSD. How can anyone heal without stable housing?

In my world, nothing is stable, not even my van, which I’ve been trying to get to pass inspection since February! My inspection expired on March 31st and still won’t pass the NY state inspection.

As of this writing, I am in a vehicle that is not legal. I was given a ticket four days ago. My hands are shaking, I feel nauseous, and I have to go to court in May. Believe me, my life is not worth living, and there is no hope I’ll ever even be able to get a shack with an outhouse, much less a decent little tiny house.

I have no stability and no hope, just daily, oppressing, non-stop stress.

All It Takes Is a Little Bit of Bad Luck in a Bad System It’s all too common today for the average housed person to passively consider themselves better than the average unhoused person. They don’t realize that they’re...