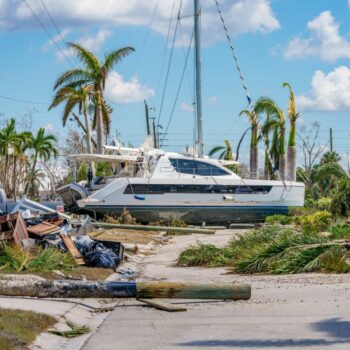 Hurricane Ian swept the Florida Coast and grazed sections of South Carolina in late September and early October of 2022. The category 4 storm delivered deadly winds that reached a staggering 155 mph and claimed the lives of more than 100 people.

Now deemed the deadliest hurricane on US soil since Katrina and the deadliest storm since 1935 for Floridians, economists are still hard at work measuring its impact.

With a devastating death toll in its tracks and upward of $65 billion worth of damage in its wake, Hurricane Ian has adversely affected coastal residents in myriad ways. One of those ways is through creating homelessness.

Nearly 10,000 People Were Made Homeless by Hurricane Ian

When the destructive storm touched down in Florida, it flooded more than just the narrow neighborhood streets and residential districts. It also flooded the local homeless shelter system because tens of thousands of people whose homes were irreparably damaged found themselves displaced and in need of refuge.

It was a chaotic scene with streets covered in debris where residents who didn’t lose their homes lost all or most of their belongings and lived behind mountains of their prized possessions. As for those who were displaced, many are still homeless, taking up temporary residency in the following places:

As you might imagine, this sudden jolt into transitional homelessness is a heavy burden for individuals and families.

It is uncertain what will happen to them in the future. Will they remain homeless? Will they be asked to leave these temporary facilities and emergency shelter beds and be relocated onto the streets or, worse – into prisons?

The fates mentioned above are real possibilities if we consider the history of homelessness from hurricanes. But there is something else to be considered here – the fate of the homes they’ve left behind in shambles.

Homelessness and hurricanes are deeper than the rushing waters that overflowed the Caloosahatchee River. There are three subsets of vulnerable people that need to be considered:

Individuals and families made homeless by the storm after incurring irreparable structural damage to their homes. These people, newly homeless in the wreckage, must navigate an uncertain tide of social safety nets and loopholes. Many of them will lack the necessary documents they need to apply for aid. Many more will be displaced multiple times as they are bounced from one temporary shelter to the next, often losing loved ones, lives, and personal possessions in the process.

Individuals who were already homeless before the storm hit. Many of them, lacking a verifiable address, will be denied financial aid on that basis alone. They will also face the daunting prospect of competing for a limited supply of temporary shelter. But what about permanent shelter, you may wonder? Permanent affordable housing is also in jeopardy, hence the third kind of homelessness caused by hurricanes.

The third group of people made homeless by hurricanes is much harder to detect because they don’t exist just yet. In the months that follow Hurricane Ian, it is projected that even more people will fall into homelessness as the already short supply of affordable housing further dwindles. This is because of what might happen to the homes that were initially destroyed.

After Hurricanes Like Ian, Previously Dilapidated Houses Often Return to the Market with Higher Price Tags

The Florida coastline is now home to thousands of demolished houses that have been diminished to mere debris, causing homelessness and housing insecurity.

We see this as a tragedy. However, corporate America sees this as an opportunity to raise prices and further reduce the supply of available, affordable homes.

In a recent interview, Executive Director of the Quality Life Center of Southwest Florida Abdul’Haq Muhammed explained the situation with the following quote:

“Homes are being bought by corporations — out-of-town corporations, often, and they’re renovated and then put back out on the market at a level that is unaffordable for people in that community.”

Rebuilding: Talk to Your Lawmakers About Drafting a Plan for Affordable Housing

As it turns out, come rain and storm, hurricane and high water, the lack of affordable housing continues to be the driving force behind homelessness. Get in touch with your local lawmakers today and ask what their plans are for building affordable housing in Florida and across the nation.

Now is the time to urge your legislators to support the bipartisan Eviction Crisis Act (S.2182), which would create new tools to address the nation’s ongoing eviction epidemic. Millions of low-income families who rent...

Now is the time to urge your legislators to support the bipartisan Eviction Crisis Act (S.2182), which would create new tools to address the nation’s ongoing eviction epidemic. Millions of low-income families who rent...

Learn How You Can Best Help Homeless People During the Cold, Winter Months One afternoon I was sitting alone on a snow-covered bench in front of the Harlem Meer. Just sitting there quietly as the snow fell around me. I...

Where in the United States is it Illegal to be Homeless?

Homelessness and Poverty Take a Toll on Teens