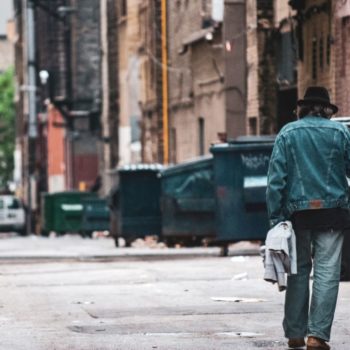 Have you ever passed a visibly unhoused person on the sidewalk and thought to yourself, “Why don’t they just go to a shelter?”

You’re a kind-hearted, reasonable person. Never would you hurl insults at a fellow human being. You’re not that person who shakes your fist and screams at them to get a job. You understand that times are hard, wages are stagnant, and rents and mortgages are sky-high.

There have certainly been months when you had to choose between the rent and other life-sustaining products like food, electricity, or toiletries. You’re a do-what-you-have-to-do kind of person.

But in the back of your mind, you assume that if you had to endure homelessness, you’d at least spend those harsh winter nights in a shelter.

Lots of housed people think this way, and it isn’t surprising. Shelters are pushed on society as a long-term solution to homelessness even though they’re really just another means by which to push the problem into obscurity. From the outside, they look nice enough to reside in temporarily. Statistical data, however, paints a very different picture from the one you have in your head – the one with the warm bed, hot meals, and a chance to finally get a decent night’s sleep.

“It’s just extremely hard to rest or even try to relax and get a decent night’s sleep. You’re constantly on guard, and I also worry about getting sick or something happening to me and my belongings. People up all night and folks looking to get into some kind of fight at the drop of a hat,”

Other statements from former shelter residents echo the sentiment.

Michael Eschbach, of Parkdale, compared the overcrowding to being “like a rat cage” with people stuffed on a basement floor fist-fighting for bathrooms and beds.

In addition to the testimonies of former and current shelter residents, videos continue to emerge displaying horrid conditions, including:

Is it any wonder many would refuse to be warehoused under such horrendous conditions? In mass media, when the term “shelter-resistant” is casually tossed into the text, it is never alongside statistics like the one mentioned above.

When the safety of our unhoused neighbors comes into play, usually only a fleeting thought brought about by brisker weather and a looming winter, there is always the push to put people inside. It sounds genuine and heartfelt, but whose needs are really being served – members of the unhoused community or our own? Whose comfort is the actual concern here?

The City of Toronto acknowledges that shelter death tolls are escalating at a rate that just reached 125%. However, they’re certainly not broadcasting this information to the general public, whose very tax dollars are funding the expansion of this reprehensible system.

The City of Toronto reveals that 132 unhoused individuals tragically died in the shelter system in 2021.

Perhaps they were old, you might be thinking. The average age of death was 47.

Perhaps they were sick, you might consider. But what if it is the system itself that is sick?

In a 2020 lawsuit filed by the Canadian Civil Liberties Association and other advocacy organizations, the Ontario Superior Court ruled that the City of Toronto had failed to meet settlement requirements. It failed to implement social distancing policies properly and exhibited an overall pattern of a “lack of transparency.”

This pattern of dishonesty has enabled many politicians to present homeless shelters as solutions rather than the death traps they really are. The taxpayers and the homeless community members are paying the price. The latter group is paying for it with their lives.

Shelters were first introduced as temporary solutions to a crisis-level emergency. But they turned out to be a whole lot more expensive than the most straightforward solution, which is housing.

For better or worse, now our cities are stuck building, running, and maintaining these expensive congregate facilities. Cities have only doubled down rather than ditching this system as the priority strategy.

Shelters are increasingly becoming smaller, less equipped, and more violent to the point of being deadly. How many more lives must be lost before your voice is lifted? Contact your local legislators, politicians, and urban planners and ask them what they’re doing to reduce shelter violence and eliminate homelessness.