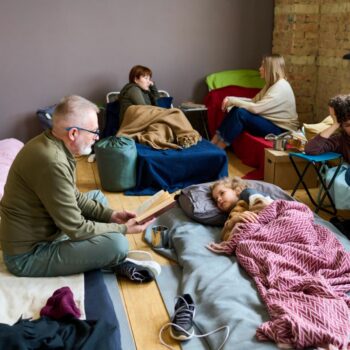 Toronto has come under fire lately, both for its homeless problem and its proposed “solution.”

Currently, Canada’s most populous city serves as both a centralized hub of homelessness and a petrifying graveyard for unhoused bodies. This is no exaggeration. With 10,000 people on the streets and 80,000 more on waitlists for affordable housing, people living in limbo are dying before obtaining permanent housing placement.

Emergency Homeless Centers in the Region are Unsafe and Overcrowded

In 2016, WBFO and NPR reporters warned of the perilous conditions taking over Toronto’s emergency homeless shelter system. They quoted the Ontario Coalition Against Poverty Survey, which stated, “conditions imposed on those who access the system are also failing to provide health-sustaining facilities or offering conditions that respect human dignity.”

Among the long list of transgressions, investigators claimed these shelters:

Homelessness surged that year and the following years, while shelters of both the permanent and emergency variety struggled to tackle the overflow. Consequently, emergency homeless shelters became hotbeds, not for members of the homeless community as was proposed in city planning, but for creepy crawly critters like bedbugs and lice that began to infest such facilities.

A shocking 11,677 violent incidents occurred in Toronto shelters between 2016 (the year the problem became known to the public) and 2021 (the most recent data year on record). This led to the Toronto shelter system being referred to as an “explosion of fury and violence and blood.”

An important point of reflection when misinformed or irresponsible journalists attempt to describe unsheltered homeless people as “service resistant.”

Lives are indeed being lost by the hundreds in homeless shelters citywide. And that’s merely the tip of the iceberg. Another issue nobody wants to discuss publicly is the unfathomable number of people being turned away from these shelters – a number quickly climbing to unprecedented rates.

An Average of 40 Potential Occupants Per Night are Being Turned Away from Toronto’s Homeless Shelter System, with Denial Rates Continuing to Soar

Shelter is being denied across Toronto, as people experiencing homelessness are left with no safe place to turn. The current denial rate for shelter sits at an average of 40 potential occupants per night.

Data shows that that number was even higher in the first six months of the calendar year, at 63 denials per night.

The NPR investigation mentioned above concluded that approximately 80% of the regional homeless people they surveyed had been denied shelter at the door. A more recent study by the Information Mobilization for Public Accountability Collective Toronto (IMPACT) suggests these denials represent almost half of all homeless people seeking shelter within the flawed, unstable system. Such is the stark reality for the city’s houseless residents, as shelters are becoming increasingly more “resistant” to them, and mainstream media presents the situation as if things were happening the other way around.

“The city has been saying that people should simply move inside. And the reality is that there’s no inside for people to go to. It’s been turning dozens of people away,” said A.J. Withers of IMPACT.

Fairing Foul Weather Without Any Walls

As climate change sweeps the nation and the world, emerging data concludes that unhoused individuals and families bear the brunt of severe storms, often finding themselves hit hardest and first.

Eighty thousand names are brandished on the waitlist for affordable housing. With the average expected wait time currently set at ten years, this means families and individuals with neither home nor shelter have plenty of opportunities to lose their lives, loved ones, and belongings to inclement weather.

Is it any wonder our unhoused neighbors are now 200x more likely to die from extreme heat than people with housing?

Yet another ramification to shelter denial is the potential for criminalization. There are currently harsh bylaws in place to criminalize homeless people and deter them from engaging in life-sustaining activities such as standing, sleeping, and camping in public. As a result, houseless individuals and families might wind up in an even more dangerous system than the Toronto shelter system – jail.

Talk to Your Local Legislators About Making Housing a Human Right

Human beings should not be shuffled from street corners to institutions, from jail cells to hospital beds, and back again, through a broken system that is both dangerous and outdated. Please urge your local legislators to focus on policies that make housing a human right.

This article was first published at Texastribune.org: Amid Rising Housing Costs and Relentless Inflation, an Increasing Number of Texans Are Struggling to Pay Their Rent and Stay in Their Homes Jade Barron doesn’t know...