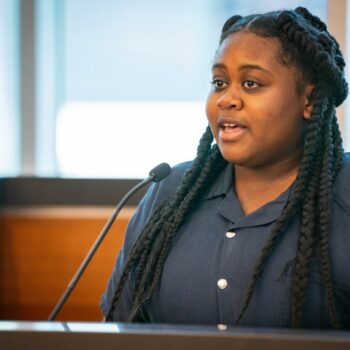 Another Example of the American Justice System Being Anything But Just

As you may have been able to tell from the title, this article will discuss violence, including sexual violence against a minor. If you’re not in an appropriate place to engage with content like that right now, there are plenty of other subjects featured in the news section. Take care.

Pieper Lewis was just 15 years old when she found herself homeless after running away from an adoptive mother described as mentally and emotionally abusive. Tragically, she wouldn’t escape abuse after leaving her mother’s house.

Pieper was sleeping on the steps of an apartment building in Des Moines, Iowa, when a 28-year-old man took her in, but it wasn’t out of the kindness of his heart. The man began trafficking her to other men for sex, making money off her body, and threatening her at knifepoint to comply. She was 15.

Because of this sex trafficking, Ms. Lewis found herself in the apartment of 37-year-old Zachary Brooks in June 2020. According to her testimony, Brooks raped Lewis multiple times in the weeks leading up to his death. After the final time, she grabbed a knife from the bedside table and stabbed him more than 30 times, resulting in his death.

Legal Response to the Killing

Police and prosecutors involved in the case have made no dispute of the facts that Ms. Lewis was sexually assaulted and trafficked as a minor. Their case rests on an asinine argument alleging that Mr. Brooks was asleep at the time of the attack and, therefore, not a threat to Ms. Lewis.

Many states have Safe Harbor laws that recognize the realities and trauma of sex trafficking and give its victims legal protection in cases like these. Unfortunately for Pieper Lewis, Iowa is not yet one of them.

That’s how it came to pass that she was pushed into a plea deal, charged with involuntary manslaughter and willful injury, and put on five years of closely supervised probation, any violation of which will put her in jail for up to 20 years – in addition to the two years she’s already spent in juvenile detention awaiting her trial.

But the icing on the terrible cake comes courtesy of Iowa’s mandatory restitution law that the Iowa Supreme Court has upheld. Because of this, a homeless, now-17-year-old victim of human trafficking is being forced to pay $150,000 to the family of her rapist.

Prosecutors, of course, felt this was only right, citing how the murder had “left [Mr. Brooks’] kids without a father.” What good a father who routinely rapes 15-year-olds would be to them was apparently not a question that crossed their minds.

Public Response to the Sentencing

Needless to say, many people were shocked to hear the details of Lewis’s case and how everything played out. The sense of injustice is so strong that a GoFundMe campaign made by Leland Schipper, a former teacher of Pieper’s, has far surpassed its original goal of raising $150,000 to help her pay for the required restitution.

Others rightfully wonder about the fate of the 28-year-old man who trafficked Lewis. Will he face arrest and prosecution for his crimes? Inquiring about this with Des Moines police will only get you a boilerplate response about confidentiality.

For those closest to the case, the relief is palpable. Pieper was able to escape relatively unscathed from a system that regularly imprisons Black people like her quickly and unjustly.

When she was initially charged with first-degree murder as an adult, it looked like Ms. Lewis would meet the same fate. But taking a plea deal allowed her freedom, as opposed to a trial where Iowa jurors would have brought in all of their prejudices and misogynoir and judged Pieper as a violent, promiscuous adult instead of a child in the desperate situation that she was. Check the comment section of any article referencing the case for examples of these racial stereotypes in action – then check yourself, your friends, and your family.

Pieper Lewis is far from the only poor, Black person to be retraumatized by the American judicial system. Keeping generations of people locked in poverty and locked up is what it does best – and that’s not a bug. It’s a feature. But in the case of Pieper Lewis, despite all that she has already endured at such a young age, her spirit has not yet been broken.

Addressing the courtroom during her trial, this young, resilient, Black girl had this to say:

“My spirit has been burned but still glows through the flames. Hear me roar, see me glow, and watch me grow. I am a survivor.”

A safe harbor law that could have protected Pieper Lewis and other trafficking victims like her was actually passed by the Iowa House earlier this year. However, it stalled in the Senate due to pressure from law enforcement groups insisting that the protection it offered vulnerable citizens was “too broad.” A working group was established to make modifications and reintroduce the bill, but progress has been slow to glacial.

If you live in Iowa, contact your state senators and representatives to voice your opinion on this case and the proposed safe harbor bill. Legislative action is the only way to remove or modify the legal requirement for restitution in cases like Lewis’s, so your state reps are the people to talk to.

Beyond that, we can all help keep people from falling prey to trafficking by ensuring that everyone is well-supported, cared for, and housed in safe, secure, and affordable housing. These issues are all connected. Talk to your legislators about strengthening our safety nets today. The consequences of falling through the cracks can be dire.