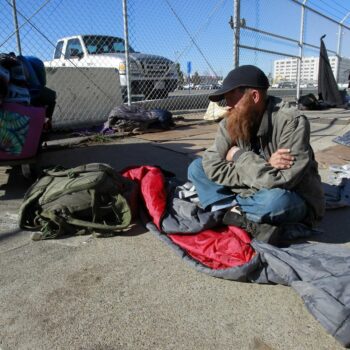 Veteran homelessness is down 11 percent since 2020, according to the latest count by the federal government.

The Veterans Administration, the Department of Housing and Urban Development, and the U.S. Interagency Council on Homelessness announced on Nov. 3 that, according to their annual Point-In-Time count, homelessness among veterans has dropped from around 37,000 in 2020 to around 33,000 in 2022.

“One veteran experiencing homelessness will always be one too many, but the [new data] shows that we are making real progress in the fight to end veteran homelessness,” VA Secretary Denis McDonough said in a statement.

The decline from 2020 to 2022 is the most significant drop in veteran homelessness in more than five years, down from 37,252 to 33,136. According to the VA, those numbers don’t reflect efforts launched in 2022 that have provided housing for an additional 31,000 vets as of September. The programs aim to rehouse 38,000 people by the end of the calendar year.

The 2022 count, held in January, was the first since January 2020 due to the pandemic. That count reflected a slight uptick in numbers after a steady decline from the time the count began in 2010 until 2016, followed by a relative plateau from 2016 to 2020.

The government has undertaken such efforts in the last decade to address a serious problem: veterans are 50 percent more likely to experience homelessness than their civilian counterparts. That’s why the federal government began a dedicated effort to end veteran homelessness in 2010 when President Barack Obama began the PIT count after announcing “Opening Doors: Federal Strategic Plan to Prevent and End Homelessness.”

“As the most far-reaching and ambitious plan to end homelessness in our history, this plan will both strengthen existing programs and forge new partnerships,” said then-Secretary of Housing and Urban Development Shaun Donovan. “We will harness public and private resources to build on the innovations that have been demonstrated at the local level nationwide. No one should be without a safe, stable place to call home.”

The effort focused on a Housing First approach, which prioritizes providing permanent housing over other services—substance abuse treatment, mental health treatment, and social services. The thought behind Housing First is that access to permanent housing makes it easier for people to access services, and those services are a secondary need to a secure place to live.

Numerous studies show that Housing First is an extremely effective solution to homelessness. Indeed, since 2010, homelessness among veterans has dropped 55.3 percent.

“Housing First is driven by the understanding that the most effective way to end a person’s homelessness is to connect them with housing as quickly as possible, without onerous preconditions, and then to connect them with the supportive services that they may need,” according to the National Alliance to End Homelessness. “Research consistently shows that this approach yields better service outcomes, is more cost-effective, and helps people stay in housing longer than treatment-first models.”

Officials say the veteran homeless rate is declining at a faster pace than that of the general population. That’s helped by investment from President Joe Biden’s 2023 budget, which includes an 84 percent increase for the Department of Veterans Affairs’ Supportive Services for Veteran Families Program. The boost contains more:

“This progress shows what is possible when our federal, state, and local leaders rally behind a common goal and demonstrate the collective resolve to help those in need,” said Ann Oliva, Chief Executive Officer of the National Alliance to End Homelessness.

USICH Executive Director Jeff Olivet pointed out that the drop was especially impressive given the circumstances under which it was accomplished.

“Not only did we lower the number of Veterans experiencing homelessness, but we made this progress during a global pandemic and economic crisis,” Olivet said. “This proves that, even under the most difficult circumstances, we can take care of each other and address homelessness.”

If you are a veteran experiencing homelessness or at risk for homelessness, call the National Call Center for Homeless Veterans at 877-4AID-VET (877-424-3838). Visit the VA Homeless Programs website to learn about housing initiatives and other programs for Veterans exiting homelessness.

Each year in the run-up to the holiday season, we pause to commemorate Hunger and Homelessness Awareness Week. This year’s event takes place November 12–20. This annual event, run by the National Coalition for the...

California’s cities aren’t doing enough to combat homelessness, Gov. Gavin Newsom decided last week, so he’s halting $1 billion in state spending for local governments until they can come up with something better...