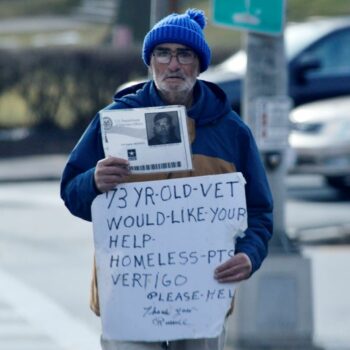 Midterm election season has come to a close. Would-be leaders have engaged in heated debates. Maps of the United States have been posted online, stenciled, and colored in patriotic hues, the country taking on its patchwork of differing political opinions by presenting it to the public as a digital, color-coded pictogram.

Still, this is only part of the story.

As political ads fade back into the background and newly elected leaders take their posts, many of the diplomatic talking points that drove those campaigns will also dissipate, lost in the sea of social justice hashtags.

One of the biggest debates to take center stage in major metropolitan areas was homelessness. The discussion has captivated public interest in the wake of skyrocketing rents, astronomical housing prices, and unprecedented inflation levels. While the subjects of shelter beds, sweeps, and supportive housing fueled fiery discord across party lines, whether any of those words will give way to action remains a lingering hope yet to be seen.

On the other side of the NIMBY vs. YIMBY debate was the subject of international warfare, with politicians divided over whether or not to continue dispersing long-term support for Ukraine. From boots on the ground to fists in the air, the tension is thick, at times even confusing.

There is, however, one topic that encompasses all of these points.

At the intersection of war and wages, on the corner where the housing crisis meets the mental health epidemic, sits the homeless soldier. And while the 2022 midterm election might be over, veteran homelessness persists, a patriotic fallacy hidden behind a flimsy façade.

How Many Homeless Veterans Are There?

The National Coalition for Homeless Veterans reports that PIT count volunteers identified more than 40,000 U.S. veterans living unhoused in the United States on any given night of the year. This number, a drastic undercount by all measures, exhibits a vast overrepresentation.

While veterans account for just 7% of the U.S. population overall, they currently comprise 13% of the homeless population. Serving your country at this point is like signing up for a lifetime increased risk of homelessness. And while HUD numbers indicate a drastic decline in veteran homelessness since 2010, a subtle uptick in this subset of the population took place in 2019.

In theory, the homeless soldier should serve as a reminder to us all. The United States of America places a significant emphasis on military defense, coveting the top spot for military expenditures worldwide. When the federal budget maxes out at a jaw-dropping $742.3 billion to support armed conflict, the fact that soldiers returning home from those wars can barely afford to reside in studio apartments seems unfathomable.

However, this is increasingly becoming the case.

The Wars They Fought. The Scars They Carried Home

47% of the veteran homeless population consists of Vietnam Era soldiers. Another 15% of homeless soldiers served in the years leading up to Vietnam. Given that the average Vietnam Era enlistment age was 22, this means there is a crisis of not only homeless veterans but also, more accurately, homeless, elderly veterans relegated to the cold, hard streets.

Almost three-quarters of these homeless veterans spent at least three years in the military. Many were stationed in a war zone.

For over half the homeless population, the initial war they fought was 50 years ago, yet they continue to pay for their military service now and quite frequently with their lives.

The remaining soldiers who returned home and became houseless were stationed in places like Iraq, Afghanistan, and Panama, to name a few. For them, the war is far from over. The struggle to survive is merely taking place on different soil, namely, the soil they call home.

Barriers to Housing for Homeless Veterans

Serving homeless veterans has proved a difficult endeavor in modern times. While many of the leading causes of veteran homelessness are identical to houseless people who aren’t veterans, some causes are unique.

The emotional trauma of living in a warzone means that 80% of veterans experiencing houselessness are stricken with a mental health or substance abuse disorder. This is statistically much higher than the rest of the unhoused population. Often these conditions are caused by the psychological impact of living amid violent conflict or engaging in traumatic events.

The National Institutes of Health reports that social integration poses great difficulty for soldiers, particularly those who serve at young, impressionable ages. The difficulties of reintegrating into “civilized society” after witnessing such high levels of violence pose lifelong obstacles for soldiers who often lack peer support, spousal support, and familial support. They are left to rely on a government that only valued them when their bodies were being used for active combat.

Feeling distraught and discarded from the very country they solemnly swore to protect can be detrimental to self-esteem.

Did you know that veterans who experience homelessness exhibit suicide rates 11 times higher than housed veterans who witnessed the same battlefield traumas?

This fact speaks volumes to the devastating psychological effects of homelessness and how they tally up to other comparable tragedies like war.

Talk to Your Legislators About Ending Veteran Homelessness

Support for veteran homelessness has had a massive impact over the past ten years. But with tens of thousands of former soldiers still living unhoused, more activism is needed. Talk to your local legislators about drafting laws that favor soldiers by making housing a human right.

Connecting people to housing is central to the work to end homelessness. Providers also have a responsibility to connect people experiencing homelessness to mainstream resources. Accessing the income and health care...

Does it Really Take 7 Men with Guns and Tactical Gear to Measure a Tent? Over the summer, an authorized campsite in Missoula, MT, was regularly patrolled by groups of men from Rogers International, a private security...

Homeless service providers shouldn’t have to worry about becoming homeless themselves. Yet, with provider salaries that struggle to keep up with the cost of living, and organizations that struggle to maintain a burnt...