Violence Against Homeless People Escalates in Nashville and Nationwide 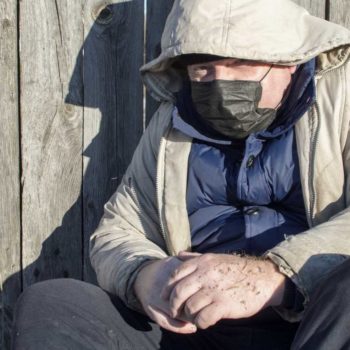 Disclaimer: This article contains graphic depictions of a violent scene.

“In Nashville, we’ve seen so many folks experiencing homelessness be the victims of violent attacks whether they were shot, or rolled into the river, or beaten unprovoked.”

~Activist and Nonprofit leader Lindsey Krinks on the state of violence against Nashville’s homeless community members.

Imagine finding yourself in the horrible position of having to sleep on the stairs of a public building. Imagine the heartache of each painstaking step, the way the cold, hard staircase would feel against your skin. How exhausted you would have to be to actually fall asleep in such a position, propped up on a public stairwell in a Tennessee city at 1 o’clock in the morning.

Now imagine you are woken by a brutal beating. Your face becomes wedged between the staircase and the piercing metal bottom of a scooter. You look up and realize your attacker is an unknown man who appears to be beating you for the sole reason that you exist.

This is what homelessness in America really looks like.

August 3rd of this year marks another gruesome event in a series of violent attacks against members of the homeless community. There are some critical points related to this incident that are emblematic of a typical situation. Those points are as follows:

Metro Police concur that this particular incident was unprovoked and that the alleged perpetrator has yet to see a courtroom, let alone a conviction. As new evidence is gathered, details surrounding this event could change. But the more things change, the more they stay the same.

Advocates in the region claim this is far from an isolated incident. Harrowing descriptions of homeless people being shot and tossed into open waters like cargo abound. Could lack of justice be the driving force behind such vile attacks?

Perpetrators who commit crimes against individuals experiencing homelessness are rarely convicted or sentenced to time in prison. In a separate but recent incident, two men who beat a man they presumed to be homeless to death with their bare hands were acquitted simply for being too drunk.

It was later revealed that the victim was not homeless. However, the stigma attached to his name carried on long after the brutal murder took place. And while it is a proven fact that people experiencing homelessness are more likely to be attacked than they are to be attackers, the media continues to spread one-sided jargon that perpetuates the opposite of this truth.

In LA especially, but also all across the nation, homicides against people experiencing homelessness continue to increase at alarming rates. When stories of gang violence against the homeless community emerge, they are often reported briefly, avoiding gritty details. When stories of homeless people engaging in life-sustaining activities emerge, these acts are oft-portrayed as criminal offenses. Due to this grave miscarriage of justice, people experiencing homelessness are winding up behind bars for merely existing while people committing violent acts against them roam free.

More Must be Done to Protect Homeless People from Housed People

At the time of this writing, individuals experiencing homelessness are still not legally protected as minorities. This means that crimes committed against them are not tried as hate crimes. Vulnerable and unprotected, many of them will die violently. Too many already have. And when it is time for outrage, the world responds with silence. What are we really saying? We are saying we don’t care. We are saying it with our inaction, which can be just as fatal as a deadly blow.

Homelessness in and of itself is an act of violence against an individual. Human beings are known to need shelter to survive. Nobody should be subject to the dangers of trying to survive with no safe place to call their own. Please take a moment to consider the magnitude of these events, of human beings being shot and bludgeoned, mocked and beaten, and, perhaps most heartbreaking of all, banished to sleeping forgotten on city staircases across the world.

Contact your representatives today and tell them more needs to be done to prevent the desolate state of homelessness before it even happens.